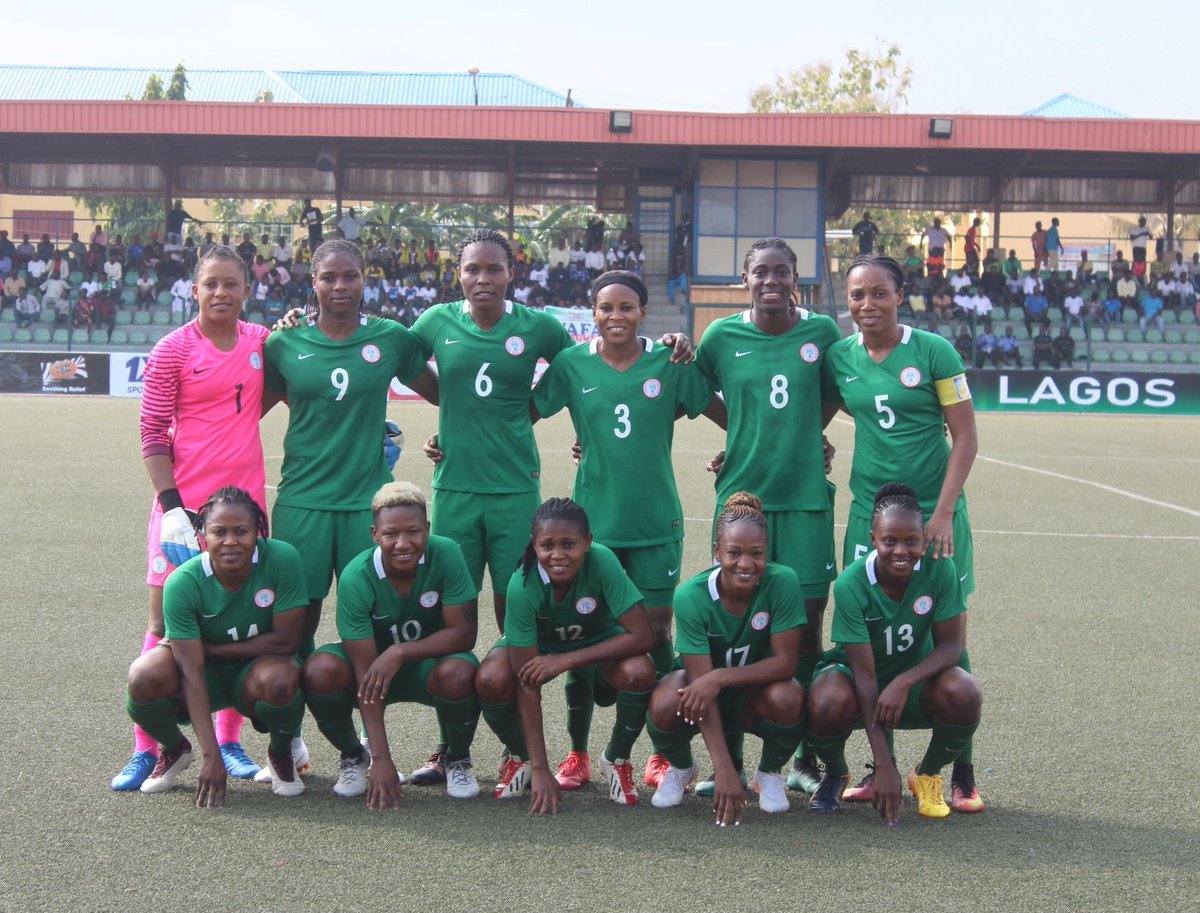 This week, we saw several of our faves winning. Even when they lost, like in the case of the Super Falcons, they still won (the Super Falcons qualified). MC Oluomo met the governor of Georgia and Rihanna went day drinking.

All in all, it was a quiet week, and no one was up to much trouble. Here’s what went down.

Nigerians Were Not Happy with World Cup Commentator

Because we like to be consistent, we’ll use the proper word: Nigerians harassed Jenny Taft, the commentator who oversaw the Nigeria Vs. France Women’s World Cup match.

It looked like Nigeria was going to get away with a draw, the women defending bravely. But that was until the 79th minute, when France was awarded a penalty. (VAR did ojoro. Yes, we said it.)

After our young and brave goalkeeper Chiamaka Nnadozie saved the penalty, the referee showed her a yellow card, saying she flouted some bogus rule (can you tell we’re pained?). Anyway, what people found the most upsetting was what the commentator was saying. And because they could not do anything about the results of the game, they decided to take out their frustrations on her:

You messed with the wrong set of people! We won’t let you off easily!

I don’t blame you sha! You can’t do any better. When God requested for heads to insert brains you submitted your trailer park called mouth/teeth. If broken into pieces it will roof a bungalow! Oloriburuku omo!

Terrible commentary. Very unprofessional. Highly disappointing. Too biased. I can’t believe this would happen in this age. You need to be sanctioned.

She said a lot, in 90 mins of commentary, she was biased against Nigeria, condescending, and didn’t want to keep quiet about our keeper being 18 like it was a disability. While constantly praising the French like she’s their head of PR

But then again it’s not your fault.. Its totally of fault for coming to play your World Cup… And I know we with our two left legs we’ll still come next time?

Sis needs a Yoruba man to reset her brain.
Very unprofessional commentary, i didn’t watch the match but the videos online clearly shows you were bias. We expected more from you, i hope the relevant authorities investigate and sanction you if found guilty.
No to Racism!!!#NGAFRA

You sure were way too excited to talk down on Nigeria every chance you got! Hope you got the love you were craving so bad from the French!

It was the premiere of The Bling Lagosians this past weekend, and the theme was #EkoForShow. While so many of our celebs looked flawless (see Cee C, Alexx Ekubo & Anto), a few others just looked gbef, with one person in particular reminding us of a Mortal Kombat character.

Here’s what the people had to say:

Today MY best dressed are Berverly , Ceec, Ifu and Anto. Read carefully I said MY. So you can have yours oooo . They interpreted the theme very well #BBnaija #TheBlingLagosians

Ma Lanre never disappoints. I present to you her Royal Majesty, the King of all slayers. CYNTHIA NWADIORA… Simple yet sophiscated, Eko for Show no buts. #TheBlingLagosians #EcobankPayBlingLagosians #bbnaija # teamceec pic.twitter.com/aOtRu9g57D

I think that T’s suit was made to be over size, same suit wizkid wore for his show last time. That’s the style now i remember. #TheBlingLagosians #bamteddy #bbnaija

Power couple
Royal couple
King and Queen
Blue print
They lead
Supporting each other since 1908
Couple that work together
Slay together
They are taking over the industry positively
Individually and collectively #BamTeddy #bbnaija #theblinglagosians #BlingLagosians pic.twitter.com/8PW4HOGwF5

sitting pretty like d Queen dat U Are, U keep inspiring me right fr wen U re in d house, up till date,all d wishes nd prayers offered ,U mk it works easy, thanks for making us all proud, dis is jt d beginning, d lord is ur strength ??.#bbnaija @bammybestowed #theblinglagosians pic.twitter.com/6uihfNOtFV

8. Michelle Dede brought it all! Self styled in Ejiro Amos Tafiri. She looks phenomenal. Totally here for all of this!; from The Sia-Like headpiece to dress and those shoes. I can’t even fault this look. Love the colors, love the style, love her. pic.twitter.com/EcucjQWvT6

It’s six months into the year already, and South Africans are reviewing how it’s been so far for them. It’s hilarious.

#HalfwayInto2019 i haven’t even completed one of my new year resolutions??? pic.twitter.com/STcGPo3ZGS

I did a mentorship at 5fm.
I did job shadowing at Radio Today.
I got my learners License.
My mom got me a wig.
I won Earphones.
My academics are doing well.
I started a blog.
I voted first time.
Most importantly God has kept me alive. ?????

#HalfwayInto2019 and I have only went to church twice ?. pic.twitter.com/bh9ZCVEm63

#HalfwayInto2019 but success is taking too long to arrive?? pic.twitter.com/aA5gUlKw5C

#HalfwayInto2019 I’m still poor with no option to exit!!
I hate this!! pic.twitter.com/pm0REzRqJJ

We #HalfwayInto2019 my sister is still wearing her engagement ring since 2009 must i tell her or??? pic.twitter.com/p26uIBUwtd

My salary still lasts me for only 4 and a half days…. pic.twitter.com/HRndv9QC9z

#HalfwayInto2019 and I still scared of pronouncing ‘Huawei’ in public pic.twitter.com/crkutX7Bc1

Runtown be Taking a Stand!

Singer Runtown has been quite active on Twitter, and he’s letting everyone know where he stands on issues regarding politics and what’s going on in the country.

From the Maiduguri killings to the Sudan massacre, and even the ban of Sniper, Runtown has continued to wade in.

We want peace in Sudan pic.twitter.com/RtVTvJiqg8

There was a triple suicide bomb attack in Maiduguri just two days ago that took the lives of up to 30 people?

Reading about it and realized that it was covered by mostly western publications. Are these reports true? Why are Nigerian publications not reporting it? I am confused. pic.twitter.com/lOJhIZAB7s

It’s like going to dry up the Lagos Lagoon because people use it as a tool for committing suicide. To truly curb this epidemic, we must focus on the reason WHY people do it. https://t.co/kviyS5fNEy

Hard work pays, kids. If you work hard enough, instil fear in enough hearts, maybe you too will one day, like MC Oluomo, meet an American Governor.

Let’s see what the people have to say:

MC Oluomo and family with Governor of Atlanta Georgia.

If this is what thuggery would give a man, then how do you want to convince our youths to be responsible? ?

Ecc 10:7 I have seen servants upon horses, and princes walking as servants upon the earth.#Nigeria #BBNaija pic.twitter.com/Osz2nsF4uW

MIT, Massachusetts Institute of Technology is about to accept MC Oluomo son. Wow.

MIT is the best and the first institute when it comes to technology, discoveries and science. So MC Oluomo has such fantastic plan for his own son while using other to intimidate #Nigeria. ? pic.twitter.com/SaDCJkiylT

Me: I’m dropping out of school because I’m tired.

Mum: Tobi, what are you saying? Do you want to end up on the street like a common thug?

Me remembering MC Oluomo is chilling with the Gorvernor of Georgia: pic.twitter.com/k0gX6xvL47

“You promised to make me proud and you did” – MC Oluomo’s wife praises son after having best GPA at his school.

I wish all the agbero, NURTW members and thugs in Oshodi see this.

I don’t blame him, Oluomo had to use what he has to get what he wants.#Obasanjo #Nigeria #BBNaija pic.twitter.com/8SdCt1Dh6W

Some of u can’t get over your elitism. NURTW is a professional association like any other, if an officer of the Nigerian Bar or Medical Association was invited by the GA Gov, you’ll be fine, but because MC Oluomo is in a blue-collar industry union, you have issues.

Omo, what MC Oluomo has done for his kids is the best thing he could ever have done o. Took them out of Nigeria to be successful in the USA. One of his sons is going to start school in MIT mehnn. What????????????

“@its_readone: How do we explain to the Governor of Georgia that the man next to his wife is MC OLUOMO no 1 agbero in Nigeria. pic.twitter.com/CqEbG62Sub

The more reason ‘other peoples children and parent’ should ask themselves the critical question, how come MC Oluomo’s children are not in Oshodi, the same question people should ask politicians when they inspire them to violence and attacks on each other.

MC Oluomo the General in NURTW Is giving his children the best education outside the country. Whilst he’s being paid heavily as a tool to deprive people in Lagos of the best.

It’s a shame the blind political followers in Nigeria are yet to wake up from their slumber?

Of course, no one is surprised.

Anyway, thank God for video oo. In one of the gubernatorial debates in the rup-up to the elections, Sanwo-Olu had promised to tackle the Apapa traffic within the first 100 days.

Even after he was elected, while speaking during an interactive session with his classmates at the Executive Master of Business Administration class, University of Lagos, 1998/2000 set, he said he’d clear the gridlock within 60 days.

Now? Our governor has said he didn’t promise to clear the traffic. He said he promised to “review” it.

Speaking to State House correspondents in Abuja, he said:

They said that I mentioned during the campaign train that I was going to clear it in 60 days. […] What I said was that in 60 days we would review what was done but that does not take the fact that even if people give you dateline, it’s because they want you to do well and they want you to be able to be accountable for those datelines.

This was Sanwo-Olu on national TV, posturing and grandstanding about solving the Apapa gridlock challenge. It is an insult of elephantine proportions, to the collective sensibilities of Lagosians, that he’d so shamelessly deny his own utterances.

I don’t know whether it is Punch that is lying or its Sanwo-Olu that has a change of mind ? on Apapa gridlock fix?

Sanwo-Olu had said,”I’m going to take it very seriously. I believe that it is something that we are going to solve in the first 60 days of our government. Whatever is going to be required of us, we will take them out” OGA SANWO-OLU HOW WE GO TRUST U NOW?

On May 18, Sanwo-Olu said, “The Apapa trailer issue; it’s a campaign issue, it’s very serious. I’m going to take it very seriously. I believe that it is something that we are going to solve in the first 60 days of our government”.

Today the Governor claimed he never said that. pic.twitter.com/tHW7ikx3es

Without a doubt this is the funniest interview you’ll find of a celebrity. No other words needed. Here you go:

And that’s all for this week! Let us know in the comment section if we missed anything. Have a great weekend!

The Daily Vulnerable by Chude Jideonwo: Normal is a Loaded Word

Elizabeth Ajetunmobi: Try This Approach With Your Domestic Staff & Thank Me Later