Rejoice Abutsa: The Film Business in Nigeria – Lessons from The Bling Lagosians 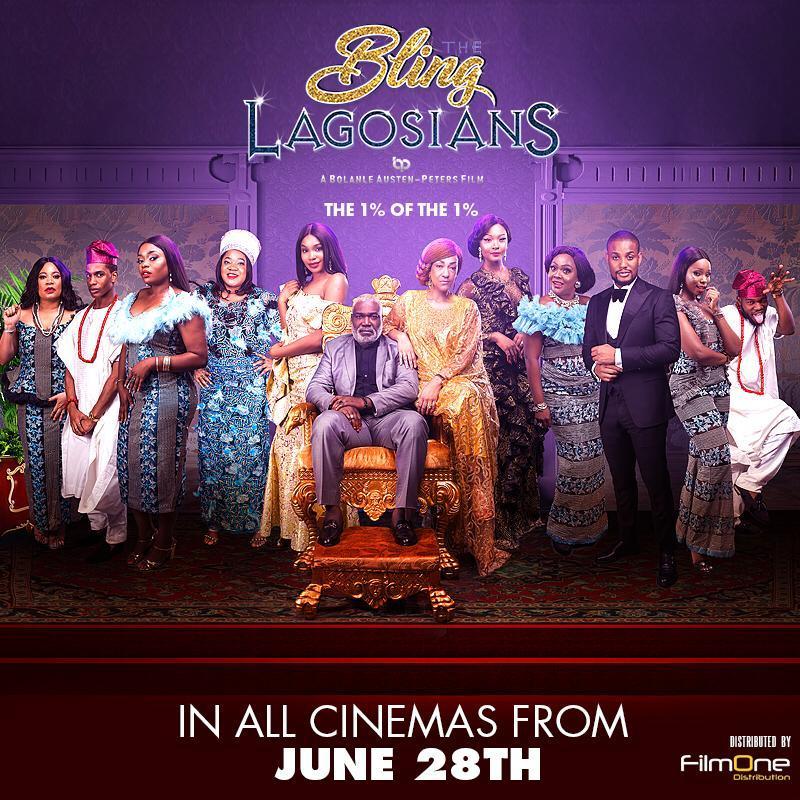 Every year, a small number of comedies become the bedrock of Nollywood’s commercial cinema. The Bling Lagosians is headed that way. With its release, Bolanle Austen-Peters‘ cinema debut intrigues cinema goers for its ability to separate itself from similar stories about rich Lagosians. The politics of wealth play a huge role to the storytelling, but, also, there is  an important tribute paid to the marketing/distribution funnel that paved the way for Nollywood’s cinema renaissance: the Asaba Market.

Long before Nollywood catered to the taste of its cinema audience, the Asaba marketers were instrumental in shipping movies to all regions in Nigeria, and even out of the shores of the country.

Marketers in Asaba green lit projects that featured some of our favourite stars, and in the time before social media, their form of marketing relied heavily on the success of past projects and the stars that featured in them. Even though Nollywood has segmented its audience, the Asaba industry remains strong, launching new faces to the scene and earning them financial independence from the success of their works.

To put it into perspective: The Asaba movies are ‘low budget Nollywood shot in Eastern Nigeria.’ If you look through the social media pages of the actors that feature in these films, their followership exceeds those that have become cinema ‘sweethearts.’ In terms of popularity, these films are watched more than the cinema films. Pricing plays a part because it is cheaper to watch Asaba than to visit the cinemas. Also, their audiences are scattered in places where cinemas are not available. For example, while people in Anambra or Kwara will be unable to see The Bling Lagosians because cinemas are not available in these states, they will be able to find the latest Asaba release around them, because the marketers have retained the old model of distribution to ensure their films go where they will be bought. Even in Lagos where there are more cinemas than any state in Nigeria, the Asaba marketers have created a movement, building a community and ensuring that the fans catch up on the latest releases.

In The Bling Lagosians, the focus on the Asaba industry is explored with Nnamdi (an Asaba film marketer) and Tokunbo (A Lagos based screenwriter). When Nnamdi invites Tokunbo and shares his idea of the type of story he wants to tell, he asks that she creates specific characters that will be played by Patience Ozokwor and ‘Aki and Pawpaw’. The reason he gives for this decision is that it would immediately become a blockbuster because it features these actors. They are household names and they influence the buying decision of the Asaba audience.

When she counters his idea, the filmmakers use the opportunity to explore the different audiences that support the Nigerian film industry. Asaba fans are not likely to drive box office success, but they will buy DVDs, watch on pay TV, and make even the most unexpected story a blockbuster.

The Bling Lagosians offers general business lessons, but for those of us in film, it gives back to the industry that the film is made for.

Through characters like Nnamdi and Tokunbo, Bolanle offers many lessons for doing business in Nollywood.

To break these into points, here are my top film business lessons from The Bling Lagosians:

Define Your Audience
Nnamdi, one of the top film marketers in Asaba, is ready to break into the cinema market in Lagos. His top goal is to satisfy his Asaba audience, find new ones in the Lagos market, and then merge them. He believes this strategy will enable him break into the Lagos market like he has done the Asaba market. He employs the skills of Tokunbo (Sharon Ooja), a screenwriter he believes will help achieve these goals.

In their first meeting, we see the value of defining an audience from the idea stage of making a film. Like a true business man, Nnamdi knows what works for his audience, and what set of people would watch his film.

His greatest asset, perhaps, is understanding the needs of Nigerians when it comes to entertainment. Tokunbo, on the other hand, has a goal beyond satisfying the Nigerian audience. She is a die-hard fan of Game of Thrones; she wants to write a film that is inspired by Game of Thrones because she believes that it will win her an Oscar and make her the best screenwriter Nollywood has ever had. But will fans of Nollywood pay to see a film with a Game of Thrones concept shot on a ₦50 million budget?

From the point where we realize that both characters have different interests, a subtle lesson on the value of understanding and defining an audience is established.

In a stirring scene, Nnamdi takes Tokunbo to a part of town where we see a crowd watching a Nollywood film. Indeed, this situation is typical in Nigeria, and to Nnamdi, it was a great way to show Tokunbo that Nollywood is not monolith. Its fans are scattered all around, and for each crowd, they have a taste that can be satisfied. All she needs to do is  connect with their desire for entertainment.

In summary, “Everybody” cannot be your target audience when it comes to making a film or as a general marketing rule. Taste differs, but for every niche, there are a number of people who are packed in the group. Those people can be your audience and make your film a success. Targeting an audience from the stage where you decide you will make a film has an influence to its success.

Refine the Concept
Maximise your best skills and do not champion the worst.

I have heard movie distributors advise filmmakers on the need to share their ideas before they progress with production. Earlier this year, I worked briefly for a film project whose life span was exhausted by the feedback from distributors, who insisted that certain scenes be re-written and re-shot to include certain details that appeal to cinema goers. They also required that the title be changed to stir interest. The filmmaker could have avoided this, if at the idea stage, the project was pitched to distributors who would have given the necessary feedback at that stage.

Distributors are in charge of  hundreds of films we see in a year. They know what interests the audience. Even for genres that are yet to be fully explored, they know what advice to give to ensure that the film achieves success at the box office. As creative people, we tend to be in our world, and sometimes we end up creating for just ‘us.’ Tokunbo was making this mistake with her Game of Thrones obsession. She wants an Oscar and she thinks the best way is to splash the ₦50 million budget on making a film like her favourite show.

Some Nigerians liked and saw every episode of Game of Thrones, but what percentage of those fans will watch a Nigerian film with a similar concept?

Keep the Audience Entertained
Aside from the flamboyance of the Holloways as established in the first montage, The Bling Lagosians delights its audience with a casting decision that will play a huge role to its box-office success. There is also a progressive story that is not your earnest happily-ever-after tale, but it will make you happy. And again, back to the scene where Nnamdi takes Tokunbo to see how obsessed Nollywood fans are with the content she considers ‘bland.’ All of these lead back to entertaining the audience.

I have observed that the Nigerian audience are not after the impossible when it comes to homemade entertainment. They want to relate with and feel the content they pay for. Our filmmakers do not lack the skills to offer this, and the film makes a case for this.

Recruit Trusted Advisers
The big betrayal in The Bling Lagosians offers general business lessons, and even for Nollywood, it says, “Listen to trusted advisers and avoid cutting corners.” In the journey of making a film, one of the greatest asset that a filmmaker can have is the access to trusted advisers that ensure that from the idea stage to distribution, the film appeals to its target audience. Some filmmakers offer a fee to script-readers to read and give honest feedback on a potential production. This way, the filmmaker is able to have a perspective other than the one they created with. Sometimes they reconsider or adjust certain choices. Doing this is never a waste. In The Bling Lagosians, the marketer and investors hear Tokunbo pitch the story. This is a process applied by some filmmakers, and I have seen it work for good.

Just like the patriarch of the Holloways and his advisers, the filmmaking business requires that the filmmaker find the right people at every stage to make a successful film.

“Loads of love king of my heart”: Joke Silva Celebrates Olu Jacobs at 77