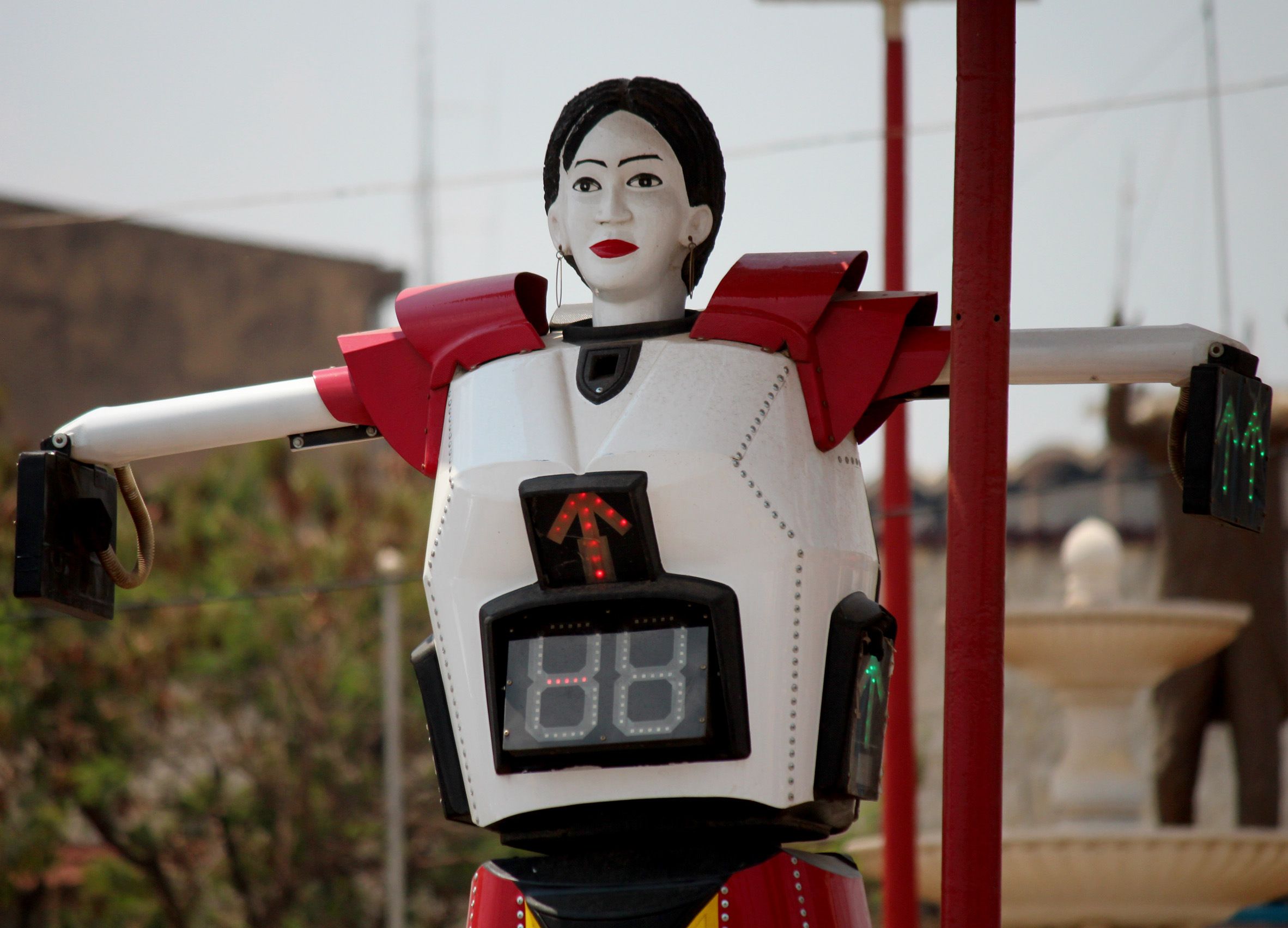 When Thérèse Kirongozi‘s brother died in a pedestrian accident, she noticed the number of road fatalities involving pedestrians – particularly amongst school-going children – was particularly high in her country. So she decided to “be the change”. Her giant robots have become a feature of her city’s streets and are credited with reducing road accidents across the country. Now she wants to install them far and wide.

“Science has no sex,” asserts Therese Kirongozi. She should know. Techie, engineer, designer and inventor, her list of accolades sounds like a wishlist for employees at a start-up. At 48, however, Kirongozi upsets a lot of stereotypes. Not only is she is all of the above, but she is also famous, thanks to her very public – and widely recognised – “traffic robots”.

After graduating with a technology degree, Kirongozi’s experience of a fatal road accident led her to design humanoid, intelligent robots to help direct traffic and make the streets safer. 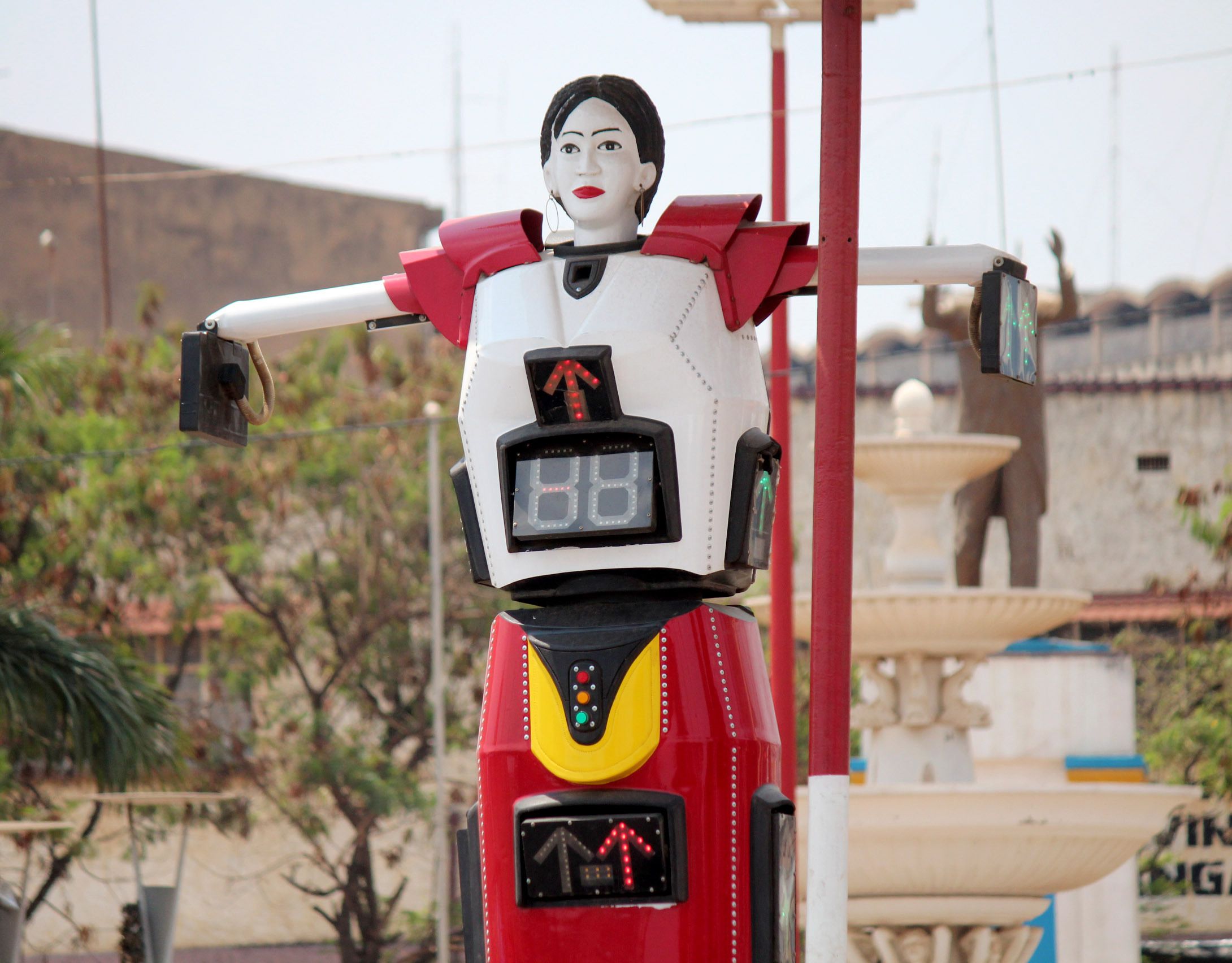 “The idea of manufacturing robots came from information I read in the report of the World Health Organization (WHO) on road safety for children; also because my brother died following a traffic accident coming from school when we were still in elementary school. I was very shocked,” she explained.

Made of aluminium and powered by solar energy, the robots weigh in at 250 kilograms and stand 8 feet (2.4 meters) tall. An arresting sight on the streets of several Congolese cities including the capital, they are not just for looks. With cameras placed in their eyes and shoulders and an antenna attached to the top of their heads to transmit data to a police control centre, they monitor and direct traffic. Their humanoid faces issue voice controls to direct pedestrians and wave their “hands” to direct traffic.

Kirongozi, who also leads the Women’s Technology Association (Wotech) in her country, has installed around 45 of the units across the country and hopes that in the near future, they will be installed in even more cities across the vast country. Her aim is not only to reduce fatal accidents but also to increase awareness of road safety. 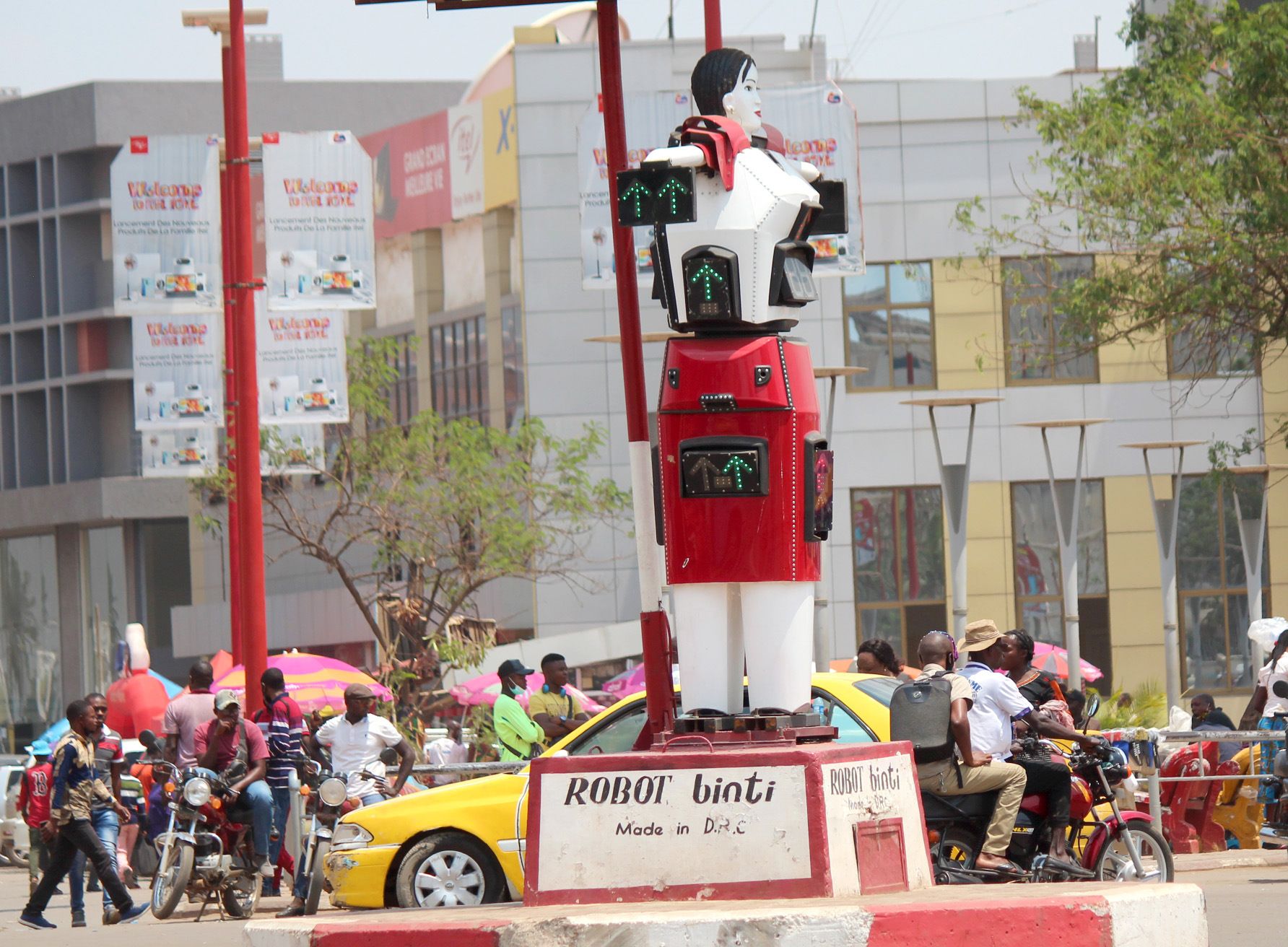 “Today we have reduced these accidents by 60 per cent, so for us, it is really something very important, that we have come to understand that road safety must be practised in relation to the regulations and in relation to the signals,” she explained.

The innovation could not have been timely. Residents of Kinshasa have for decades complained of many cases of non-compliance with the country’s Highway Code, leading to fatal accidents.

Kirongozi’s invention was first unveiled on Independence Day, June 30, 2013, when she exhibited her first robot to the public. She impressed government officials to such an extent that the country’s traffic police ordered 17 of the robots, which were subsequently installed at major city junctions in the country. 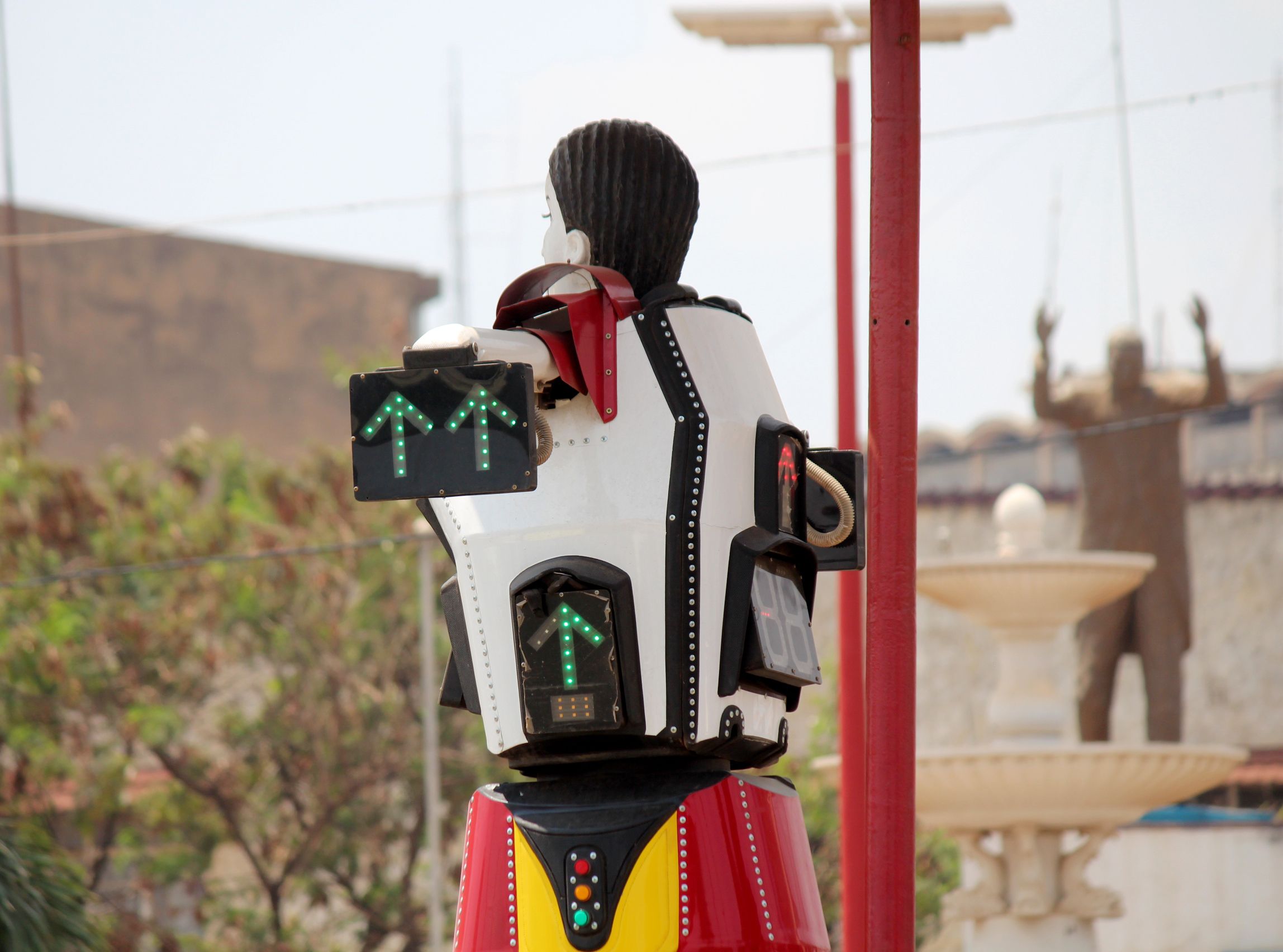 While 8 units were installed in Kinshasa and the others in the cities of Lubumbashi, Likasi, Kolwezi, Goma, and Bukavu, one unit even made its way to Brussels.

“The unit price for each robot is between 15,000 to 20,000 US dollars, because of the complex technology that we do ourselves, from manufacturing to installation, to the support of the training. technicians and maintenance,” Kirongozi explained.

She is now hoping to lower the costs of production through automation.

“This cost is because we make the robots in an artisanal way which is a bit expensive, but if we make it in an economical and industrial way we will really lower the prices. We are looking at how to transfer technology not only in the DRC but also in other African countries,” she said.

Kirongozi said she has been inventive since childhood. After completing high school, she continued her studies at the Higher Institute of Applied Techniques (Institut Supérieur de Techniques Appliquées – ISTA) in Kinshasa. After acquiring a diploma in industrial electronics, she completed her training in programmable automation and entrepreneurship through courses in the United States and Japan. 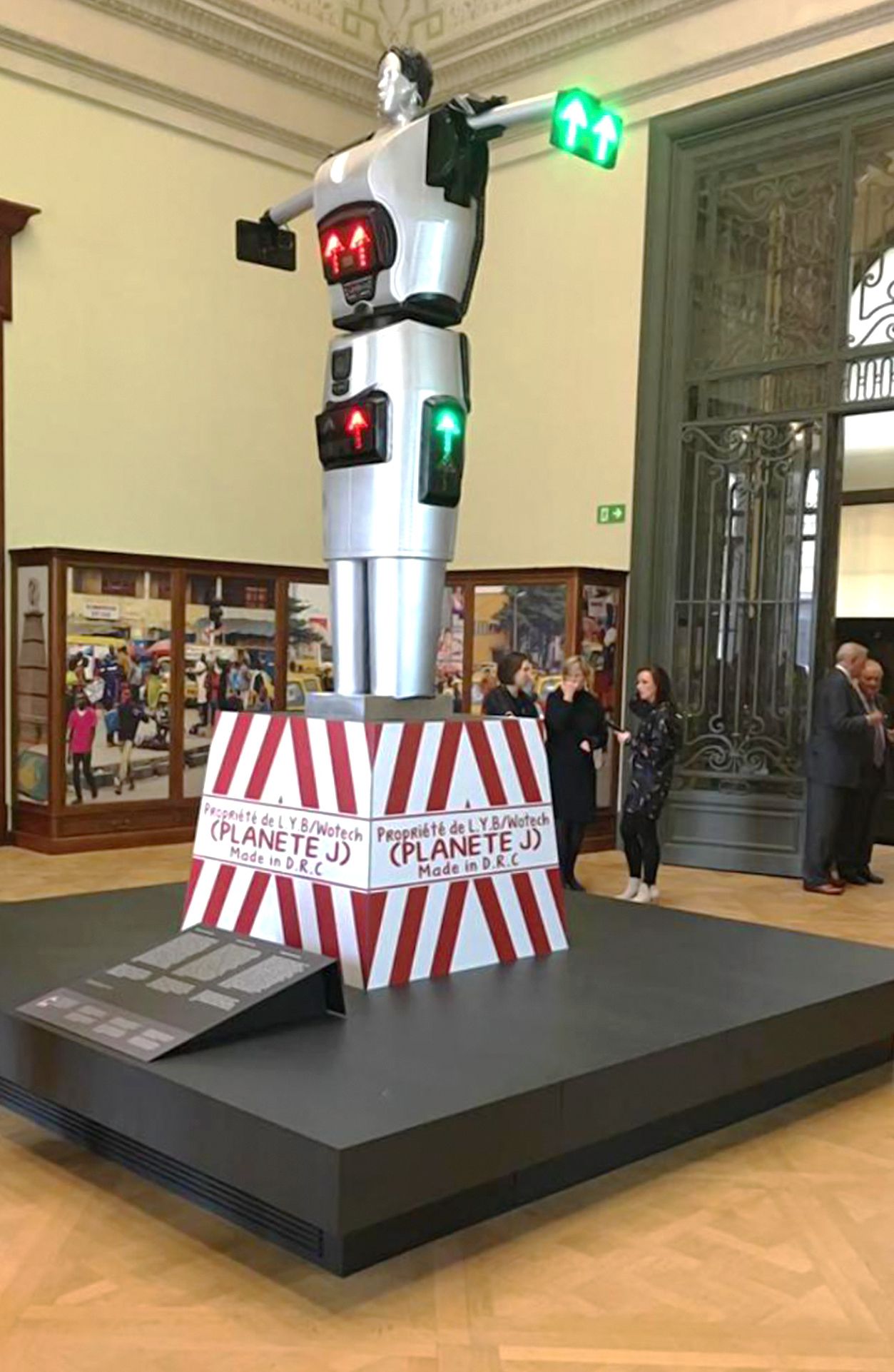 In 2011, she founded the Women’s Technology Association and began manufacturing her first robot. She and a team at the association have since expanded their scope of work to other aspects of technology.

“We are looking to find solutions,” pointing to social projects they are working on, like the challenges of providing clean water, the high incidence of pedestrian electrocutions in Kinshasa, and traffic management.

During the COVID-19 pandemic, the Women’s Technology Association manufactured automatic washing machines that were installed in public places, to serve between 2,500 to 3,500 people per day.

The association also partnered with Physicist Raissa Malu and the University of London to produce an emergency mechanical ventilator to be used in hospitals. 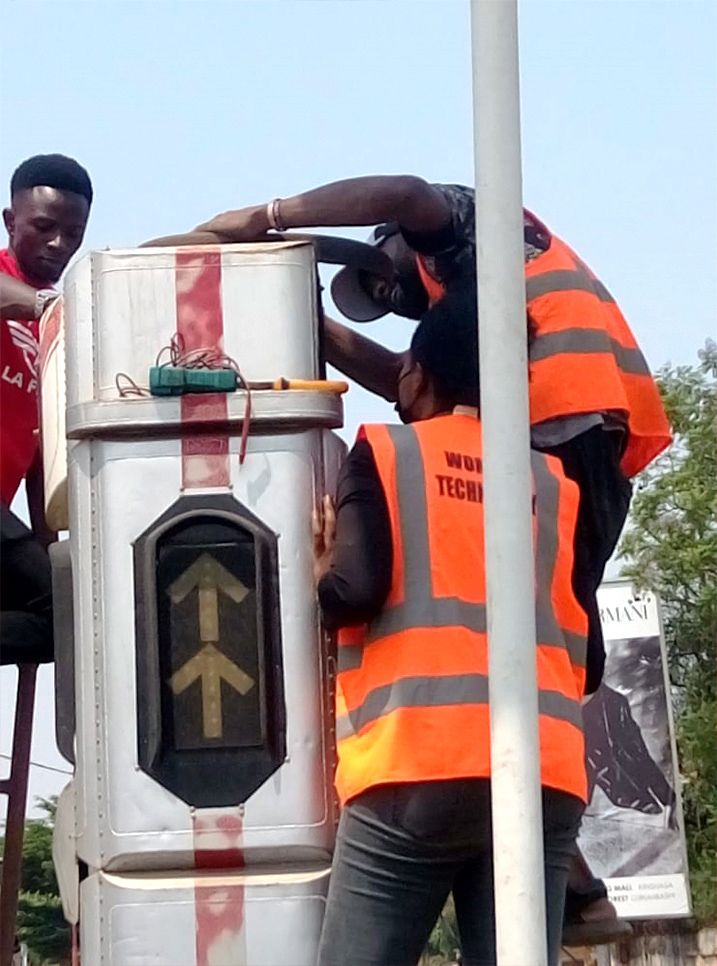 Kirongozi is encouraging more young girls to take an interest in science and technology.

“If we look at the evolution of the world today, the revolution of artificial intelligence, we are pushing more young girls to follow suit more at the university level in fields like science, technology, engineering and mathematics, because we have found that the future of mankind rests on this kind of option,” she explained.

“Robotics, astronautical engineering… is not made only for men and for me, I can say that science has no sex because we have the same formulas that we are given from elementary school to university, boys and girls alike,” she said, also pointing out that career choice needs to be forward-looking.

“We are in a very dynamic world. There are jobs that will disappear. For example, the bank will no longer need a lot of cashiers because it will be the robots that will replace them. It is up to us to know what jobs we can teach our children and above all how to be more entrepreneurial to create wealth from know-how, from technology, in order to help others.”