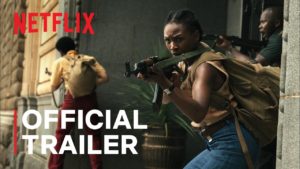 The first trailer for Netflix’s action-thriller “Silverton Siege” has been released. The South African film, based on a real event, follows three young freedom fighters and their tense confrontation with police, which helped start the Free Mandela movement. As the nation attempted to overthrow a repressive apartheid dictatorship, the siege proved to be a watershed point in the country’s turbulent history.

The Trio are all in agreement that someone, possibly one of them, is an “Impimpi” – a sell-out and police spy. The question is, who? In the bank, the pressure builds and tensions increase. Everyone engaged is fighting for the same thing: freedom. As the Trio realizes that their only alternatives are jail or death, they resolve to negotiate Nelson Mandela’s release.

Silverton Siege will be released on Netflix on April 27 to coincide with the South African official holiday Freedom Day, which marks the country’s first democratic elections after apartheid ended.