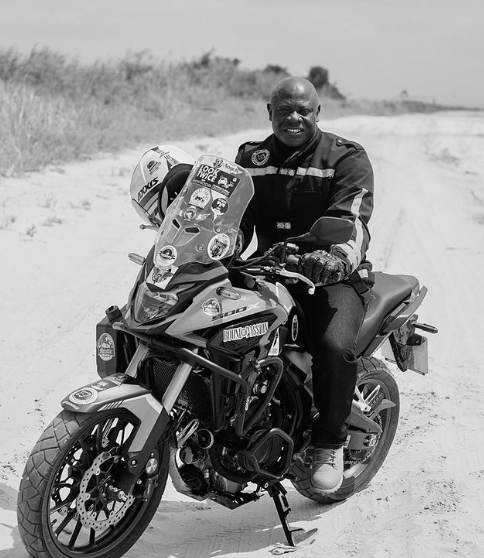 Entrepreneur Kunle Adeyanju is someone who leads by example. Riding through 42 cities in 13 countries, he has campaigned to stamp out polio and at the same time, see Africa for himself. What he found runs counter to prevailing narratives.

It’s 6am, the sun is rising and Kunle Adeyanju is getting ready for a big day’s travelling on his motorbike, Eagle – after just four hours of sleep. Today’s journey is different, though. It’s the celebratory leg of an epic 13-country tour and he’s heading to Kwara from Lagos, escorted by a group of fellow bikers, to be celebrated in his hometown for his successful journey.

It is barely two weeks since he arrived in Lagos, the final destination of an epic #LondontoLagos trip, and while Adeyanju may have reached his advertised destination, he is continuing on another journey – raising funds to ensure a polio-free Africa. Today’s ride “home” is part of that effort – a crusade that is both important for the country and intensely personal.

“My best friend Sanjo got polio when he was a child. It was a traumatic experience. Although he died recently, many years after contracting the virus, Sanjo’s health was never the same and I didn’t want someone else going through the same thing as he did,” Adeyanju explains.

In 2021, this entrepreneur and father of two decided to travel across Africa on a motorbike to raise funds in his personal war against polio and began charting routes and plans, reading up on the travel situations in the 13 African countries he intended to visit.

He prepared by reading widely, including referencing online resources like the CIA World Factbook, which has information and latest statistics on countries around the world. He made a number of “informed decisions” like not to visit Burkina Faso, based on the information he came across – decisions that would make him question the prevailing “narrative on Africa” later on. 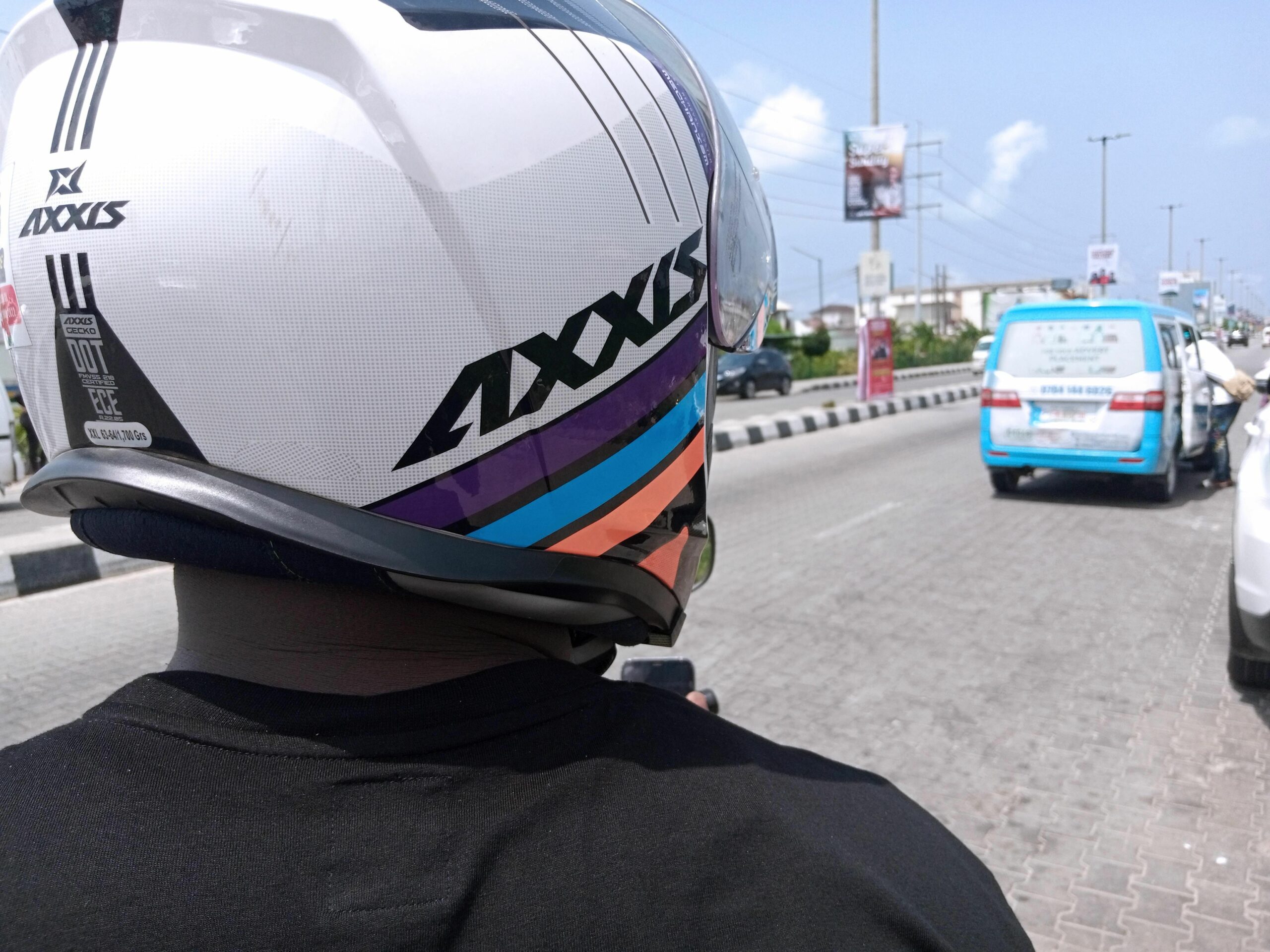 A self-proclaimed adrenaline junkie, Adeyanju has visited over 75 countries and plans to travel to more. Yet, he said, this experience was far better than jetting into overseas destinations.

“This ride has been the most exciting adventure of my life because I discovered humanity. I discovered a much richer story than posing with concrete or sitting in a high-speed train,” he explained.

Each country, he said, was unique in its challenges and its delights. The places he enjoyed visiting the most were Senegal, Mali, and Ghana because of the reception he got. He had the toughest experiences crossing the Sahara and in Mauritania.

“The Sahara is a very dangerous place to be. It’s hostile to life. I was in a sandstorm that lasted for 1 hour, 40 minutes. The gale force of the wind lifted me off the ground. To survive, I laid my bike on its side and burrowed myself against it so that my body weight (95 kilos) and that of my bike (190 kilos) became one. It was hot, I got injuries from where the sand hit against my exposed skin like needles.”

What kept him alive, he said, was his survival instinct – and his children’s instruction to: “Go on the trip but come back home no matter what.”

“I wasn’t fighting the elements. Transactions as a foreigner in the country were dismal. Their currency (the ouguiya) was 1 ouguiya to 400 euros until recently. Now, it’s 1 ouguiya to 40 euros. But I was unaware of the change and the locals ensure foreigners stay uninformed. Things were very expensive and beyond that, I was maltreated,” Adeyanju said of the experience.

Collaborating with the Rotary Club Ikoyi Metro, where he is currently president-elect, Adeyanju is crowdfunding to sustain the eradication of polio, and for the renovation of a primary health-care centre in Ikereku, a village in Oyo state.

Initially hoping to raise 20 million Naira (around 48,200 US dollars), in May he increased his target to 100 million naira (around 241,000 US dollars). He made the announcement on social media, urging people to donate via a bank transfer to the Rotary Club Ikoyi Metro or on GoFundMe. Adeyanju has promised to personally add ten percent of all donations, to the funding drive. 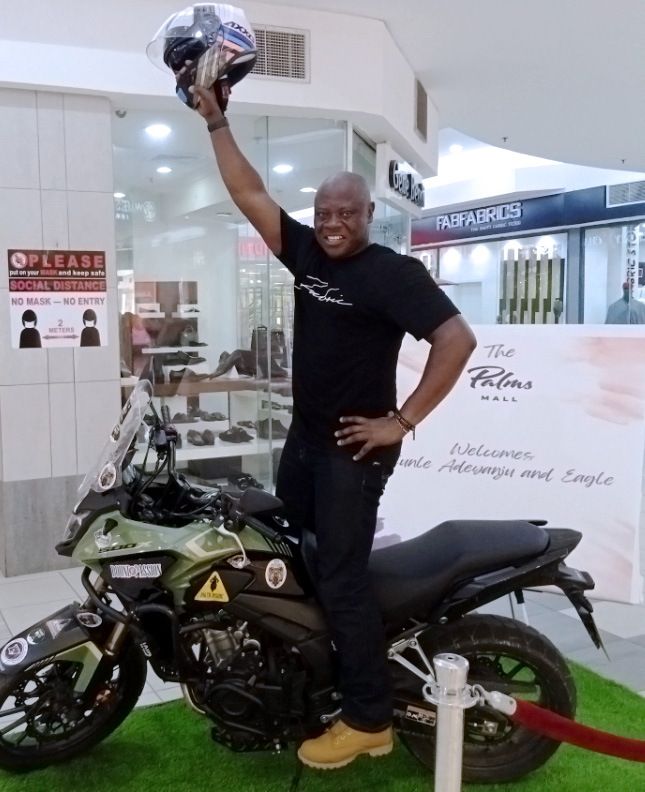 In August 2020, Nigeria was declared polio-free by the World Health Organization (WHO), making it the last African country to be free of the virus. But, according to Adeyanju, the only way to completely eradicate the virus and prevent its re-emergence is through continual awareness and vaccination against the disease.

His reception throughout the trip was encouraging. He was hosted by ambassadors, Rotary Clubs and individuals in several countries he visited. Additional donations were made by bikers and individuals in Abidjan, Côte d’Ivoire, Lagos, and Lome, some of whom challenged Adeyanju to engage in various activities.

Adeyanju hopes to finish a travelogue about his trip – one that will set the record straight regarding travelling in Africa.

“My book is 50% done, and will most likely be published two months from now. It details all the experiences of this adventure. After it’s published, we’ll make a film as well.”

Although this trip takes him a step closer to achieving everything on his bucket list, he plans to do more.

“A year from now, I will travel from Lagos to Israel. Then from Israel, I will travel to Tibet because I want to ride on the Tibetan plateau. After that, I will ride to Everest basecamp to climb the mountain,” Adeyanju said.

Years ago, after well over a decade working for international corporations, Adeyanju quit his job to focus on his philanthropic pursuits and adventures. With a TEDx talk and two books behind him, his current work advising businesses allows him the flexibility
he needs.

“I can’t do this if I’m tied down to a company, which is why I became an entrepreneur in 2018. Now, I’m able to adjust my schedules for adventures like this, working around it if I have to,” Adeyanju said.

He never misses a chance to keep everyone updated on his YouTube channel and Twitter page. Sharing his experiences on his blog, he said, was therapeutic, particularly during the difficult times.

“I read about the #LondontoLagos journey on Twitter, and I was captivated that there’s a route from London to Lagos by bike. I was also intrigued that Kunle Adeyanju was doing it for humanitarian reasons. I wanted to know more about it, so I followed him on Twitter. His updates have been very enlightening,” said Adetutu Ajiduah, a luxury sales expert.

Just like Olabisi Ajala, a Nigerian globetrotter popular in the 1950s, Kunle Adeyanju regards himself as an adventurer.

“My grandma nicknamed me Lionheart when I was ten. And I nicknamed my motorbike Eagle when I got it. Because, when an eagle meets a storm, it faces it, head-on, soaring higher. A lionheart can only ride on an eagle.” 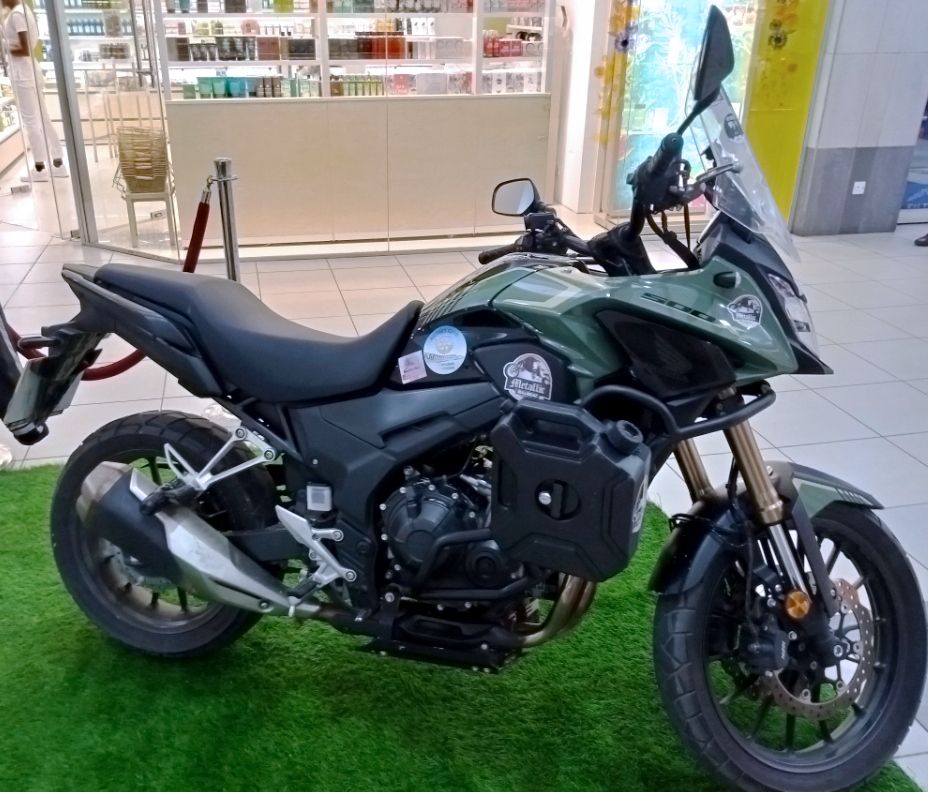 With philanthropist Bill Gates and Twitter CEO Parag Aragwal congratulating him for his efforts, the world is taking notice of Adeyanju’s initiative.

Marketing is a key component of the Adeyanju’s strategy. Upon his arrival in Lagos, Adeyanju collaborated with Radisson Hotel and The Palms Mall to have a “meet and greet”. Tunde Muyibi, Marketing Manager for The Palms Mall, shared his excitement about Adeyanju’s trip.

“A lot of us don’t know our continent as well as we should. But, through his journey, we could learn more. Kunle Adeyanju is our modern Ajala the Traveler,” he said.

The big take-away from his adventure, however, is how wrong the narrative on Africa, actually was. The reality on the ground, was very, very different, he found, as he made his way from country to country.

“One thing I learned on my journey is that there is a need to tell the true African story. We are a diverse and friendly people. The negative narrative peddled about us around the world is untrue,” Adeyanju says.

In the end, he ventured into Burkina Faso while waiting for an entry visa to travel through Côte d’Ivoire.

According to him, Burkina Faso, a place described as “dangerous and unfriendly” by the CIA World Factbook, turned out to be very welcoming and safe. He was glad he had embarked on this journey to learn and experience diversity and the true spirit of African hospitality.