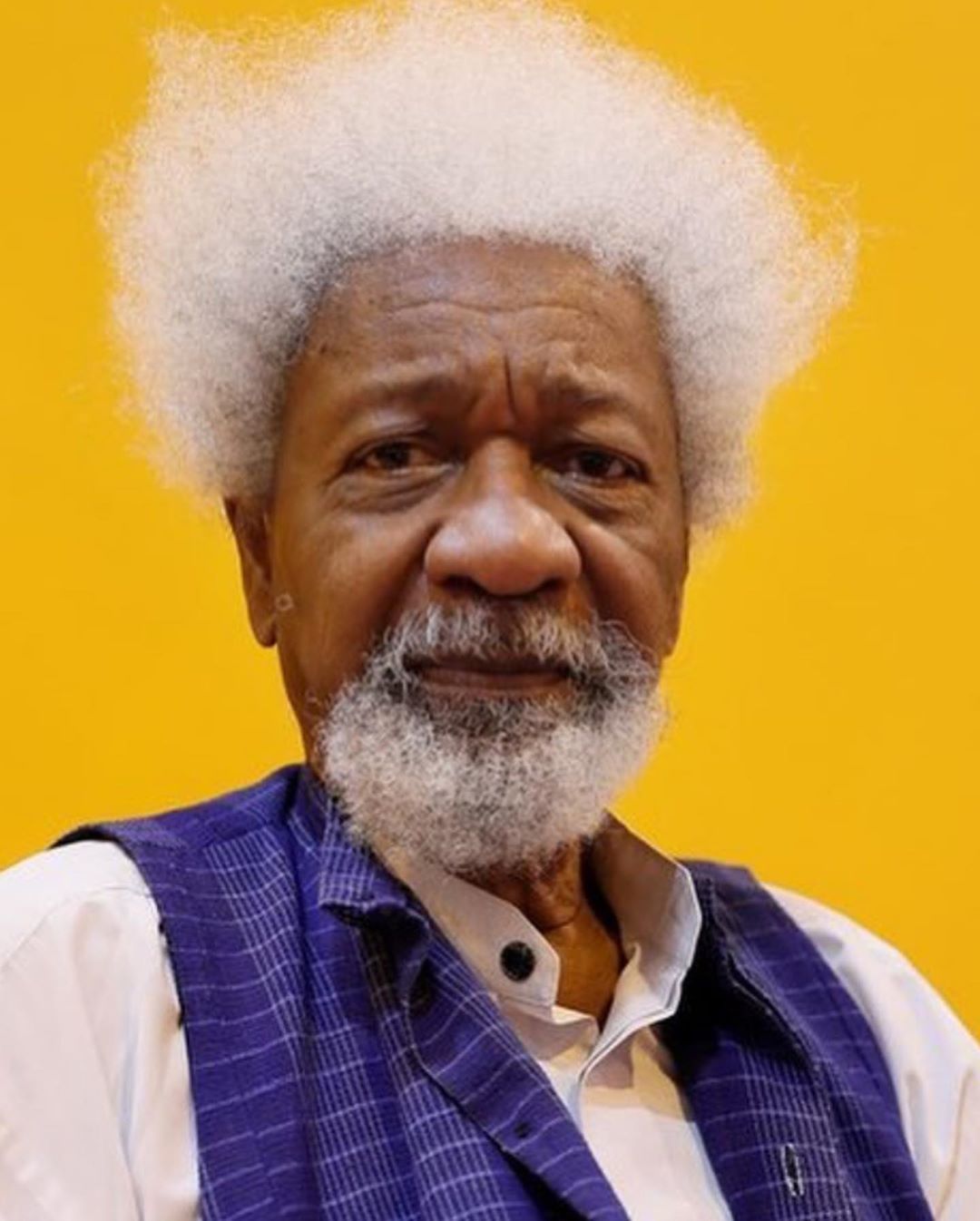 For me, giving people their roses while they can still smell them should be mainstream culture; Akinwande Oluwole Babatunde Soyinka certainly deserves all his flowers. Isaac Newton famously declared, “If I have seen further, it is by standing on the shoulders of giants.” It’s safe to say that thanks to the literary prowess of Wole Soyinka, I was able to realize my dreams and make a career out of writing, among other things. I chose literature over geography in high school when both subjects were electives because of this sage.

I was very fortunate because even when we grew up in the trenches, our family always had a strong priority for education. At a very young age, I had read some of Wole Soyinka’s titles even though I didn’t fully grasp the depths of his most profound thoughts at the time. We had a library of books occupying a significant part of the room we lived in and from those pages, I began building perspectives that would, thankfully, shape my cognitive processes to this day.

Many a time, people tend not to realise the value of a genius’ works in real-time; it’s mostly in hindsight that they begin connecting the dots of the person’s ingenuity. From his rich repertoire and literary catalogue, I want to highlight some titles that give me some sort of déjà vu, especially in the context of the times that we live in. It makes me wonder whether history repeats itself regardless, or whether history repeats itself because people simply never learn.

Many young readers may not have known that Wole Soyinka wrote this critically-acclaimed prose whilst in prison. Far from being a greenhorn in political activism, he used his skill to speak against the injustices perpetrated and state-sponsored violence by the government of his day. He was arrested for rebuking a pogrom and trying to ease tensions between warring sides.

The title is both an ode and a reference to his friend, a journalist, who died after being ruthlessly assaulted by agents of the state. More importantly, the title rises beyond its literal description of a man’s death into a metaphorical universe where he describes the death of a man who has effectively died even though he still draws breath from God’s green earth. That man is figurative for a person who keeps silent in the face of tyranny and oppression. Unfortunately for such persons, there are no middle grounds as far as Soyinka is concerned, complacency is a vote for the oppressor.

The book speaks to the fraudulent attempts by certain persons to insist on peace and unity while being curiously silent on the need for justice. He insists that justice is the first condition for humanity. Soyinka also gives a nod to the bravery, courage and resilience of a people who from the ashes of desolation rose like a phoenix to those who fell to protect the light of freedom. He lauds the indomitable spirit of a community upon which the sun has risen on their land even as they will never forget a cruel history of heinous acts perpetrated against them.

Chronicles from the Land of the Happiest People on Earth, 2021

If the sarcasm from this title doesn’t jump at you, then I am afraid you may never enjoy a satirical piece because that’s exactly what Wole Soyinka did with this book. No surprise it was one of my top five recommended books for 2021. Describing Nigeria in hypothetical terms, the novel exposes the entrenched corruption of the political class, the religious gatekeepers, the indifferent middle-class, and other nondescript groups. Using rib-cracking humour, he brilliantly describes the dysfunction that the state has been enmeshed in.

By deploying well-crafted innuendos, he established the modus operandi of a corrupt establishment that throws everything including the kitchen sink just to maintain its grip on power which also includes the systematic alienation of competent people from running the affairs of the country. It’s a subtle jab at some unfortunate surveys and puerile attempts to foist a narrative of Nigerians being the happiest people on the planet when the reality is that they have been routinely dehumanised, have poverty and illiteracy weaponised against them, and have their votes rewarded with perennial misgovernance.

If you are neither abreast with the workings of the Nigerian system nor able to recognize the signatures of Wole Soyinka’s unconventional style of writing – you will miss out on the inside jokes contained in this book. You could almost draw real-life parallels with characters such as Pitan-Payne, Dr. Kighare Menka, Godfrey Danfere, and Papa Davina or at the very least, understand them as metaphors. Perhaps, not an average reader’s delight – you must love literature to bury your head in the 400+ pages of this book.

In this light-hearted play, Soyinka aims at religious hypocrisy and manipulation. Not that he is in any way averse to a multi-religious society but he shines a light on the disingenuous manner in which adherents of certain faiths are abused by very unscrupulous figures. Sharing the sentiments of a statement credited to Karl Marx, he also suggests that religion is indeed the opium of the masses. Wole Soyinka curiously documents how gullible the average person is and how their being jejune is the fodder for such charlatans to thrive.

Brother Jero is a character that professes himself to be a prophet and projects an ascetic lifestyle but that is all a ruse because he is anything but pious – he is as dishonest and uncouth as they come. For Jero, he has been able to develop a business model from faith and endlessly feeds his followers (customers) with eargasms and placebos that ensure that they remain subservient. This book isn’t so much a criticism than it’s a nudge – an attempt to awaken sensibilities from the slumber of psychological laziness. An example is a belief that prayer is a substitute for hard work or the idea that God can be co-opted by our demands. In the final analysis, the greed of the exploited also counts as incitement against them.

The Beatification Of Area Boy: A Lagosian Kaleidoscope, 1995′

In this book, Wole Soyinka takes the phrase, “theatre of the absurd” to new heights. He describes in detail the institutionalization of lawlessness in a city known for a very curious socio-political culture. He uses a character such as Sanda, the king of area boys (street urchins) to typify a system where ignoble elements are given notoriety and inducted into the mainstream of society whilst those who have a modicum of decency are haplessly relegated to the background – he submits that this cul-de-sac is not a bug, it’s a feature.

You may have heard that narrative that the average ‘intellectual’ is a fraud, not so much for committing actual crimes per se but for their cognitive dissonance at critical times of our society – well, Soyinka called it many years ago. As you may have seen for yourself, many people were never interested in good governance; they were never against oppression or corruption – they just wanted the status quo to benefit them. Soyinka calls out the complicity of these faux intellectuals; their unholy alliance with those who flourish on the blood, sweat and tears of the masses. He points out with finesse the conspiracy of those in power and how they orchestrate events to further their selfish interests.

‘Penkelemeesi,’ a word which is colloquial for the phrase “particular mess” was largely ascribed to Adegoke Adelabu, who was a community organizer, orator, and politician. Using his alter ego, Maren, this memoir by Soyinka of his life between 1946 and 1965 accentuates the phrase to draw attention to the events that transpired from his school days in Ibadan to his experiences in faraway Leeds.

This book particularly reminds me of the state of affairs in the country touted as the African Giant, and how bad leadership has historically connived to keep us in this particular mess. We fell off. Some years ago we were tipped to become a superpower but here we are, grasping at straws. The books highlighted here should remind us that this isn’t a sprint but a marathon – some of the things people like Prof. Wole Soyinka have been saying even before I was born. The next few months will determine whether we will inch closer to redemption or drift further away from it.

I just thought it befitting to celebrate this force of nature and living legend. My elocution and erudition surely pale in comparison to his. To be a man that has inspired a whole generation of writers and others in sundry endeavours truly is his greatest legacy.