Kanayo O. Kanayo Speaks Unapologetically about Politics in Nigeria, Religion & His Roles in Nollywood in this Interview #WithChude 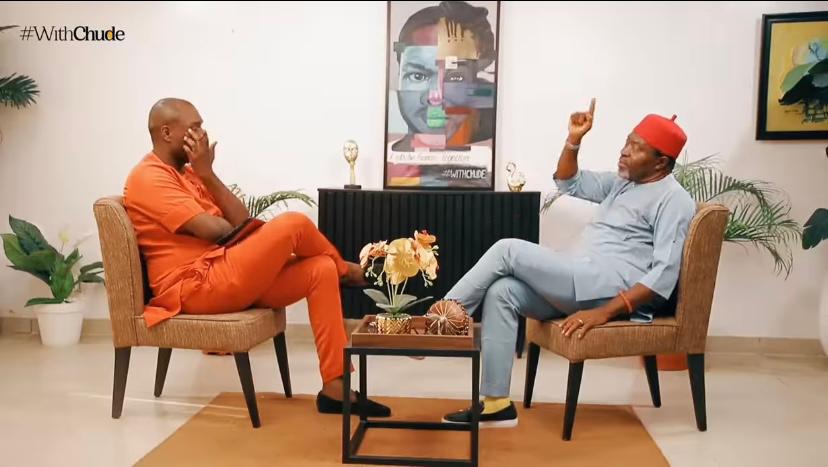 In this episode, Nigerian actor Kanayo O. Kanayo had a lot to say as he shared his perspective on different topics in his interview with Chude Jideonwo.

The veteran who has been in the Nollywood industry for more than two decades spoke unapologetically about so many societal issues.

On the type of roles he plays in Nollywood:

No, the ‘sacrifice’ memes don’t make me feel uncomfortable, in fact, you’re a good follower of Christ. Because what I found out along the line is I have done ‘Lion Heart’, I did ‘Professor Johnbull’; just name it! ‘Upnorth’, and so on and they had nothing to do with going to do juju and all that stuff. Because the actor has to be flexible.

If they try you in this role as a presenter, the next one they should give you a mechanic. How well have you performed in that mechanic role is what should concern your audience.

And I think it’s only in Nigeria – not even Africa – that this type of casting is an issue. If you look at Sylvester Stallone, he would always be the bad guy. Look at Arnold Schwarzeneggar. That’s what it is. They don’t see it as a type cast.

They look at the flexibility of the actor in that role he’s playing and not about you did a hard guy here and there. That’s how Nigerians qualify you and that’s not good for those of us in the profession.

So for their Oscars and so on, they look at you from the role you played and not whether it’s the same thing with the other role you played. There’s always flexibility in what an actor is for this role and what he’s playing for the next role.

Politics in Nigeria, the presidency and IPOB:

I should be able to talk to the President like he’s my father. If a system becomes dictatorial, like our brother Dino Melaye would say, ‘you talk you die, if you no talk you die so, why don’t you talk and die?’

So, for me, I didn’t insult the President. I didn’t call him out. I just made an appeal that I needed a 60th birthday present and I have had many Nigerians commend me for that. What I have been saying after that broadcast is the South-East continues to be under siege. There needs to be a dialogue by the Governors with IPOB and so on and so forth.

If you look at the sit-at-home order, it is very effective but they have told the press not to report it. Why were Government buses not on the road on Monday, that’s what I’m saying. But they keep on feeding the President with the wrong information and that was what led to the rise in Boko Haram. We saw it as a Northern problem, now it has swallowed the whole country. You hate Igbos, you say Nnamdi Kanu must die and so on, you say this and so on. If a father quarrels with his son, I mean, it can be settled. That’s what I was telling the President. Nnamdi Kanu is still your son, whether you like it or not.