The ThisDay Festival is back!!!
SOURCE
After all the drama and debate that last year’s inaugural event caused, Nduka and the ThisDay family are back with another stellar lineup.
Shakira, R&B rising star, John Legend and UB40, are among 12 Nigerian and international artistes who have confirmed participation at the second edition of THISDAY Music Festival scheduled to hold on July 14 and 15 at THISDAY’s brand new event centre in Lagos. The centre has a seating capacity of 15,000. More artistes billed to perform in the star-studded music festival are expected to confirm their participation next week. 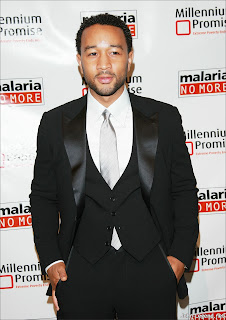 Tickets for the two-day event will go on sale at all branches of GTBank on June 14. The classic ticket will cost N10,000 per day, while the VIP ticket will go for N25,000 per day. Tickets for the exclusive but limited state box will go for N50,000 per day.
I am actually surprised by the ticket prices ‘cause I thought they would ‘give it to them’ by pricing VIP tickets at 500k or something. On a more serious note, it should be fun.

Banned Nigerian Actress, Ini Edo now dedicated to Charity
SOURCE
Recently banned screen goddess, Iniobong Edo seems to have taken her fate with all equanimity and opted for a new job as a humanitarian worker.
The Akwa-Ibom State born actress who has been in a sober mood since proscription by the Actors Guild a few weeks ago, recently visited three charity homes in Lagos as part of her contribution to the society that made her.
The ‘World Apart’ star spent the day with them giving them gift items worth half a million naira to appreciate God for what he has done for her. 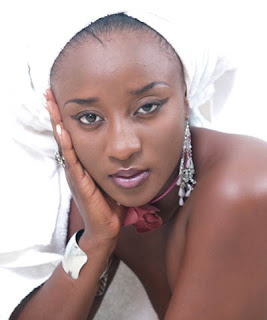 LOL…I think its a good move on her part! All the best to Ini! 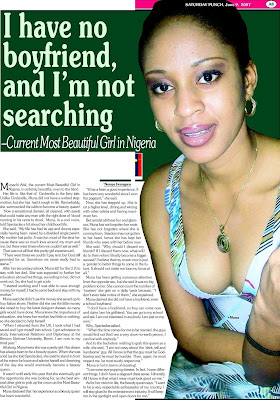 All the beauty queens always disclaim having a boyfriend, I wonder why….

On a more serious note, she was brought up by a single mother who was crippled by polio yet she persevered and is going very well for herself. So I am proud of her!

A reader named Toke (I am not sure if she wants her surname to be published) sent me this scan of the Editor’s note of the new edition of Genevieve Magazine, the editor’s note referred to an incident that occurred when shooting the cover of the March 2007 Edition of the magazine which featured HIV-Positive mother and activist, Yinka Jegede-Ekpe. Read the Editor’s Note below. 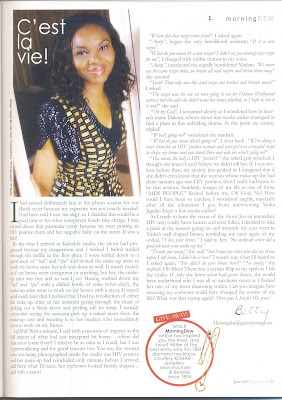 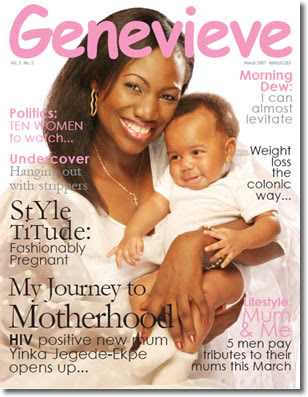 I love and respect Betty Irabor but the article left a bitter taste. I decided to give it some more thought before posting it on my site. During that time, I received an emailed apology from Betty which is posted below. I do not believe Betty intended any harm but incidences like this highlight the fact that we need to educate ourselves and get rid of the stigma attached to HIV positive people. We (Women and Men) also have to take proper steps when we go to the barbers, hair salons (you know those weave needles) and manicurists/pedicurists. That said, I believe we should not turn being careful into discrimination and paranoia. I respect the fact that Betty issued an apology.
Re: C’est la vie – An Apology
My attention has been drawn to the outrage my last MorningDew has evoked in my readers, and to say the least, I’m mortified. But like the title says, C’est la vie. That’s life. Let’s just say that it took our readers’ ire for me to see the specs in my eyes this time. I accept and I apologize. Let’s just say that my view has been misconstrued to mean that I’m being judgmental, but who am I to judge? I never meant it that way, and like I said, I am simply mortified. What I wrote in that piece was just a reflection, or should I say, an expression of how any average human being can feel given that circumstance. I was only trying to show how panicky and ignorant the best of us can be about HIV/AIDS. Perhaps it’s just the human side of me taking over. For over four years, Morning dew has inspired; it has taught and shaped people, and those are the things that I love to do and they have kept me going! Morning dew is where I keep it real and that’s what I’d hoped to do with Cest La Vie but it went very awry and I stepped on our readers’ sensitivity in a big way. If what I wrote to playfully caution people has come across so wrongly, I can only apologize.
I have also apologized to Yinka Ekpe herself and her husband, and they’ve taken it in good spirit and forgiven me. Maybe this is the time for me to crave your indulgence – all you readers out there. To err is human, and if after over four years of Morning Dew, you’re finding me guilty just this once, then I deserve the privilege of a pardon. PLEASE, it’s not in my character to hurt people.
Betty Irabor
Please share your thoughts and thanks for all the voice messages!
Thanks to Toke for highlighting this issue.
Take care…
Ciao!
Related Topics:
Up Next