You know those stories … about a talented person you know, who struggles and eventually makes it and you go, ‘I KNEW you were going to make it! (Eye roll! Yeah, right! lol) Well, this actually happened to me… for real, People!
I grew up in the same house with a dear cousin Duro ( I started living with his family when I lost my dad at age two). Duro was one of those people who from an early age, knew exactly what he was born to do … and that is to be a fashion designer. Not an anyhow type of designer mind you, but the type up there in the lights with Ralph Lauren, YSL, Dior, Lagerfeld etc. So, from the age of 10 (I kid you not!) he was consistently an avid collector of Vogue magazine, Cosmo, Tatler, Harpers Bazaar etc. Once his mum brought those magazines home, they disappeared into his room where he devoured the styles, lines and structure of the clothes!! He usually sketched his own adaptations on paper, exercise books and any blank space that had the misfortune of being on his path, much to the chagrin of all!
Fastforward to 30 plus years ahead… Duro is still sketching but this time to his tailors at his shop on Portobello Road, London! His first dress, called the Duro (naturally!) designed in 2005 was such a hit that it gained a reputation that spread across the fashion networks of two continents (Europe and America). Discovered by none other than Vogue editor, Sally Singer who just ‘happened to be in the neighbourhood’ and fall in love with his dress,(talk about being highly favoured) Duro launched his first self-titled women’s wear label in Spring/Summer 2005 to much acclaim and later that same year named was named New Designer of the Year at the British Fashion Awards that November. ‘The Duro’ was also named Dress of the Year by both British and American Vogue! Why am I not surprised? Today, Duro continues to blaze trails and wow women with his beautiful designs, having as his clients high profile people like Iman, Sally Singer of Vogue and yes, even Michelle Obama!
I duff my hat to him o! And I thank him for letting me know that with consistency, creativity, talent and perseverance, yes the DREAM can come true.
Click to see the most recent Duro Olowu Collection
Click to see style.com feature on Duro Olowu Dinner Event 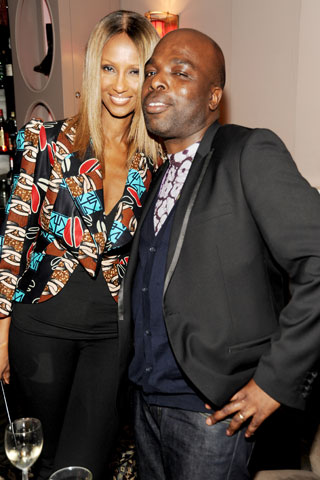