It’s Not a Man’s World 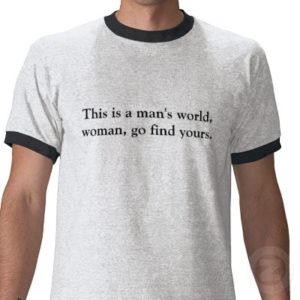 The other day I found myself watching the reality singing competition American Idol and the first performance of the day was by Michael Lynche who did a rehash of the James Brown song “It’s a Man’s Man’s World”. While I thought the performance was very good, I have to admit that I no longer share the belief that it is a “man’s world.”

I think this realization first came to me when I completed my youth service; however, the seeds of this notion had been planted way back in primary school as early as primary one!  Truth is society heavily aided by the media and the male ego has planted this lie into our subconscious; but perhaps a silent force behind this propaganda is the woman herself!

Allow me to illustrate very quickly.

In primary one, a few boys in my class refused to let the girls play in a particular section of the playground. The girls did not like this so off they went to the class teacher and spun a tale of how the boys threatened to and actually tried to beat them. Without hearing our side of the story, the (male) teacher proceeded to trash all the boys identified by the girls (O yes! I was caned as an innocent bystander as well). Talk about swift justice. Fast forward to primary five where I was the best pupil in my class. Then came this girl in primary six – my competition. She was better than me in Maths but weaker in English, so she would enlist my help (using her girlish charms) with her English assignments and class work; but I on the other hand was too proud to ask her for help with my Maths! The few times I did she would ignore me totally! Guess who became the best ‘boy’ in class?

Over the years, the male child has always been encouraged to excel at school, sports etc but the female child has had it a lot easier without some of the attendant pressure associated with their male counterparts. For some reason women are regarded as the weaker sex – not as smart or as strong as the man, so the man tends to treat her as such grossly underestimating her in the process. So it was always a pleasant surprise whenever a girl actually did well at school and sports. In Nigeria, the girl-child is believed to be at the short end of the stick when it comes to opportunities to go to school and complete their education. So the feminists and women groups cry foul and NGOs are set up and huge sums doled out to ensure that Chiamaka gets to go to secondary school and is allowed to pursue her dream of becoming a doctor. Very nice. But what about Emeka, who finds himself in the same situation? Who fights his cause? No one. After all, he is a man and can ‘take care’ of himself, abi?

When I completed my NYSC, the job hunt was on and I was on fire! Three months down the line, no job offer. The boys and I would meet at the end of a fruitless week to discuss our challenges, exchange ideas and revise our strategy – in short to lick our wounds. Then one of them pointed out that nearly all the girls he knew had all gotten jobs! I did a quick scan and discovered that all my female friends except one or two had gotten jobs. Even the girl I was dating during service year had gone on training with Virgin Nigeria! Another friend swore that he was discriminated against when a bank overlooked him in preference for two ladies despite his being better qualified. I asked him if they were fine and “yellow”, he nodded; case closed.

I mean the female prefere its everywhere. In traffic, God help you if you try to cut in a woman driver! And may God forgive you if you do not let her cut in when she wants to! A man drives badly he gets cursed out; a woman does the same and everyone lets her off saying, “Leave am o, na woman dey drive.” I am standing in a queue and a woman comes along and smiles at the attendant or cashier, next thing I know she has been attended to. I complain and someone behind me says “Ah! Leave am, na woman now!” I am trying to exit a close and some woman comes and blocks me despite the fact that I am almost out of the close. She stubbornly refuses to reverse to allow me pass by. I decide to be stubborn too and there is a standoff. Next thing I know every passerby concludes that I am an ogre because I did not give in to the ‘weaker sex’.

Permit me to be a bit crude, but I must speak! Even when it comes to the intimate actions of the bedroom women seem to hold the treasured right of passage. Men would never admit this but intimacy with any woman has the power to control them. When a woman tells a man, “I have a headache”, the world has seemingly come to an end. On the other hand, when there is a slight chance that he might get some, the man is ready to move mountains to ensure that he taps that. Men have borrowed their friends’ cars, stolen money, lied, fought their mothers and even killed because of women. I mean, forget all the political reasons but Helen of Troy was so HOT that a ten year war was fought because of her HOTness!

I once heard the story of a man who had two children in the university, a boy and a girl. They were both broke and they called their father separately to ask for some money. The man got angry saying that he had just sent them money and that he had no more for them. At the end of his tirade the girl quietly said, “No problem dad, I’ll get the money somehow. Bye.” The father asked her what she meant by that. She replied saying, “Don’t worry dad. You said you don’t have the money, I’ll get it from somewhere else.” Not wanting to know where that ‘somewhere else’ was the father credited her account the following day! What did the boy do? Go figure.

After years of believing that I am the man in any relationship, I finally got married to the love of my life and now my wife gives me permission to hang out with the boys. I have to treat her like an egg and put her first most times because if I do not my mother will get to hear; worse still, her mother and sister will get to know and then my goose is cooked!

The big irony in this is that womenfolk have over time succeeded in deceiving men that we are the ones in charge! They claim “weaker sex” when it suits them and scream “gender equality” when it is convenient. We poor men have been tricked for decades into believing we are in charge when really we might as well be puppets in this woman dominated world. Real power is not the one on obvious display, it belongs to those pair of hands pulling the strings in the background. Just ask Turai….sorry, I meant Lady Macbeth!

Mr. Nigeria Kenneth Okolie is the “3rd Most Desirable Man in the World”