It is Children’s Day 2012 and it must have been a long one by now. Perhaps, you have a magazine in your hand, you are distracted by some Governor talking on TV about the children being the future of the country; or it is even the President who opened the doors of Aso Rock for some of them to play with him. Yet, there are some children to whom May 27 has lost its significance. This piece is about such children, children who leave their homes for the streets to cater for themselves; children who are running from something or chasing something; children for whom something is “survival.” This is about restoration; about ex-street kids who now live in a home by Street Child Care Welfare Initiative (SCCWI), an NGO in Yaba. It is also about those who work day and night to ensure that these children have a future better than their past.

I see children on the street every day, begging, selling and making a living; but it is to Street Child Care and Welfare Initiative (SCCWI) that I go first. Located in the Alagomeji area of Yaba, it is easy to find. On getting in, I ask to see the President of the organisation with whom I have exchanged a couple of chats. She is not around, I am told. So, I decide to take a look around the home. Oyewale Oyeyemi, the in-house counsellor offers to take me on a tour of the home. As we walk, I ask questions.

How many children are here? Twenty four, he replies. This home is just for boys. The youngest is about eleven and the oldest is nineteen, in SS3.

We move through a long corridor. “These are their rooms,” he says.

The rooms have different tags bearing the names of different international football clubs on them: Manchester United, Chelsea, Barcelona. I do not enter. The boys are returning from school. Their arrival is greeted by a lot of “Good afternoon Sir.” Oyeyemi responds to their greetings, calling each by his name.

He shows me the library, with books on some book shelves and some space yearning to be filled. “So this is where the children read. “Interesting,” I say. We settle in the library for an interview.

Oyeyemi, a trained social worker, studied Social Development and Administration at the University of Lagos. “It is the first and oldest diploma in UNILAG, a medium of entering to study a degree called Social Work,” he said. He says that his work is challenging. “We deal a lot with dynamic people. We don’t show emotional attachment for the client because there could be burnout.” On his job, each day brings its own challenges, he even says that he does not specifically have a daily routine. “Every day we wake up; do our devotionals and get them ready for school. We have office work; but everything that comes after that you cannot predict.”

I want to know how the boys adapt to their new environment, how they cope with a routine and being catered for. Oyeyemi says this depends also on their age when they come into the home. “Some of them in their early teens, it takes a while for them to get used to the new environment. When they come to a structured environment, it scares them. Some of them don’t like the structure. Outside there, they do what they want but here there are measures. We keep a close eye on them.”

We all have our habits however I was wondering if there are any habits that the boys bring from the streets. Oyeyemi says that he is always on the lookout for drugs. He said that in another home where he worked there was a case of homosexuality, one boy trying to force himself on another. “Here, everybody is straight.” No pun intended, I add. 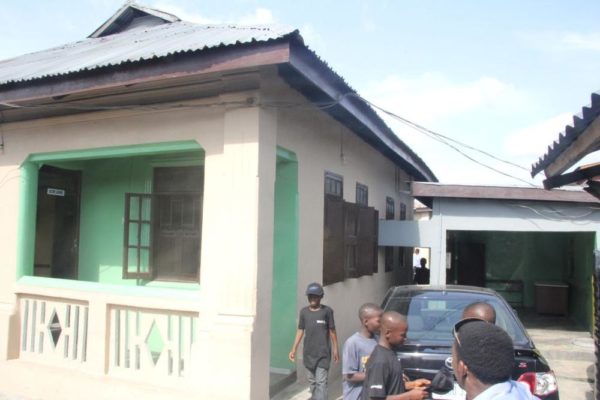 I wonder how kids end up in the streets, first; and now in the home. “Some are beyond parental control. Some are violent. Some of them, their parents bring them. Some left because of absentee parents.” He says. Then, he gives me some statistics from his observation. “80% are from the street; 15% beyond parental control and maybe the remaining five % as a result of absentee parents. That’s the trend that I’ve been able to recognize. Parents leave home, go to work; they don’t see the child in the morning and at night. Many times the child leaves home and goes into the streets.”

Oyeyemi, is from a broken home. He tells me his own story, of how he ended up in the streets. He was ten, the first time he left home. “My Dad was a trade unionist, he always travelled. I was there with my siblings who were lots older while I was in about primary school. I formed a personality trait; playing with things around me; finding myself in environments I shouldn’t be. I started leaving school, playing truancy. They will think that I was in school, leaving with my school bag.”

Why would a boy of ten leave his familiar world for the strange? “It has to do with when you don’t have any emotional fulfilment. Nobody knew. It took the intervention of my Mum who went to school, only to find out that I’d been missing classes. Those are issues that crop up and you find your child on the streets. There is no emotional cushioning. No one to feel an emotional attachment to. He starts withdrawing from them.” In his late teens, he left the streets; went back to school, though he was already late compared with his mates.

As we speak, a boy comes in to take permission to go and buy food. Oyeyemi narrates to me what transpired earlier in the day, how the boy had an issue with the cook. “His manner of reply was wrong. That’s what I tell them there are things you do and people won’t like. The cook is like your mother here. The way you behave to her is the way she will treat you.” He reprimands the boy, in Yoruba before granting his permission.

SCCWI ensures that the children get an education. “We get them through school or a vocation. After that, they go home. We reconnect them to their parents. That’s the focus of the job. Majority of them we have contact with their parents. We bridge that gap that has existed for years.” He says that he has seen some of the reunions. “At times, it is emotional,” he says.

As we round off, Alli Comfort, the President of the organisation walks in. She is ready for my interview. She tells me about the background of the organisation. SCCWI started as a way of giving back by two French people. “The founder is Paturelle, who had business in Nigeria wanted to do something different from the orphanage kind of thing that we have in Nigeria. Then, he met Perinne, a social worker already working in Kuramo. Both of them got together.” She narrates. The rest is history as SCCWI started in August 2007. In 2008, the first set of children, eleven of them came into the home.

Alli is passionate about job. You see it on her face; in her hands, as she gesticulates; you hear it in her voice, each word oozing her passion for “her boys.” She says that she receives a lot of support from family “My boys is something they hear in my house. They are used to the boys in my house. My parents come to visit; the boys go to visit my parents. My parents like what I do. My Dad is not surprised.” She has always loved children; she tells me that her blackboard was only disposed when she was in the university because she was always teaching children. “I love having children around me.”

The job was challenging at the beginning. “I was dealing with boys, many of them who think that they have been failed by their family, friends; many angry. They just want to do anything to make a living for themselves.” She says many of the boys come from different parts of the country “Many come from rural areas; they feel that Lagos is the haven for quick money, that Lagos is a greener pasture and they come here and see that it is the survival of the fittest.” She tells me that some boys come to Lagos; experience it and then go and get more boys. “They see that they can actually make some cool money, then they go back home, recruit some more boys and then, they come to Lagos.” 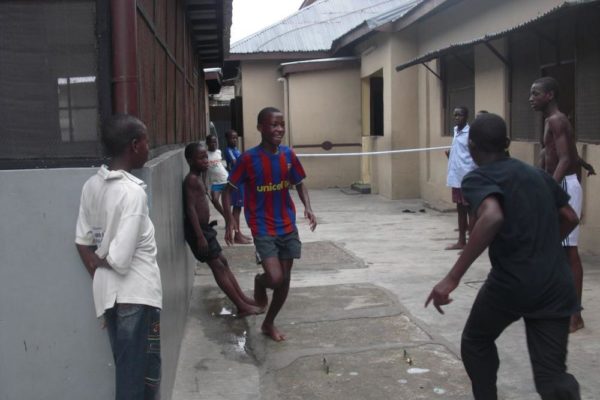 The reason why many children are on the streets can be traced to the families. “Many leave because a home is not really a home. If you have a home that there is love, affection and care, you won’t want to leave that home, no matter how attractive Lagos is. When there is a disconnect, as a matter of fact many of the children have family disconnect.” Children are even more observant than parents know, she says. “The child sees it even before Daddy starts beating Mummy. If the child sees, that they begin to withdraw, disconnect from the family and then run away from home.” Many children withdraw into themselves as a way of protecting from hurt in the home. She tells of a friend who took her child to a psychologist because the child was acting strangely.

For other children, it is a matter of economics. “Some feel that their parents are not taking care of them. Some feel that they are not going to school so there is no future for them, so let’s see if there is any life out there. Some feel that there are too many children so how are my parents going to cope. Some actually have aged parents who cannot take care of them,” she tells me. She says that according to research the main factors that push children to the streets; are neglect, poverty and broken homes.”

Alli says that being on the street exposes children to hazards like social ills “They know more than you think they know. They know more than you can ever begin to imagine. Some pedophiles, terrible rich guys go into the streets to pick them up, to sodomise them and pay them peanuts. That’s the fastest way of spreading HIV.” One positive thing that they learn from the streets is team bonding; this is also questionable in a way says Alli “In their own case, they channel it into doing the wrong things together. It’s always about that they did something bad together.”

Alli knows this; as a child, she was on the streets for survival, to make ends meet. Her parents insisted on giving her quality education though her father’s meagre salary as a soldier could do little; so, she offered to sell everything she could lay her hands on to make ends meet. She narrates “I lived “off the streets.” I sold everything; seasonal fruits, groundnuts, okrika, shoes; and then went back home. I saw it like this; my dad paid my school fees, my Mum paid my transport fare and bought provisions yet there were some things I needed. My parents were helpless about the situation. The good thing is my parents stuck together.”

To be continued tomorrow.