Fresh facts have emerged from the investigation of a Nigerian minicab driver, Ovo Mayomi (44) and his wife Juliet Ubiribo (32) involved in fraud and immigration scam in the UK has been uncovered.

Mr. Mayomi who claimed he was earning just £700 monthly and his wife, Juliet, were convicted of fraud in 2010 after using an identity and immigration scam to falsely claim £43,000 in benefits. Juliet claimed benefits after telling benefit bosses she was a single mother and a victim of domestic violence. They lived in Croydon, South London.

After their crime was discovered, their assets were frozen, and an investigation into the amount they gained from their crimes was launched.

Croydon Council discovered that Mayomi, who received a 30 month sentence two years ago, owned a luxurious home worth more than £1m in Nigeria, complete with chandeliers, £89,000 worth of sound equipment and a £25,000 watch. His wife wore a Rolex watch and drove a Mercedes Sport Coupe.

According to a report by Daily Mail, his wife, Juliet had claimed to be a single parent claiming housing and council tax benefits.

She then asked the council to rehome her to escape domestic violence, but the number given for her landlord was in fact that of Mayomi, under a false name.

At a police interview, Mayomi admitted he bought the identity of Ayiomike Matthew Neburagho and had entered the UK as him. Mayomi was also shown a wedding photograph of himself, using the Neburagho identity, marrying a Nigerian woman in the UK. He admitted he was the groom in the wedding photo but he said he was “just standing in for someone”.

Juliet and Mayomi pleaded guilty to all charges.

Their scam was unravelled when a visa application by Mayomi showed they had married a year earlier and that Juliet had a job in order to support him.

Their action has caused an outrage from some UK residents who say that the couple are part of those draining the housing and benefit system funded by taxpayers money.

Here are pictures of their mansion in Lekki, Lagos state discovered by the fraud investigators: 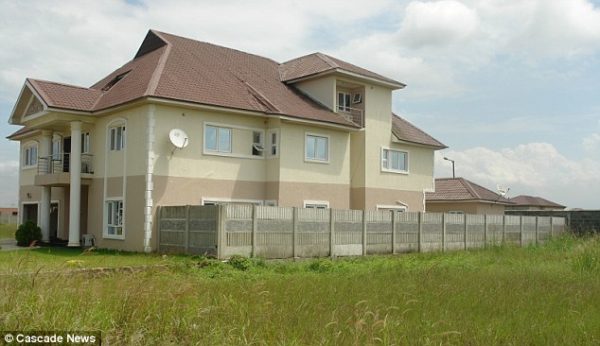