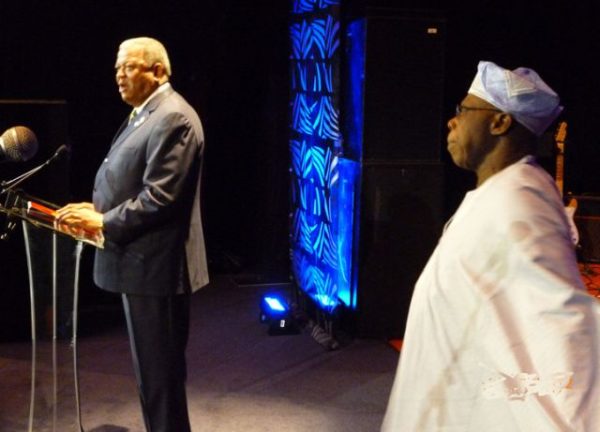 Although his tenure as President of Nigeria has long been over, Olusegun Obasanjo seems to be getting more and more international recognition.

In June, the former President was appointed an adviser to New World Oil and Gas plc, an AIM-listed investment company focused on investing in and operating oil and gas assets {click here to read the report}.

Now, just a few months later, he has gotten another international recognition, this time from the United Nations.

On Sunday, in New York, the UN conferred on him the South-South Awards for Global Leadership.

The ceremony was part of the 2nd Annual South-South Awards which took place at the Waldorf Astoria Hotel during the High-Level Segment of the 67th Session of the UN General Assembly.

According to NAN, the 2012 South-South Award recognises, shares and disseminates the most outstanding success stories and lessons learned in South-South and triangular cooperation in using ICT for development.

The selection process for the Awards is led by an internationally recognised jury, and the Awards are organised in close cooperation with several international organisations under the patronage of the International Telecommunication Union (ITU) and the United Nations World Trade Organisation (WTO).

The criteria for the nomination and selection of Award winners focus on achievements and initiatives, which represent outstanding contributions and advances in the use of ICT and media in advancing the MDGs.

The Awardees include government leaders, business, ICT innovators and practitioners, and youth leaders.

Taxi Driver who Returned N18million Forgotten in his Cab in 2007 gets N2.5million Reward from SEC