"He was a very gentle person" Parents of Lt. Adeyemi Sowole, Co-Pilot of the Crashed Naval Helicopter recount their Last Moments with their Son 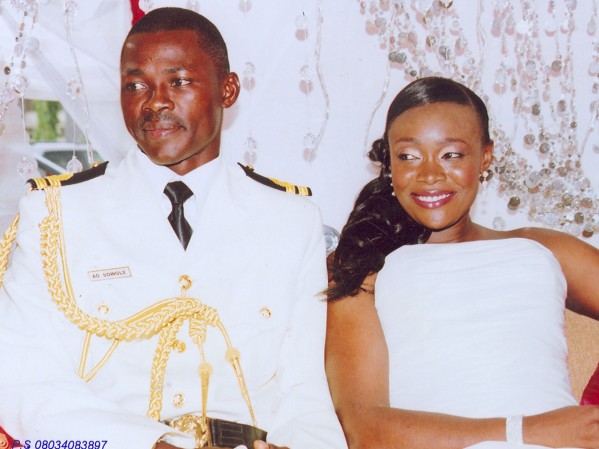 He was aged 32, got married on March 26th 2011 to his wife, Eniola and had his first daughter, Teniola barely nine months ago. He was the bread winner of his family and his parents are still alive. That is the sad story of Lt. David Adeyemi Sowole, the co-pilot of the ill-fated Navy helicopter that crashed on Saturday in Bayelsa state.

At his home in Iyana-Ipaja, Lagos, The Nation captured the gloomy mood of his parents as they mourned their son.

He described his late son as “a very gentle, honest, humble, trustworthy and highly disciplined person, who does not want people to deceive other people. He was a man who believed in sincerity to all and malice to none.”

He said he last spoke with his son on Friday, when he called from Warri, Delta State, where he went on a relief duty for three weeks. He said he had instructions to stay back in Warri because he would be involved in a special assignment.

Sowole said he discussed with his son about his job. “I asked him about his job and he told me it was okay. He asked after everybody, his brothers, his sisters, his mother and every other member of the family. “

His Mum, Olufunke Sowole, while recounting her last conversation with her son said he was initially due to be back in Lagos on Saturday, the day he flew in the crashed helicopter. She added that he called her when he was about to board the chopper at Okoroba for Port Harcourt that fateful Saturday and assured her that he would be back soon. She said she discussed with her son for about 20 minutes on the telephone and that there was no sign that something would go wrong.

According to his father, the family became apprehensive when they heard the news on the radio on Saturday that there was a helicopter crash somewhere in Bayelsa State.

“We called all his mobile phone numbers, but we couldn’t make any contact with him. When I visited his mother in the hospital, I couldn’t tell her anything because of the state of her health. While we were listening to the news on the television that night, a boy came from Warri to Lagos and called his younger brother, Owolabi. I found the call rather unusual and concluded that something must have happened.”

From the account of his parents, he was a man who was well loved by his family. He left behind a little daughter and his wife. They must be going through a difficult period now and we express our deepest condolences to his family. May God grant them the fortitude to bear the loss.