“Can You Marry A Person Like Me?” | Beverly "Informally Proposes" to Angelo in the "Big Brother Africa - The Chase" House 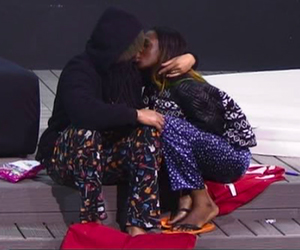 The numbers are dwindling in the “Big Brother Africa – The Chase” and there are only nine housemates are left – Melvin, Beverly, Angelo, Feza, O’Neal, Bimp, Cleo, Elikem and Dillish. It’s no surprise that the housemates have all paired themselves up but there’s one particular relationship that seems like the real deal – Beverly and Angelo.

Last night, the housemates got a little bit bored and ‘lonely’ so they decided to turn it up a notch by playing some very fun alcohol-inspired games. The result – housemates stripping off their clothes, playing ‘hide & seek’ and having a lot of fun. Who ever knew you could get alcohol involved in ‘hide and seek’?

But, when the fun and games were over, it was time for some sober reflection for this couple in question. Beverly and Angelo went outside for some alone time and from almost arguing about ‘kissing a smoker’, they started discussing how their relationship would survive outside of Big Brother. Here’s how their conversation went.

Beverly said that Angelo terrifies her because she’s fallen in love with him so fast. “I try to deny that I love you because I’m thinking it’s too early to love you when I don’t know how you are in the outside world,” she said concerned.

Angelo understood where she was coming from but also had the same fears as Beverly did. “To be honest, I’m also kind of scared of knowing you on the outside,” he told her. But Beverly quickly defended herself saying she has told him everything about her and whatever he hears on the outside should not matter.

She then asked him a question he was all too happy to answer. “Can you marry a person like me?” she asked almost shy. Angelo didn’t hesitate to answer. “Yes, but would you marry someone like me?” he asked as well. She agreed saying that she would have no choice because she loves him.

Will we be hearing wedding bells soon?