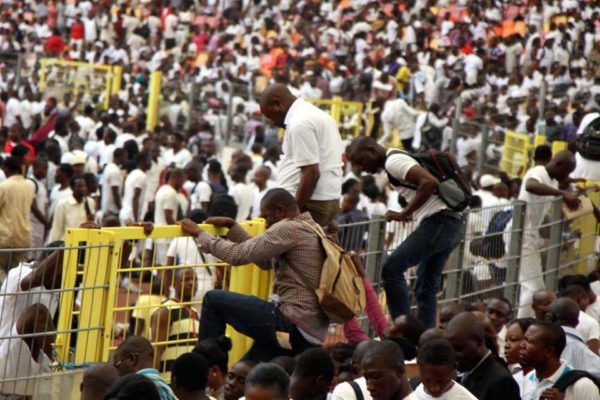 “About half-dozen people dead, many critically injured.”
That summarizes the Nigerian Immigration Service’s recruitment event at the National Stadium, Abuja earlier this Month. But that’s old news, right? We have new massacres from the Northern Region to titillate our fancies and provide meat for our social media conversations.
What remains is the recrimination, the blames – that spurred myths which are wrong, unhelpful, and even distasteful.

The most popular myths are these:

The Victims Are at Fault For Being Unruly
This is a very popular sentiment, one that even an insensitive government minister had the idiocy quotient to spew out. What could be wrong with this: if those stubborn applicants had behaved in neat and proper fashion, the stampede that led to the deaths would not have happened. Very simple logic; except it’s as logical as saying “if only a mango had many small seeds in it, it would taste like an Orange.” These applicants are not foreigners or aliens from heaven- they are our brothers and sisters, people who know how to run after a danfo while elbowing out others to get a cheap fare to their destinations, they are the ones who ignore queues at banks and ATMs. We grow up in a culture that ridicules order and dismisses anyone who attempts to follow rules as a fool who wants to be cheated out of his/her due. We denigrate the gentleman, scorn the civilized woman, and press our grievances with violence – our youth have grown up in such a dysfunctional culture, do we then expect them to understand the profit of orderliness?

To complicate matters, less than 5000 positions were advertised while millions of young people applied; immigration officers of various ranks were running scams to benefit those who are connected or those who could pay: playing nice and law-abiding would cost you a golden chance. Would you too, in their shoes, not try to enter the mainbowl to make a chance for yourself – to meet and pay officers who can connect you to the job?

A broken system like ours demands the combative and the rules-disregarding to step up to be rewarded – and the Immigration Service is a typically broken Nigerian institution; a cursory browse through their Facebook page will reveal how ludicrously messed-up they are – self-described immigration officers advertising their employment scams even as many applicants laid dead in the morgue, status updates showing aching mediocrity as simple English sentences could not be composed correctly!

The recruitment efforts of the NIS were so incompetent that even being aware of the population of applicants coming (hence the use of the National Stadium), they could not be bothered to prune down the number of applicants through online-tests (as done by modern organizations) to a manageable size, before a face-to-face assessment. It is probably part of their inability to think outside an outmoded sense and determination not to have a meritocratic recruitment process that ensured they did not see the options available. To top it off, they refused to utilize crowd-control measures that would put some order in the process; instead they used police officers who are untrained in crowd management and would, at the first sign of disorder, start firing (as some reports confirmed) and worsen an easily corrected situation.

They Were Not Forced To Attend – It Was Voluntary
This perception goes something like this: Those applicants were adults, who understood that they had responsibility for their actions and voluntarily entered the stadium. This would make some kind of weak, perverted sense if they were attending a music concert by some overcompensated Pop star. They weren’t, they applied for a job, and expected, while applying, that such recruitment would be conducted in a fashion that their lives wouldn’t be at risk – for crying out loud, they were not auditioning for an episode of a “Who wants to die” show!

Even risky adventure shows like “Gulder Ultimate Search” where physical risk is clearly implied go to great lengths to ensure the contestants are safe and return whole to their loved ones. The applicants would expect that the Immigration Service would pick safe processes and venues for the recruitment exercise – preferably an air-conditioned Interview room in the Service’s Abuja HQ.
But at the end of the day, attending the assessment was voluntary, right?

No! Voluntary suggests you have the choice not to attend and have no adverse effect. But in a nation where 60% live below the poverty line and the young people below the age of 40 make up more than 70% of its population, with a sizable number being officially unemployed, missing a job opportunity is not voluntary, it is a mega-catastrophe. Compound this with the fact that while many graduates with good grades (1st class, distinction etc.) are unemployed, the many without such grades are disqualified from most jobs, so when a job opportunity without such a precondition and job-security arrives, the rush for it would be maddening.
Adding a third layer, the jobs being contested are not just good jobs in the Nigerian context– they are excellent jobs. A job in Nigeria that gives you a uniform and some form of paramilitary training is highly coveted in a society where might is right. Since immigration officers have their posts in airports, seaports, borders where the chance of making money through very corrupt but societally-accepted means to supplement your meagre official pay is extraordinarily high. Pragmatic young Nigerians know these truths, they see the benefit of corruption around them and the impermanence of a conviction (a la Alameseigha), and they know getting into that service is the closest equivalent in Nigeria to winning a lottery jackpot without being politically affiliated. Who would consider this chance, in all good faith, voluntary?!
The alternative is a low-paying, menial and esteem-ruining job that would see your loved ones suffer and wait vainly to reap the fruits of their efforts on you in this country where social mobility is impossible without corruptly gaming the system.

Start A Business Instead of Searching For a White Collar Job
Yes, yes…start a business. These lazy, unimaginative youths who cannot conceive a lucrative idea and turn it into a profitable business. True, our youth must become entrepreneurial, build the next Facebook and stuff, but wait, are we not talking about Nigeria?
Not that Nigeria cannot create the next big thing, the potential is there– just not the way it is now. It’s too sick to do anything useful; it cannot even fight for its own life, as Boko Haram keeps confirming.

The way Nigeria is now, means that its educational system which is a stifling piece of archaic, rote-learning scam is oppositional to creative entrepreneurship. Killing individuality is a teaching principle, just like the smothering of spontaneous brilliance and innate genius. The school system is not made to cater to the best of our abilities-the curricular is very limited than it ever was and is getting even thinner; young people are being herded to get certificates, not to develop the magnificent potential in them into greatness. The occasional science fair is to fleetingly tease our imaginations and whatever sharp ideas are shown by the students is discarded immediately after.
The tertiary system is a sad caricature of what can be – scores are, at best, earned by memorizing recycled lecture notes, as opposed to critical, lateral, original thinking. Now, I could go on listing the ills but we all know them, we know only few survive that experience completely: it’s like soldiers who return from war with PTSD. The absolute majority of these mentally-scarred youths cannot build businesses, especially in the business-suffocating climate of our dear nation.

If you disagree, try opening a business. Deal with the cost of energy, and of transportation, multiple government taxes (you’ve paid your state land-use charge, but there is a forgotten, buried tax called tenement rate revived by unscrupulous local government staff for your special pleasure, now pay that!), the logistics (do you think the traffic jams are harmless distractions?), the dearth of qualified, responsible personnel (your accounting may never balance if you try delegating anything serious or money-involving), the opposition to innovation (if you try to bring in an innovative style of business to something old, your competitors will accuse you of ‘spoiling market for them’ and try their hardest to sabotage you, including using the pay-per-use police force – emphasis on force), and if you are lucky enough to locate the business in a market/mall, well, the unions would force you to either join or close up shop. Contracts are make-believe nonsense that you have no resources to enforce (care to spend N1 million and five years of your life on a N100, 000 24hrs-valid contract in our overburdened courts?).
The whole affair is sad and tragic, not just the NIS recruitment (which is worse than tragic), but the country we are bequeathing our young ones.

Blaming them for the descript-ness we have forced them into is just low, and poorly thought.

Say Cheese! Smile Your Way to An Amazing Makeover with the 2014 Project Smile Competition