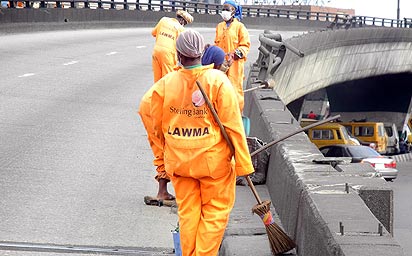 A pregnant LAWMA (Lagos State Waste Management Authority) employee was hit by a petrol tanker vehicle yesterday while she was sweeping the streets.

The accident occurred at an Ojota, Lagos road while the woman, Kikelomo Bamidele, was sweeping the inside roads of the BRT lane near the pedestrian bridge, PM News reports.

“The tanker driver had break failure and was trying to manoeuvre the vehicle when he veered into the BRT Lane where he crushed the sweeper. The sweeper’s leg was totally crushed and she lost a lot of blood,” said a witness.

The driver reportedly tried to flee, but was however apprehended by LASTMA staff, who handed him over to the police.

Bamidele was rushed to the Lagos State Emergency Centre at the old toll gate of the Lagos-Ibadan expressway. Unfortunately, they were unable to save her life.