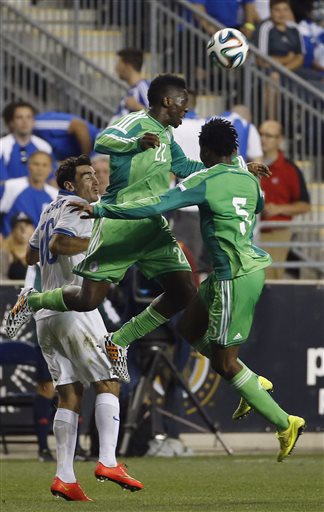 CHESTER, Pa. (AP) — Greece and Nigeria played a scoreless draw in a pre-World Cup friendly Tuesday night at the home of the MLS Philadelphia Union.

There were few scoring chances in one of the final tuneups for the 2014 World Cup in Brazil, which begins June 12. The best opportunity came for Greece in the 83rd minute when Giorgios Samaras had a shot blocked from 10 yards and Dimitris Salpingidis followed with a header that missed.

Nigeria countered in the 87th minute when Ogenyi Onazi fired a shot from 25 yards that was saved by goalkeeper Stefanos Kapino.

Greece midfielder Giorgos Karagounis, its 37-year-old captain, played the entire first half, much to the delight of the large contingent of Greek fans in the stadium donning his No. 10 jersey.

“I think we managed to give the Greek people pleasure to see the Greek national team prepare for Brazil,” Greece coach Fernando Santos said. “It’s why we made these tests. It was difficult for us because we had a very long trip from Portugal. We were jet-lagged. It was a little bit difficult for us today.”

For Greece, it was the second of three exhibition games over a six-day span, so a number of starters were given extra rest. The series of games started with a scoreless draw against Portugal on Saturday, and will end Friday against Bolivia at Harrison, New Jersey.

“I think we played better today,” Santos said, referring to the last two games. “This is part of the progression we want to see from all the players.”

“We were not able to keep our ball possession like we did for the last 12 to 15 minutes,” Nigeria coach Stephen Keshi said. “We’ll see how it goes in the next game.”

The next friendly for Nigeria will come against the United States on Saturday in Jacksonville, Florida.