Adedotun Eyinade: Conquering Kilimanjaro for the Worthy Cause of Down Syndrome 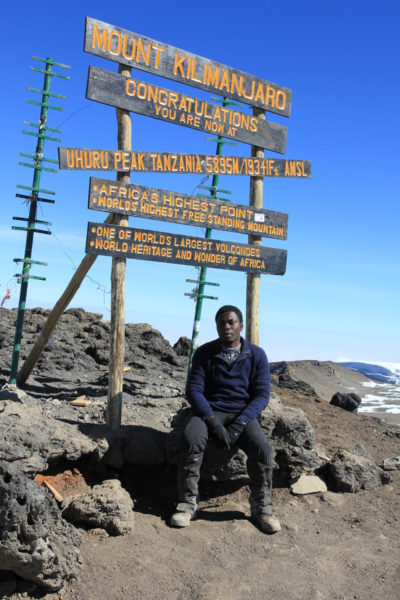 It is some minutes before midnight and we are just half an hour shy of kicking off our summit hike. I am at the Barafu camp (Base camp) of Mount Kilimanjaro some 4673 metres above sea level and telling signs of the stress of high alttitude are already evident: head throbbing from an intense headache, nose dripping with snot. If the aphorism that the morning tells the day is anything to go by, then my hopes of a hitch-free summit are facing grave threat.

For the climax of a 6-day charity climb to raise funds for the Down Syndrome Foundation Nigeria (DSFN), I am not in best of shape, but I will proceed nonetheless. After munching a piece of cookies and downing 2 cups of tea (our appetite went south as we gained altitude), I did a last minute check of our gears and surveyed the small party- everyone is sober, a marked constrast from the exuberant energy in display three nights before.

I catch a glimpse of anxiety on the face of Paul, the Irish dental student who joined the trio of myself, Thierry Mbimi, a Cameroonian and director at KPMG Lagos and Umar Farouk Umar, a United Kingdom based software engineer. Tuma, our chief guide, a well-built, soft spoken Tanzanian who cannot count the number of times he has been up Kilimanjaro, checks our boots, gloves, water bottles and head lamps to be sure we were ready for the long night. I call for a brief prayer, as we could use some divine help. I pray in English and Umar pray in Arabic and we set out for what will be the most physical and mentally exacting hike of our lives. 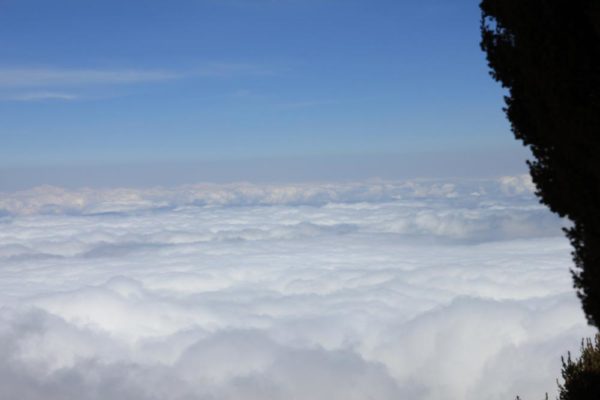 It was in August – the ninth and last month of my fellowship year as an Acumen Fellow in Tanzania – that I scheduled the 6-day hike to Mt. Kilimanjaro to raise awareness about Down Syndrome in Nigeria and also raise funds for Down Syndrome Foundation Nigeria (DSFN). DSFN is the foremost organization providing care and succor to persons living with Down Syndrome. I had always wanted to climb Mt Kilimanjaro, and undertaking it spoke to a resolve to use my fellowship year to explore sublime themes like meaning and purpose. An otherwise mundane adventure like a 6-day mountain hike felt like a good place to wind down the interrogation.

I have my friend, Ify Ogo to thank for being a critical sounding board and a worthy partner. Thankfully, I was also rewarded with enthusiastic friends, acquaintances and erstwhile strangers who were a great resource in ensuring that Climb for Down Syndrome (#Climb4DS) left the ranks of my many unaccomplished dreams into reality. From an envisaged team of 10, we whittled down the team to 6 and curiously only 3 hikers eventually set out from Machame gate that fateful Monday afternoon for the 6-day hike. 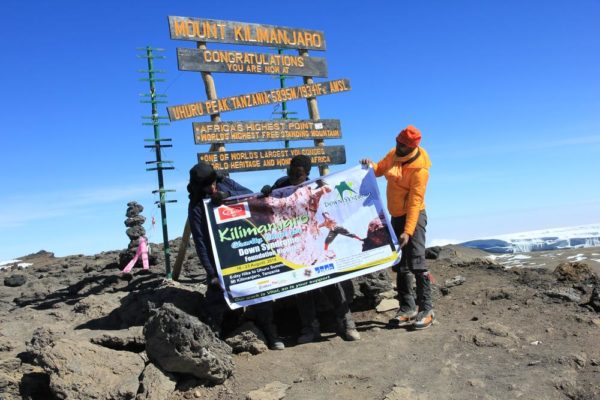 One prospect called in 2 days before the commencement to say his doctor dissuaded him on account of his high blood pressure; another friend had a clashing meeting outside Nigeria and pleaded that we changed the date. A significant discount in air ticket fare we were expecting from two airlines turned out to be a paltry single digit haircut in the fare. When it rains, it pours.

It wasn’t all gloomy. We managed to get Michael Olorunniwo, a member of Inspired by Charity, (the social enterprise we put together to organize the charity climb) and Amaka Obidi, ( an official of Down Syndrome Foundation Nigeria) to talk about DS, the climb and how the public can donate to the cause, on primetime TV. It was a great booster for our morale, watching the 30 minutes interview online from our hotel rooms in Arusha, the day before the climb.

The first day of the hike felt like child’s play: a leisurely 3 hour-walk from Machame gate (1640metres ASL) to the Machame camp (2,850). Hiking with hundreds of people from all parts of the world- desirous of summiting the only mountain of the seven summits that you don’t need mountaineering gears to summit – helped in bolstering our morale. The only noticeable discomfort that night was stealing out of my sleeping bag and tent to take a leak in the freezing cold. After two visits, I flirted with the idea of taking a bottle inside my tent to empty my bladder. It didn’t help that we were advised to drink about 4 litres of water daily to mitigate the effect of altitude sickness, the dreamer crusher of many a Kilimanjaro dream. 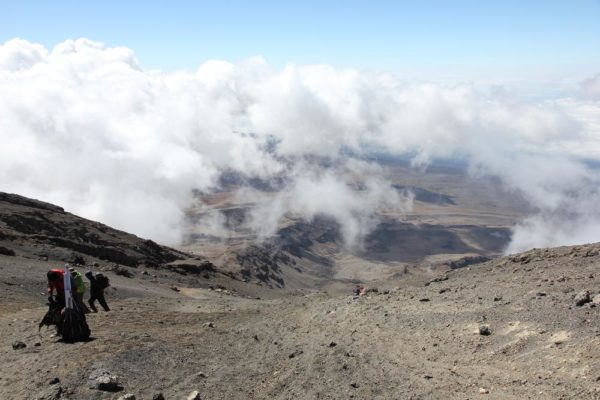 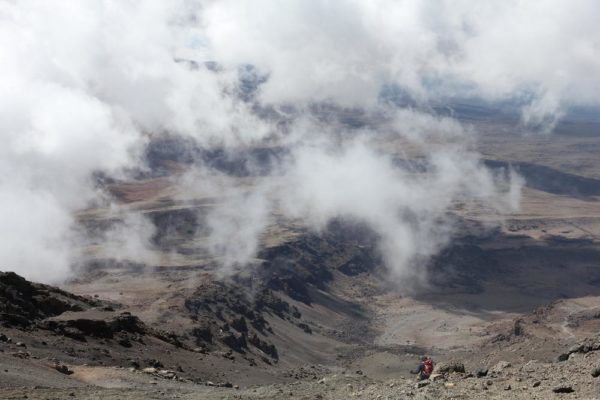 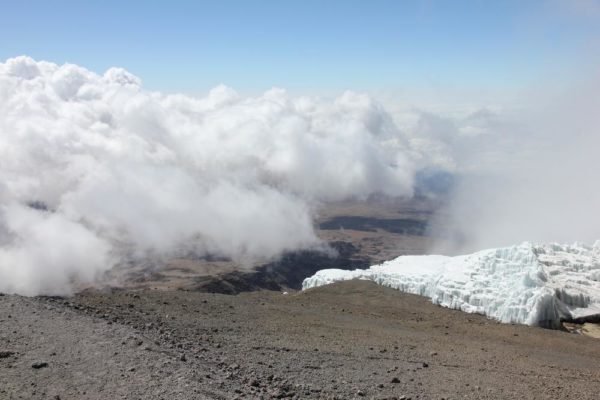 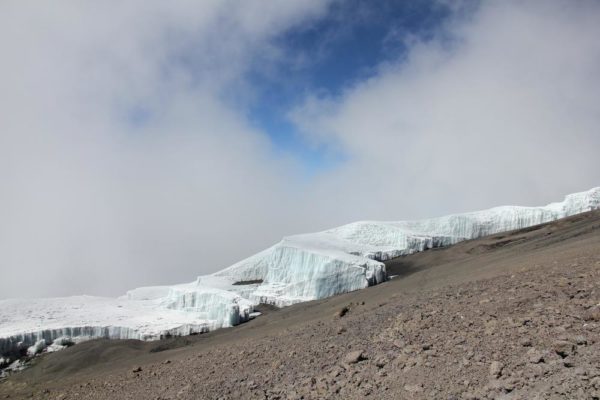 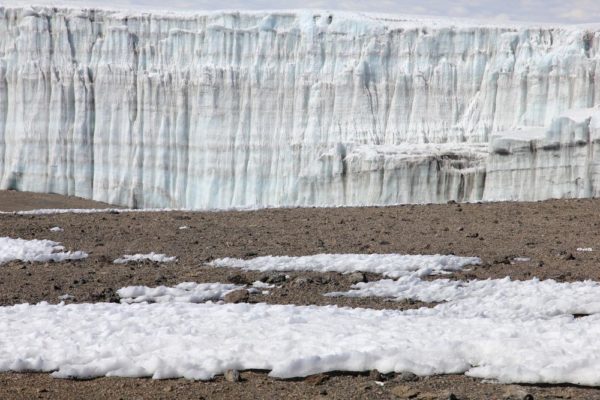 The exhilarating feeling of being above the clouds replaced whatever fatigue we felt on the second day as we moved across different ecological zones. Machame route, one of the seven routes on Mt Kilimanjaro, despite being very difficult, rewards its hikers the most scenic view of Africa’s highest mountain. While we hiked with our light backpacks pole pole, (slowly slowly, in Kiswahili, as the guides are wont to say) I felt guilty watching porters, clad in weather beaten shoes and well-worn clothes, laden with over 20kg of various paraphernalia of camping, sped past us to set up tents at our next camp stop. These men and yes, women are the true heroes of mount Kilimanjaro. You can only best their speed when they settle down to take a gulp of water, a stick of cigarette or the ubiquitous Kilimanjaro Diamox, metaphor for marijuana.

The second and third day passed on uneventfully. The fourth day came upon us with great expectation. The hike from Barranco camp (3,976metres) through Barranco wall was the most frightful. Scrambling past hair-raising cliffs, I recalled voicing my fears of fatal falls and this paid off as I got a helping from the chief guide. I looked back with relief when we exited the treacherous wall of Barranco. We thereafter hiked to Karanga camp (3,995 metres) before we proceeded on a 6-hour draining hike to Barafu camp, the base camp. 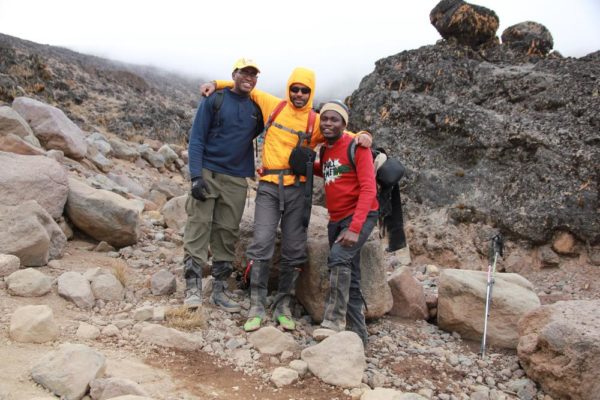 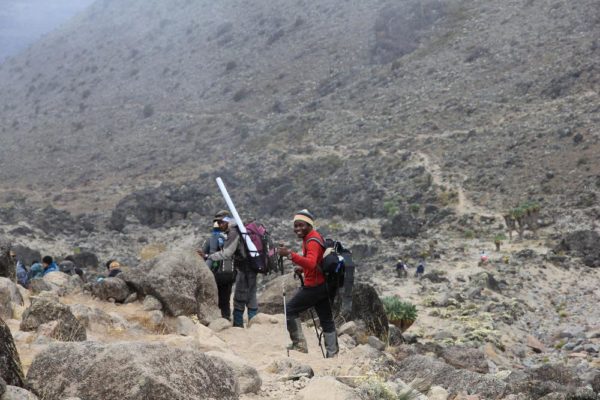 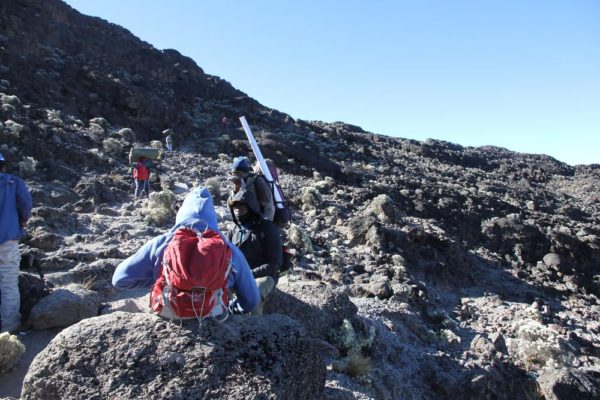 I began to harbour deep fears about my chances of successfully summiting Mt. Kilimanjaro before reaching the base camp. I was lagging and became the fodder for the pep talks and recipient of several water bottles and energy bars to provide strength for the final laps to the base camp. After a light dinner at the base camp, I struggled to sleep for 4 hours. 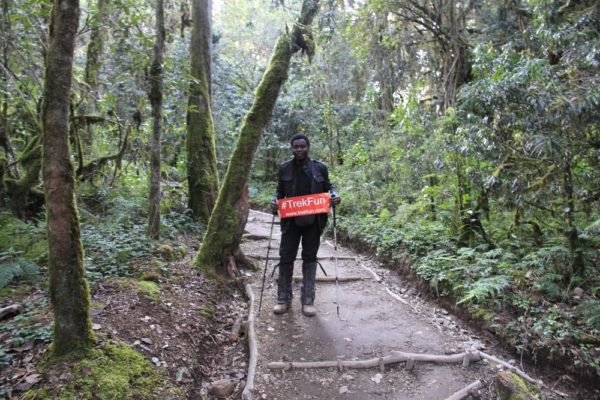 Two hours into the summit climb, I began to cough and to feel dizzy. By this time, I had caused the party to stop about three times to attend to me. After drinking water for the umpteenth time, Tuma, asked Thierry, Umar and Paul to proceed with the assistant guide and some porters, leaving myself, a porter who carried my backpack and to trail behind. In the freezing cold, I questioned my sanity for thinking up a risky adventure like Kilimanjaro in the first place. By the third hour, Tuma suggested that we call off the hike and return to the base camp since I was already spent. I had lost count of the spoonful of glucose I had downed at this time and yet there was no end in sight. I would look ahead to a long column of headlights ahead, signifying scores of hikers on the long trail to the summit. When will this self-inflicted ordeal end? I asked myself. Then, I started to hallucinate. 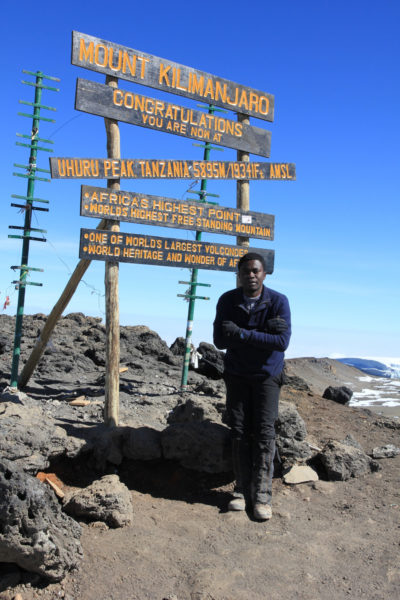 It was in this delirious state that the sun commenced it rise. I was completely shattered when I realized that after about 6 hours of hiking, we still hadn’t gotten to the summit. I keeled over and asked to be left to sleep. At this time, a few folks who had reached the summit and were on their way back to the base camp offered some words of consolation. One notably advised that I returned to the base camp since I was already in the bad shape. “You can give it a shot next time”, he counselled. How I shrugged off all the pleas of my inner demons, the guide and sauntered first to the Stella Point (5300 AMSL) and finally to the Uhuru summit (5895 AMSL) still remain a mystery to me. My team members had given up on me had taken pictures with all the summit banners by the time 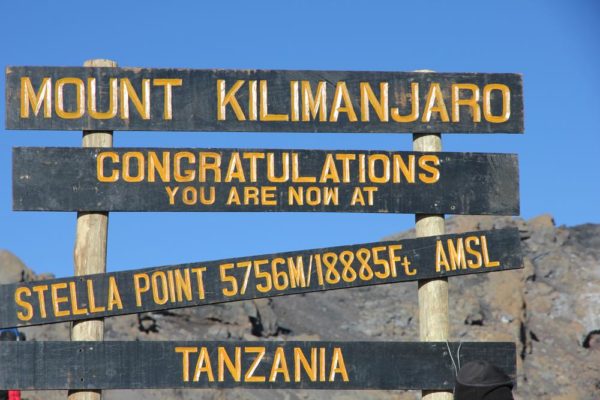 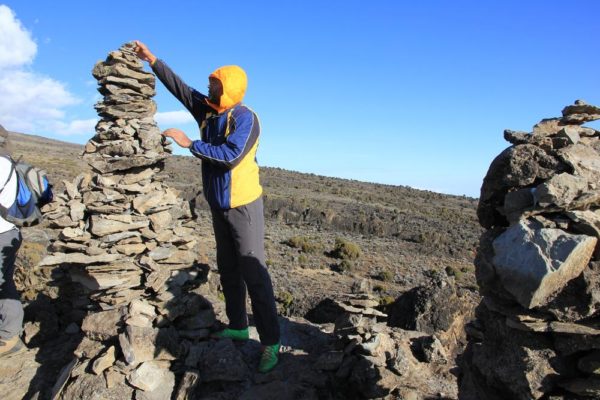 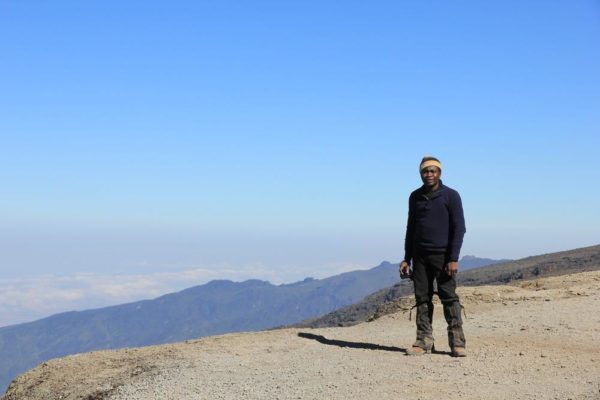 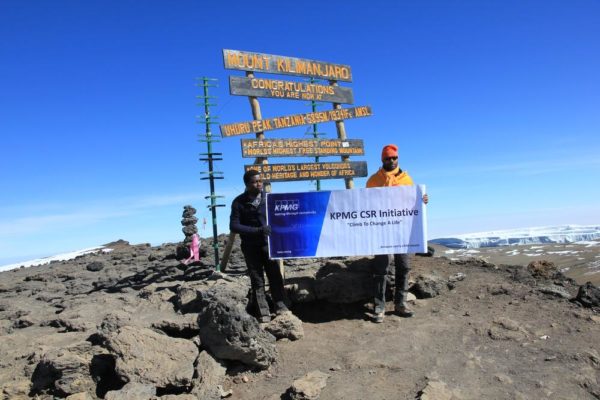 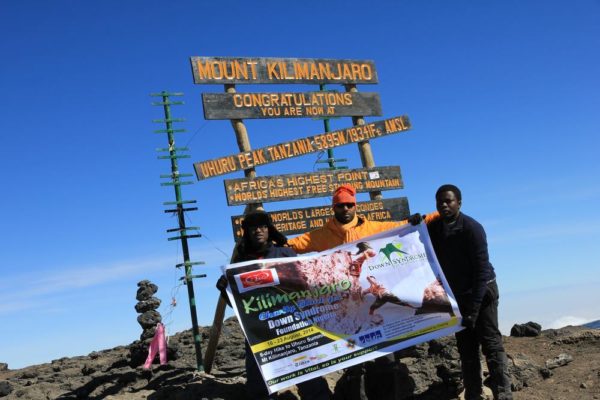 I reached Uhuru peak. So I called for another photo session. By then Thierry had vomited, Umar had developed a serious migraine and Paul looked drained and pale. Everyone seemed to be reacting Uhuru peak and it was gratifying knowing that I wasn’t the only that was messed up by the altitude. I realized that reaching Uhuru peak required an uneven mix of physical fitness, mental stamina and lest I forget, a good dose of luck, as there is no prior indicator of how one’s body would react above 9,000ft above sea level. 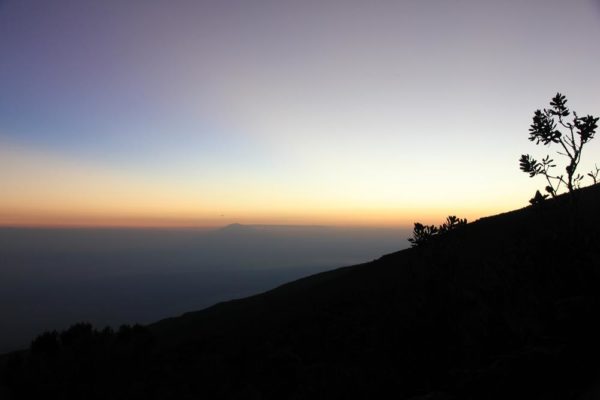 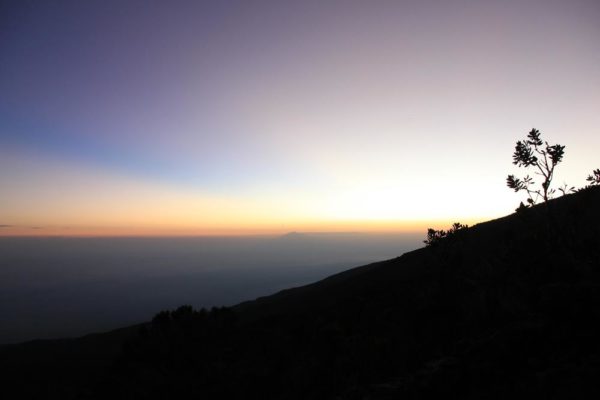 The experience, arduous as it was, was made all the more worthwhile by the realization that it was used to advance a worthy cause. Will I do Kilimanjaro again? It remains in the lap of the gods.