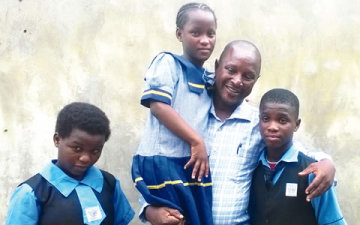 Awww this is great news!

Remember the father who abandoned his three children at an Ogun State boarding school for eight years because he couldn’t afford to take care of them? Well he finally went to visit them last Friday.

According to Punch, the dad, Segun Adepegba, was extremely emotional when he saw his kids. Locking them in a tight embrace, he promised to never abandon them again.

“I am sorry for leaving you, Titi, Seun and Seyi. I am really very sorry. I have missed you all so much. I will not leave you again,” he said to his children.

When he arrived at the school, Solid Model College, there was an angry mob waiting to attack him because they were angry about the fact that he had left his children alone for so long. However, three of Adepegba’s friends who accompanied him on the visit, managed to assuage the crowd, telling them he was sorry for his actions, and that he was a changed man.

The proprietor of the school, Ademola Adeyemi, was overjoyed by his Adepegba’s visit, calling it a miracle, as he had prayed incessantly for his return. “This has shown that God truly answers prayers,” he said.

Upon arriving at the school, Adepegba reportedly prostrated on the floor outside and begged for forgiveness.

“I have offended a lot of people. I have offended my children. I have offended Nigerians. I accept all the blame. And I am really very sorry. I understand that what I have done is very wrong. I was afraid of two things: One was that if I came here, I would be arrested and the second reason was the accumulated debt of the children’s school fees. I reasoned that if I should come to the school, I would be handed over to the police.

I really miss my children and this time around, I am going to change. I want them to have a good educational background so that they can become important persons in the future. I don’t want them to suffer. I will never leave them again. But all these years, I have been battling with hard times. Things have been very tough for me,” he said.

One of the children Titi, expressed that although she was happy to see her father, she would love to see her mother. “I am very excited that my father is back. All I can say is that I am happy. But I want to see my mother too, she said.”

The children’s mother, who reportedly abandoned them over 8 years ago after she and their father separated, has not returned to see them or inquired about their whereabouts since then.

However, Adepegba told reporters that he had recently gotten information about their mother’s location, and that it is suspected that she may be in Abuja. He also stated that her name is Ruth Okochi and that she is from Ogwashi-Uku in the Aniocha South Local Government Area of Delta State.