Esco: Teacher No Teach Me Nonsense 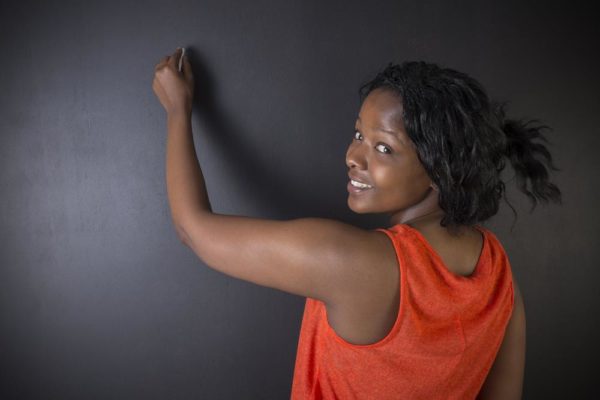 I love all teachers. Teaching is the most selfless profession in the world. Maybe, other than a night-soil man (agbekpo coordinator).
It is fair to say that I would not be the man I am if not for the wonderful teachers I have had at all stages of school life. Let me take you on an odyssey as I remember some of the teachers I have had.

In Primary school, Ghanaian teachers were the proudest with their mini-afros and Safari suits with the huge collars and boot cut pants, looking like they had just stepped out of a 70s discotheque. They also spoke a unique blend of English with some crazy pronunciations “Do yer werk” (They pronounced “work” like “twerk”)
They were also strict disciplinarians too. Mr. Kwame wielded the cane of life, which he garnished with tatatshe and suya pepper until it looked like our Senate President’s mace. By the early 90s, most of the Ghananian, Liberian and Sierra Leonean teachers had returned to their countries, as economic conditions there prevailed over Nigeria’s. Ghana bread also disappeared from the streets, sadly for me.

There was Mrs. Nwama whose son was also in my class, so she was especially hard on him in other to diffuse any notions of partiality. She would ask a question, and if nobody volunteered the answer, she made him a scape goat. If he gave the wrong answer, she flogged him hard with a cane. If he gave the right one, she flogged him for not standing up to answer on time. I hear he is a psychologist now in Yankee.

Mr. Ganiyu our Primary 4 teacher loved to put the whiz-kids students in the front desks, and place the slower learners (whom he repeatedly called olodos) in the back desks – away from sight – which has always been weird to me. Don’t the slower learners need more attention in the front? Me, I chilled in the middle rows playing footsie and biro game with my crush Ejiro. What’s up, ex?

Then there was my teacher in primary 3, Miss Otolo who seized snacks from pupils eating in class, and added the food to her lunch stash, a bit like our government did with the Abacha loot. She snatched my Nasco Wafers from me, but I did not bother to forewarn her that I had been licking the cream in the insides. Fufu flavour.
Then there was Mrs. Olaiya (not real name) now deceased who was our primary school headmistress. That woman was the epitome of class and grace. She never raised her voice, or her hand. Even when she scolded a child, it was with language that the child could barely comprehend at that age, but that the child would recall years later and weep in remembrance.

Chiding two pupils who had been caught thieving someone’s Math-set, she said “there is no honor amongst thieves.” Oh yes there can be.
On the school assembly stage, she would make the reader of the address repeat the pronunciation of the word “theme” until they got the “th” sound. She could not stand any one pronouncing “theme” as “team.”
And I remember her also reprimanding our football team because they were yelling for penariti (instead of the word penalty). She boxed the goalkeeper in the ear for using the wrong word, and he ended up conceding goals like Rufai at France 98. We thought she was being pedantic at the time, but thanks Mrs. Olaiya.
Rest in peace, Matriarch. You were indeed a Fountain of knowledge, and I wore your school stripes with pride as a youngster.

Then there was Mr. Nnaba the music teacher with the buck-tooth scowl and the thick heavy ruler which he used to smack the heads of any student who did not master the music table or who clapped out of sync during rehearsals. His singing voice was like a rat’s squeal, but you dare not tell him.

Then there was Mr. Ogun who adorned the Father Xmas outfit at the annual Xmas concert which was always a blast and an annual fixture of the local social calendar, attended by pupils of other schools, parents and members of the Surulere community. I remember us chorusing that Yoruba Christmas tune, which feels nostalgic right now “keresimesi tu made o”
Mr. Ogun, all 150 pounds of him was a lekpa. For the pageant however, he used stuffed pillows to create Father Xmas’s pot-belly and cotton wool for a beard. The nursery school kids were not that easily fooled as they recognized his toney-red shoes with the Boy Alincoesque pivot heels, and shouted his name throughout drowning out the performance at the nativity play.

He tried placating the mischievous cretins with Jemka chewing gum and Gogo, but it was like trying to control ants with St. Louis sugar. It was bribing little children, which is a bad precedent to set at a young age. Kids are the leaders of tomorrow, just not this election or the next or the one after that.

In secondary school I remember Mallam Damisa the Commerce teacher who shelled repeatedly like a trigger happy Boko Haram commander. He pronounced English words like he was spewing bitter kola and mixed up male and female tenses. To compensate for his bad English, he used big words, but ended up brutalizing the sentence. Once he had caught a bunch of students tossing bangers (fireworks) at night. He made them “kneel down and hands-up” as punishement, before he rebuked them publically “How can you threw such an explosion, for the purpose of a joy.” Question for BH, too.
How could I forget Ma Ogunfe the Mathematics teacher who believed that ‘boarders’ were the scum of the earth, but that day students could do no wrong. Someone had laid a massive ostrich sized egg at the back of the class which stunk the place out. Ma Ogunfe automatically blamed it on the boarders, and made them pack it up, while the day students watched in laughter. Not cool.

By the time I got to the University, the game had changed to a whole new level. Teachers, now, lecturers were less involved, more aloof and had more power to hurt your short term future.
There was Professor X who we nicknamed such for his default propensity to fail students by playing tic-tac-toe when marking answer sheets. There were usually lots of x and zeros when he was done. Like Terrahawks.
Then there was Dr. Ajene, the proletariat, who loved to “humiliate” well-off students by picking on them in class, and sending them on errands to do menial tasks like buy his lunch of moi-moi and pap from the old Buka. You did not have much choice in the matter – you needed to take and pass Philosophy class. Man is born free, but everywhere he is in shackles.

Then there was Roscoe Pound, another lecturer who got off catching cheats during exams. He was a sneaky little so and so. He had probing eyes and was as prolific as a rat trap garnished with crayfish. He caught cheat after cheat after cheat – it was ridiculous. When he pulled out “micro-chips” (a small piece of paper with carefully written answers) from one girl’s bra, she bit him hard in frustration like an ensnared catfish. He wore that bite mark like a badge of honor.

Despite the different characters and personalities of the teachers I have had from nursery school to university, all have played a part in my life and for that I am grateful. Shout-out to the biggest teacher of all, my mum who made me recite the times-table and master counting with table-tops. Look, I made it ma – I now use Excel spreadsheets and pivot tables!
A teacher’s reward is in heaven, but they deserve lots of Naira and Kobo here on earth too.

There were empires in Africa called Kush/
Timbuktu, where every race came to get books/
to learn from black teachers who taught Greeks and Romans/
Nas (I Can, 2002)

Denike Benson: 13 Lessons I Have Learned From Work