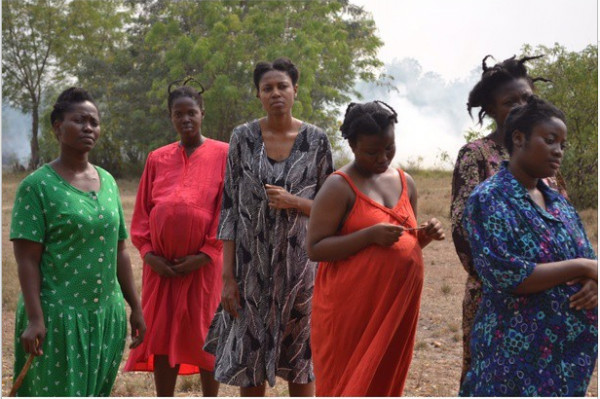 Every movie has a mission it hopes to have achieved by the time the credits start rolling. For some, it’s to crack you up till you can’t take it anymore. For others, it’s the razzle-dazzle of meaningless explosions and fist fights. And there are those that just want to drive home a point which is the fact that there is a God out there looking over us and coming to our rescue when we least expect it. This is the goal of ‘If Tomorrow Never Comes’ – Yvonne Nelson‘s latest project where she plays the lead character, Ewurabena.

If Tomorrow Never Comes is a story narrated by Ewurabena, a young lady who seemed to have seen it all in her short life and had to deal with more than some in a lifetime. You could call her life some, sort of adventure; but not the type filled with hobbits and elves. This is simply a series of tragic events back to back, town to town right from childhood into adulthood.

The movie opens with Ewurabena introducing us to life in her small village where she grew up. A village where everyone seems happy, except her family. It was all sadness and sorrow for herself, her brother and mom

The movie reminded me of the early days of African movies when Nkiru Sylvanus played her classic roles in tragic dramas where evil trailed her through the entire movie. While I did enjoy some of those movies back then, one thing many of them lacked was continuity in linking the scenes and events together and building a strong emotional film.

This is where If Tomorrow Never Comes excels. Right from the beginning, we knew we were in for a movie full of pain and agony. But the question was, how long could the script sustain the sequence of unfortunate events, and how well will the director interpret the script before I have had enough? I am glad to say I waited endlessly and the moment where I would get tired of watching If Tomorrow Never Comes never came. Scene after scene, line after line If Tomorrow Never Comes, turned out to be a well laid out and structured story. Sometimes predictable, other times, not so predictable, eventually the movie does a great job in storytelling and holding itself together, big kudos to Pascal Amanfo.

Pascal Amanfo, who is Yvonne Nelson’s frequent director in her productions (remember the not so good House of gold?), returns with an amazing effort with a team which was able to execute a simple but lovely story. It is a story full of visual glory rich in cinematography, editing and most of all for me, amazing sound design.

While a recurring challenge with African productions is always the sound design, I appreciate the fact that the team recognized the importance of well-engineered sound for a movie which is a narrative. The movie had some of the best soundtracks out of an African production I have heard in a while. The soundtracks were well paced for the right scenes and further drove home the strong emotions that the movie was trying to pass across.

The only issue I could spot technically was the inconsistency in shape and size of Yvonne Nelson’s pregnancy as well as the shape of every other pregnant lady in the movie.

While I sat in my dark corner in the cinema hall watching the movie unfold, I couldn’t help but be captivated by the performance put into the movie by Yvonne Nelson, the young Ewurabena,  Becca and Adeyemi Okanlawon. Yvonne Nelson’s chemistry with Deyemi grew as the movie progressed and at a point I was hoping for their relationship to work out.

Yvonne Nelson’s narration was so good; it could have almost given Morgan freeman a run for his money (haha! Just kidding) At the end Yvonne Nelson delivers an emotional and riveting performance worthy of an AMAA Award.

By the time the movie ended, If Tomorrow Never comes had moved me to tears. I couldn’t help but ask some questions about life and also wonder if some people are really these unfortunate in the world. The movie achieved its intended goal, which I believe is for the audience to sit back and think about life. Thus, it earns a Popcorn And Soda for being such a beautiful movie.

I recommend the movie be seen for those who are looking to see a movie with depth and thought provoking philosophies about life.

Prior to the film’s release, Yvonne Nelson claimed the film was going to be the film of the year and she just might be right. That said, it’s still a little too early to judge. Plus Stephanie Linus‘ Dry is still dropping this year, so that claim might be a little premature.

Have you seen the movie? What do you think about it? Share your thoughts in the box below.