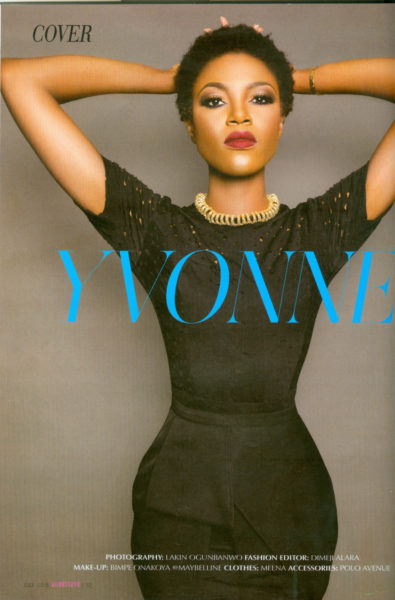 Yvonne Nelson’s personal life is probably the most talked about across both the Ghanaian and Nigerian movie industry.

While promoting her new movie ‘If Tomorrow Never Comes’ the movie star has been doing media rounds and nabbed the cover of Genevieve Magazine’s July 2015 issue.

While chatting with Genevieve magazine, Yvonne Nelson opens up like never before about her personal life and talks about Ice Prince, Iyanya, John Dumelo and why Nigerian men are the biggest liars.

On the feeling of being in love: I miss the late night phone calls, and the never-ending text messages. I miss that strong sense of desire that exists between two people who can’t get enough of each other. I miss that rush of adrenaline, the weakness at the knees and that joy that makes you laugh even when there’s nothing funny. I just miss loving someone and being loved in return.

On her next relationship: I don’t know yet. I can’t say I want a Nigerian, or a Gambian or a Cameroonian. When it happens, it happens. But Nigerian men can lie. Nigerian guys can lie for the whole of Africa. They will come with all the lies because they know that women respond to the things they hear. The lies are just so crazy. And I’m not some 19 year-old who just wants to have fun. I’m not in that place anymore. So I’m taking my time to get it right.

On her relationship with Iyanya: We did have a relationship. I loved him at a point. It just didn’t work out.

On the possibility of dating him again: Never! It’s like eating your vomit. No way! It’s not happening ever. As a matter of fact I’m not interested in anybody in the arts, because it is not the right place to invest time and emotions. A lot of entertainers have so much on their table, so they would not give the real thing. I know my values; I am loyal and straightforward, but a lot of entertainers are not like that. They would just lie to you and waste your time. That is because, like pilots, entertainers go around a lot. In every country a pilot goes to, he can decide to have a wife or girlfriend. So they can actually lead like a hundred different lives and none of these women will know.

On learning from past relationships: Don’t believe the hype. Don’t believe all the things men say. A man who is all-sexual from the very beginning is a no go area; he just wants to jump into bed into you. If a man truly loves you, and is ready to be with you, he will be there for you. Relationships are much more beautiful when it starts as a friendship. So you are able to goof around with the person. I love goofing around. I love to be myself and do funny videos. That’s why people think that John Dumelo and I have a thing, because John is such a perfect friend.

You can read up her full feature with Genevieve Magazine by picking up a copy of the July 2015 issue.

BN also got an exclusive with Yvonne Nelson about the positive impact of her movie and much more juicy details – which we will be bringing to you soon.

Kylie Jenner Steps Out with Mum Amidst Tyga’s Cheating Rumours