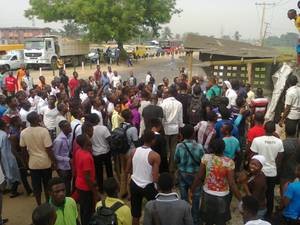 The members of Organised labour and pensioners on Tuesday demonstrated in Owerri over the non-payment of more than 10 months arrears of pensions and salaries owed them by the Imo government.

The News Agency of Nigeria (NAN) reports that scores of pensioners and workers dressed in black dresses had assembled at the entrance of Imo State House of Assembly as early as 7 a.m.

The placard carrying workers and pensioners marched on major streets in Owerri to press for the payment of the arrears of the salaries and allowances owed them.
Some of the placard reads, “Pay 10 months salaries of ITC workers now; Owelle pay retired workers their gratuities and pensions; The Soul of the Dead will not rest until their terminal benefits are paid to their next of kins’’.

The Speaker, Acho Ihimi, who addressed them, said that government was seriously working toward liquidating all the arrears owed workers and pensioners in the state.

Ihimi said the bailout fund which the state government expected from the Federal Government was yet to come, adding that every worker would be paid when the money arrived.

He dismissed as false the speculations that the state legislature was deliberating on a bill to scrap all state-owned parastatals.

“The concern of the Imo House of Assembly under my watch is to make laws that will enhance the welfare of our people and not otherwise,’’ Ihimi said.

Austin Chinakpu, the state Chairman of the Nigeria Labour Congress said the protest was to let the public know the predicaments faced by pensioners and workers in the state.

“Various arms of Imo organised labour are owed between four months and one year salaries, while the pensioners’ situation is more pitiable because majority of them are dying due to non-payment of their gratuities and pensions,’’ he said.

Gideon Ezeji, the State Chairman of Nigeria Union of Pensioners, said that pensioners were owed 20 months arrears of pensions, while arrears of gratuities dated back to 1998.

Mose Erekaha, the State Chairman of Amalgamated Union of Public Corporation, Civil Service Technical and Recreational Services Employees (AUPCTRE) decried the sack of over 300 workers of Imo Transport Corporation by the government.

He added that most ITC workers had been forced out of their houses, while their children now hawk to make ends meet.