Seyifunmi Ajanaku: Pros & Cons of Living in the Past! Read the Review for "Road to Yesterday" 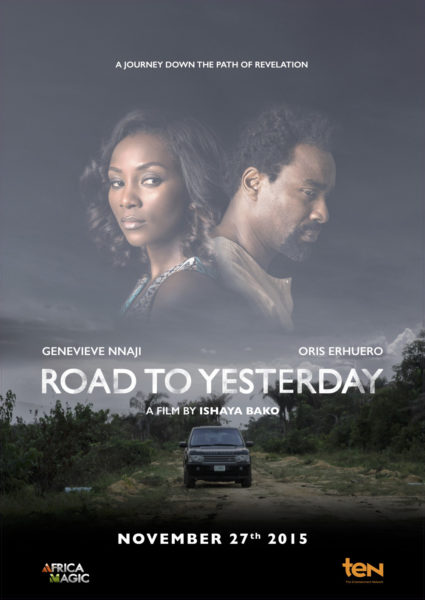 Living in the past can have its upside and downside. One must decide if taking a journey to the past is well worth it before embarking on it. However, sometimes to find answers/meaning you must look back and examine your past. This is what this movie Road to Yesterday by Ishaya Bako tries to establish.

Road to Yesterday, which is set to be released in Lagos on the 27th of November 2015, stars Genevieve Nnaji, Oris Erheuro, Chioma Omeruah a.k.a Chigurl and Majid Michael
I watched the film at a private screening in Lagos on Tuesday the 27th of October, 2015. Genevieve Nnaji is the executive director and movie is produced by Chinny with Idowu as the director of photography.

Genevieve Nnaji as Victoria, is in an estranged marriage with her husband Izu. This modern day love story centers around a couple in a troubled relationship; things get more strained when their child is diagnosed with the sickle cell disease. They must learn to communicate with each other if their marriage is to survive.

The Road to Yesterday feels ‘Inception-ish’, (the 2010 film starring Leonardo DiCaprio) because the techniques for the story narratives are quite similar. One minute you are living in present day 2015, next you are back to the past. If you aren’t paying much attention, you might have questions. It is, however, beautiful how everything ties up at the tail end of the movie.

The story is set on a road trip, intended to be mostly that. It is a trip down memory lane – I guess I like how it is portrayed that a road trip could also be a mind’s trip and not the physical act of traveling.

The movie is set in Lagos and its environs with attempts to capture scenes from out of Lagos State. The aerial view capturing some key parts of Lagos were amazing.

It appears that drones are becoming an interesting part of moviemaking and it is a welcome development. I particularly found the scene showing the Third Mainland bridge, breathtaking and added to the general aesthetic of the movie.

The general acting was superb and realistic. It was interesting to see Genevieve Nnaji back on the screen, and I wasn’t surprised or disappointed with her acting. It was her British co-star Oris Erhuero who was a delight to watch with his equally brilliant performance. I had never noticed him in any movies before now. The director made good use of space creating wide angle views. Chigurl added her personality to the movie creating a fun side to an otherwise ‘serious’ movie.

As with every movie however, there are both low and high points. I’ll highlight some bits I noticed and hope you still enjoy the movie when you do get to watch it.

Build up
The movie picks up very slowly (almost draggy). 15 minutes into it, you are still left wondering where the story is headed with the plots. Especially because there’s a very limited supply of soundtrack involved in the storytelling.
It picks up eventually, becomes intriguing. With that, you start to notice little clues here and there buried in the movie that add up.

Dialogue
Dialogue shouldn’t be forced. The viewers must believe that it is really happening and not a script reading.
The scene at the bar with the guys wasn’t believable one bit; because with regular drinking buddies and friends, you would expect a certain level of comfort and that was missing for me. The presence of alcohol (indicating inebriation) should have eased up the scene a bit more, but failed.

Unnatural Reactions
Brace yourself for a bit of cringe worthy scenes with this one. Some scenes with the main actors seemed forced, and lacked the on-screen chemistry expected of them. However, it felt like the present day situation (mood of the movie) affected the past scene where they were trying to be spontaneous and romantic.

Their marriage became troubled, so selling the lack of chemistry was very believable; but for the past where they should have been doe-eyed lovebirds, I wasn’t sold. It didn’t make me scream ‘I want that’. It was more like ‘make it stop!’

Continuity
Some details are hard to miss, and tend to take away bits of the movie. I would have expected more attention be paid to some key elements of the movie like ensuring scenes are continued and believable. Pay enough attention to details and you might pick up on some of these things but it doesn’t exactly kill the story line or focus. Viewers who are particular about details might just find those discrepancies a put off.

Plain Truths
The beauty of Nollywood is in telling real life stories with facts as they present themselves. This movie embraces this and uses it to its advantage. It doesn’t seek to cover up flaws about Lagos and I think that is something that everyone can relate with. It is presented in the most realistic way, from the dialogue to the body language.
We aren’t sold a futuristic Lagos – where everything is sane or abiding with law and order, but as it is in the present day. The encounter with the policeman represents this fact very well; painfully but humorous at the same time.

Montage
This was beautifully infused and done creatively. The director of photography did a decent job. The fluidity with which the scenes moved back and forth without losing key elements of the movie and kept the audience engaged was well worth applauding.

Music
The soundtrack (when provided) was nice and flowed with the movie. Also it helped that Brymo’s music was featured in this movie. I’m a huge fan of his work and “Down” is a beautiful song. The choice of music adds plenty to the coming together of this movie.

Comic Relief
I loved how there was a fun side to this otherwise intense movie and thankfully it wasn’t overbearing. It was just the right mix of humor and sensitivity.

Thankfully there was no forced humor that felt out of place. The comic was infused effortlessly as Chioma ‘chigurl’ Omeruah’s humor was spot on. I’m glad we got a very toned down version of Chigurl on this movie, it was very believable and enjoyable to watch.

Plot and Twists
A great movie is sold for its plots and twists and how captivating or interesting it is to its viewers. This was a different way of portraying a love story.

I think a huge risk was taken with the storytelling style of this movie. This could either be embraced as a welcome development by outside of the box movie lovers or criticised by the restricted to the box type viewers. I’ll let you be the judge, but I enjoyed it.

The director nailed this part of the movie though.
You realize why her eyes were red for most of the movie at the tail end of the movie. The play with hallucinations was very tactfully done, this was the highlight for me. How well it was executed.

Life Lessons
Issues of life are raised with this movie. Polygamy, humans flaws and deceit. Sickle cell anaemia is one of major issues addressed as well. The importance of communication is also highlighted focusing on the need to always lay off assumptions and seek validated answers.

The end of the movie should ultimately surprise you, but if you are like me (paranoid-realist) you already thought of it as a possibility half way through the movie.

I left the movie screening with a few questions on my mind like – why does she keep asking “the why do we love?” question. I don’t see what he relevance is, or maybe I just wasn’t paying enough attention? Hopefully, I would find meaning when I go back to watch it at the cinema – not as a reviewer but as a normal everyday movie lover.

Seyifunmi Ajanaku is  a fashion enthusiast and lifestyle blogger with an eye for details with a quirky almost non-conventional sense of style I love to read, write and discuss everything fashion. I'm a strong believer that Fashion is art; art in itself is beautiful. I am dedicated to helping people maintain a great image as they embrace their personal style as I find that this also builds their self confidence in positive ways. I run a lifestyle blog at www.crystalclearwords.com