BellaNaijarian Susan* Tells the Story of Her Marathon Experience as a Big, Bold, Beautiful Nigerian Woman 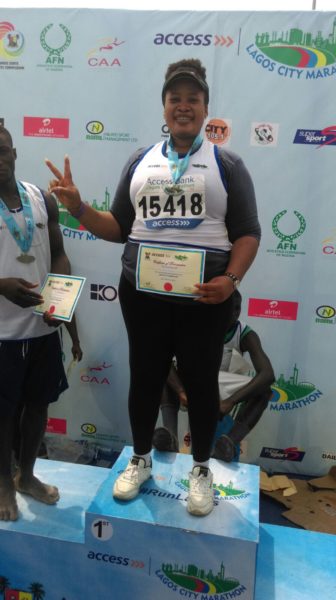 It was 7 am on Saturday February 6, 2016. I stood at the National Stadium, Surulere, Lagos, at the starting line of the Lagos Marathon, in the midst of the crowd of over 20,000 people from around the world. While the world was eager to see who would “run Lagos” and claim the 50,000 dollar prize, it was clear to me who the competition was.

The competition was not any of the famous long distance runners from the East African hills of Kenya and Ethiopia who, it appears, nature and nurture had shaped for endurance racing.

The competition was not any of the professional marathoners who had “been there, done that” and for whom the 49.125km race was probably going to be just another pleasurable couple of hours.

The competition was not any of the athletically built men and women all around me who seemed poised to flow with the wind.

The competition was the cacophony of voices raging in my mind with a thousand and one reasons why I was a misfit for the race and striving to make me accept the notion that I could never make it to the finishing line, not the least because I am a plus size woman.

I have always been plus size all my life (UK24 at my largest size) and over time had come to accept it. I was past caring and paid no attention to taunts and jabs, but rather, flaunted my fabulous self in people’s faces and, as a result, garnered a lot of nicknames like: BBB (Big Bold and Beautiful), Lady Fabulous, Global, Global Excellence, Orobs, Queen Bee, and so on. Due to the confidence with which I flaunted my size, I even had people tell me that I made being plus size very attractive! I took this as a worthy compliment.

As the artistic, creative and fashion forward person that I am, I decided to turn the lemons that life had thrown at me into lemonade by starting a clothing line for plus size women with a dream to infuse confidence through fashion to the plus size status. I quit my job in September 2013 to pursue that dream. Indeed, the clothing line was merely a channel for this bigger dream – restoring confidence to the plus size woman.

I hate, with passion, the association of plus-size status with sluggishness and awkwardness. I say to plus size women all the time that one can be big, yet fit and fashionable. Along the line, as a result of several disappointments, the clothing line didn’t take off as expected but I never gave up on my dream.

I deployed my passions elsewhere, exploring other areas of my career and personal interests and eventually found myself in a centre for people living with Intellectual and Developmental Disability (IDD) – Children’s Developmental Centre, Surulere, Lagos as a volunteer speech therapist. I stayed on with these people whom I call “unique individuals” as compassion wouldn’t let me walk away. 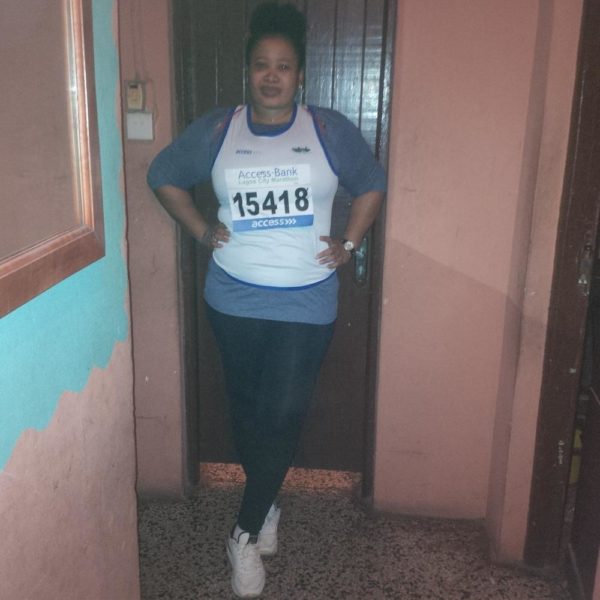 My “big but fit and fashionable” drive was reawakened in October 2015 when I saw a picture I had taken at a wedding reception earlier in the month. I wasn’t comfortable with how big I had become. Right there I made up my mind to do a complete lifestyle overhaul. I resolved to remain plus size, but without the flabs! I joined a fitness club, started rigorous exercises and dieting, cutting out junks and sweet indulgences and, by December 2015, I had lost four dress sizes (from UK22 – UK16). I was ecstatic and resolved to continue with my new lifestyle. With feedbacks, compliments and questions pouring in from all quarters, I started blogging about my weight-loss journey (See hrmadeolavincent.blogspot.com). 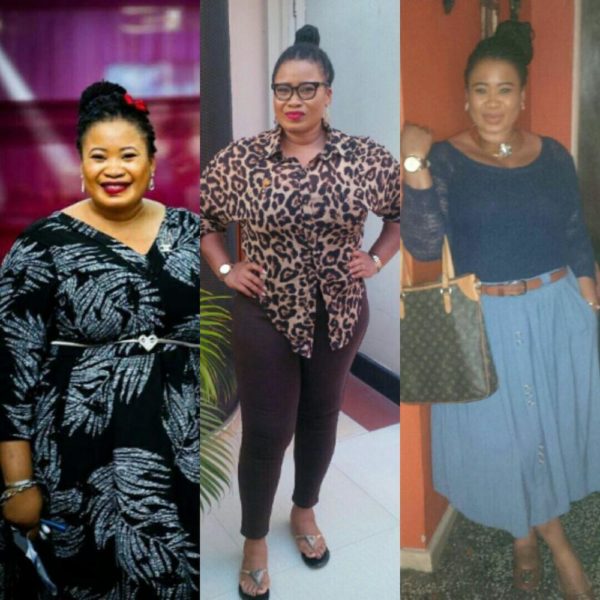 In January 2016, I read about the Lagos Marathon online and registered immediately. Because I wasn’t sure I could do it, I never mentioned my plan to participate to anyone until two days to the event. I didn’t think I could go the whole 42.195km because I have never done a marathon before, not even a half marathon! My greatest athletic feat was long jump and 200metres race in my high school days, so running a full marathon seemed like a huge joke! When I eventually told family members, friends and colleagues that I was going to “run Lagos”, they taunted me. I was told that, of the 42.195km, I wouldn’t go beyond 1km at the most. 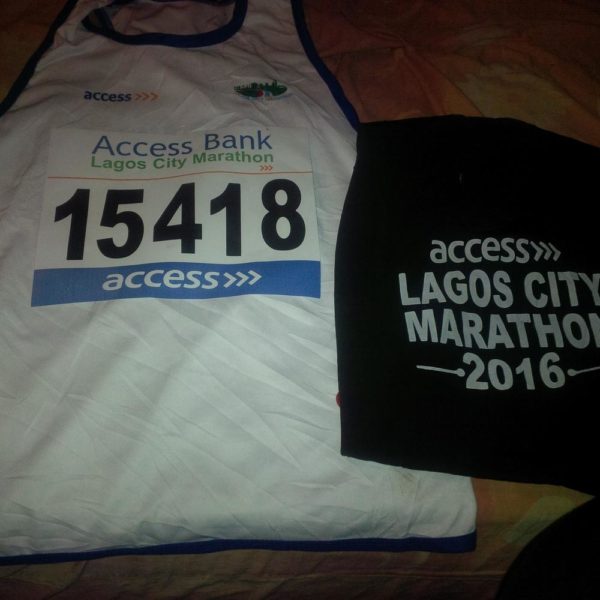 With these in mind, as I heard the starting gun, I felt like I had set out to “walk on water” but I reminded myself that I could do all things “through Christ who strengthens me”. As I took the first step, I felt a surge of hope and energy, call it adrenalin or what you will, but I saw a reason to run.

I saw those little kids struggling to learn and to live, the ones society has labelled intellectually and developmentally disabled – those “unique individuals” in my workplace and all over the world whose unspoken aspirations gave me a reason to wake up every morning.
I saw every plus size woman who had been taunted and told that their size was a liability they could do nothing about.
I saw every man, woman, boy and girl with a dream they can’t shake off but which society had tagged impossible; and so I decided to run. 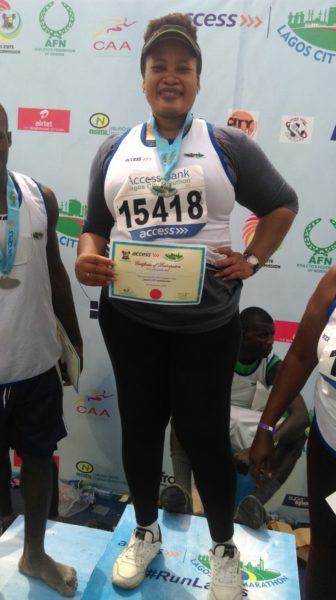 I ran to let those kids know that they can be the very best that God had made them to be because they are beautifully and wonderfully made. I ran to let every plus sized woman realize that being big does not mean one can’t be fit. I ran to let every dreamer know they don’t have to give up their dreams, no matter the odds.

And so I started the race at the National Stadium by 7:00am with my mind on the goal and didn’t stop to rest or use the bathroom until I got to the finish line at Eko Atlantic City by 1:25pm. I had run the entire 42.195km in 6 hours, 25 minutes! I may not have come close to winning the prize-money but I won the race. I won it together with those I ran for and I won it by the help of God. I won it with those unique individuals for whom the month of March has been dubbed the international “Developmental Disability Awareness” month; I won it with every plus size woman who takes up the discipline, says no to junk, shakes off the fatigue and heads to the gym, not in insecurity but in confidence; I won it with every dreamer who refuses to let their God-given dream die! Yes, we won because, in life, like in the marathon, it’s not about who gets to the finishing line first, it’s about you getting there. That’s a lesson I promise to pass on to my children and grandchildren.

So, as you face life’s challenges, let the words of Meb Keflezighi, U.S. Olympic Marathoner, remind you of my Lagos Marathon story:
“Like the marathon, life can sometimes be difficult, challenging and present obstacles, however if you believe in your dreams and never ever give up, things will turn out for the best.”

My name is Susan and yes, you can call me a “Marathoner”!