Nkem Ndem: Best Friend or Boyfriend? 4 Signs That Guy is a 'Bae Blocker' 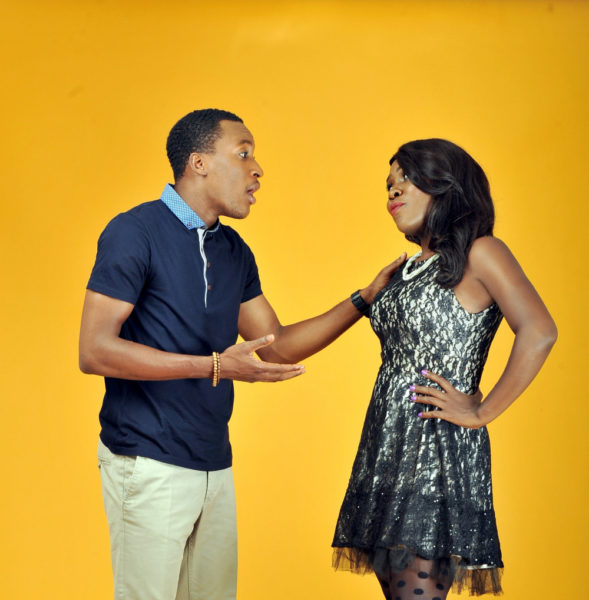 A few days ago, I put up a fun picture of one of my best friends(To keep things simple, I’ll refer to him as R. Kelly) and I on BBM to celebrate his birthday, and I got the weirdest comment. Just about five minutes after I posted the picture, a friend who has known R.Kelly and I for almost as long as we know each other sent in a message: “CONGRATULATIONS!!! You guys are finally doing it!”

At first, I was ‘perplexed’. What was she on about? Being the curious person that I am, I sent in a reply: “uhm…plix, what are we celebrating?” “Your engagement now!” she replied with a plethora of emojis.

At the word “engagement”, I must confess, tears of joy quickly sprang to my single-and-searching eyes. But then, in split seconds, I realized there was no need for the ebullience as she was not making any sense. “I don’t get? What engagement? This is Nkem”

“Isn’t that a pre-wedding shoot?” she replied with a sad emoji. (Please observe the picture attached to this article)

“Are you alright?” I responded with hesitant laughter.

Kelly and I have kept our friendship under wraps for a long time now (for reasons I will not share), there was no cause for the impression she had, at least not anymore, especially since she also knew that R.Kelly has a steady girlfriend at the moment.

Obviously, our conversation ended there but it got me thinking. I have always introduced R. Kelly, when I had to, as my BF: Best Friend not BF: Boy Friend, but could that possibly be the root of the confusion? I mean, in the course of our friendship, there have been times R. Kelly’s girlfriends and lovers have given him dire ultimatums to choose between them and me, but the two guys I dated never seemed bothered… or had I been blind to the clues? Quickly, I called two other male friends and of course, my ex (yes, we are still very good friends) to verify. All three pointed to the fact that R. Kelly was indeed a ‘baeblocker’, which in this case means: someone who intentionally/unintentionally prevents a friend from having or getting a ‘bae’.

Of course, learning that my best friend has been baeblocking me all this time has been a hard pill to swallow. Like… “adonbilivit”! But then, why is it so hard for people to accept the fact that a boy and girl can remain best friends with no strings attached anyway? They just have to find a way to give it a ‘K’ leg. Anyhow, I decided to share in this article, four of the different signs I was informed that reveal a male best friend is a baeblocker; that way, other girls with male ‘besties’ are in the loop.

He is your perpetual wingman
He basically offers to do everything with you and go everywhere with you: attend events, parties, outings and even church. Your schedules are synchronized so that you are both free to do the same leisure activities together. You friends are his friends and vice versa…so basically you run in the same circle. In fact, people get worried and believe something is wrong when you show up to an event alone, and it now seems as though there is no you without him. While this is what having a best friend should mean, apparently, it can have the adverse effect of dissuading single guys who want to approach and toast you. Quite recently , I attended a mutual friend’s party without R.Kelly and one of the guys I knew since Covenant University walked up to me and said: “Wow, I can’t believe you are here without R.kelly, I have waited for this moment for years.” Two seconds after soaking in the effervescence of his halitosis, I grudgingly granted him a shy smile…but in my head, I was totally saying “Please step aside and keep waiting”. Think about it, if a guy is really interested in you, shouldn’t he brave it all and pursue you, perpetual wing man or not?

He never approves any guy
Anyone who has a best friend or close friend understands the nagging need for your friend’s approval when you find someone you like or intend to date. If he always finds a reason why every guy you talk about is not good enough for you, he fuels your negative thoughts about that prospective bae, and seems to be most comfortable only when you are single, he is definitely a baeblocker. It does not matter if he does it on purpose with the belief that your choices are wrong or he does it unconsciously because thinks highly of you, there is a chance you will remain single for life if you do not tackle it. Actually, this was the point that sold the idea that R.Kelly might actually be a baeblocker, as I recalled the myriad phrases R. Kelly had thrown at my love interests over the years: “Babes, he has stretch marks and boobs biko, come on!”, “I am serious, look at his feet, I am very sure his ‘uhlala’ is like a tiny chalk”, “ Ah! no now, I thought you said you are sapiosexual, that dude is a complete buffoon, haba”. Luckily, I got the chance to address this last year, and though we lost a bit of our intimacy, we set firm boundaries.

He shows PDA in front of possible bae
The moment there is another guy around – whom you obviously might find attractive or interesting, he hovers around you, holding your hands even though there is no need for it. He spends the whole time touching the small of your back, caressing your cheek or brushing his fingers on your forearm; smiling and looking into your eyes when he speaks to you. He opens the door for you, holds your hand bag, sits next to you and put his arm around your shoulder or around your waist, stroking your hair when he knows you’d rather have the other guy doing all that. Real gentlemen seem to have the unspoken code where they don’t pursue a girl they feel another brother is ‘into’, so, these affectionate gestures, although sometimes innocent, fester on the mind of the prospective bae, forcing him to give up on you even before he gets the chance to know you. While PDA comes naturally to friends, especially when they’ve been together for a long time, it can actually be a major reason why one of them remains baeblocked.

He loves you
Obviously my ex came up with this idea as a sign. “He loves you now…are you saying you don’t know? He even says “love you” after every phone call, who does that? The dude was baeblocking you even while we were together”. While his pained response was a shocker, and was definitely bias, I got the gist of what he was trying to say. Of course your best friend is meant to love you, and vice versa; of course you are meant to be expressive about love! Life is too short not to share positive feelings when you have them, but as it is, you may want to be smart about it if you don’t want to be baeblocked. If he loves you and is publicly expressive about it, especially when you have a bae, he may be baeblocking you – he may be the reason your bae breaks up with you eventually, even if he doesn’t state it as a reason.

Bottom line: It is okay to have a male bestie. You may be baeblocked sometimes, however, understand that he may not be out to destroy your chances at love (unless he is secretly in love with you and like Ifeanyi William Moore, he is on attack and trying to pull a snatch). Do not end your friendship based on the baeblocking matter. Actually, 9 out of 10 times, you are the reason you are being baeblocked, as you basically gave the baeblocker the chance to baeblock you in the first place. All you need to do is set some boundaries and ensure you and your friend observe them.

Over the years, R. Kelly and I have had ‘treasured’ moments: him pulling out my hair (literally giving me a large bald patch) because I refused to give him an equal share of Suya that I bought with my own money; him kneeling down in the middle of a crowded road with (fake) tears in his eyes, begging me to end a solid 3-day I-do-not-give-a-sh*t-about-you silence, and so much more. Certainly, it would not be wise to end a long term friendship over a baeblocking allegation, would it?

These signs I have listed are based on opinions from close friends and are possibly just unique to my situation…but then, what do you think? Have you ever been baeblocked? Did you notice any of these signs and are there more? Share your thoughts and experiences in the comment box below.