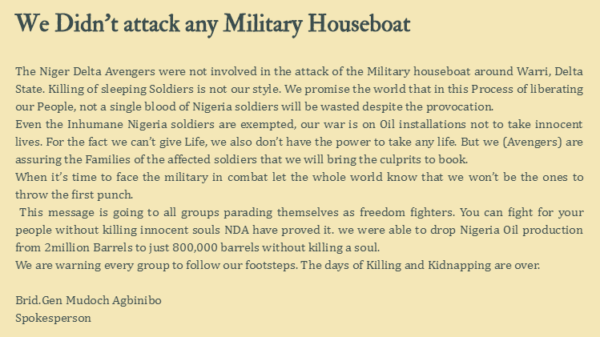 The Niger Delta Avengers have denied rumours that they attacked a military houseboat in Warri, Delta state that left 2 soldiers and 4 civilians dead. Click here if you missed it.

This was contained in a statement signed by their spokesperson Brig.Gen Mudoch Agbinibo. The statement which was posted on their website read:

The Niger Delta Avengers were not involved in the attack of the Military houseboat around Warri, Delta State. Killing of sleeping Soldiers is not our style. We promise the world that in this Process of liberating our People, not a single blood of Nigeria soldiers will be wasted despite the provocation.

Even the Inhumane Nigeria soldiers are exempted, our war is on Oil installations not to take innocent lives. For the fact we can’t give Life, we also don’t have the power to take any life. But we (Avengers) are assuring the Families of the affected soldiers that we will bring the culprits to book.

When it’s time to face the military in combat let the whole world know that we won’t be the ones to throw the first punch.

This message is going to all groups parading themselves as freedom fighters. You can fight for your people without killing innocent souls NDA has proven it. we were able to drop Nigeria Oil production from 2million Barrels to just 800,000 barrels without killing a soul.

We are warning every group to follow our footsteps. The days of Killing and Kidnapping are over.

The group also tweeted that they have blown up three more oil facilities between Thursday and Friday.

At about 2:00am today @NDAvengers blew up the Ogboinbiri to Tebidaba and Clough Creek to Tebidaba Crude Oil pipelines in Bayelsa State.

This is inline with our promise to all international Oil companies and Indigenous Oil Companies that Nigeria Oil production will be Zero.

At 3:00 am today @NDAvengers blow up the SPDC forcados 48″ Exportline. We warned SPDC not to go ahead with repair works but they refuse.

At about 3:30am our (@NDAvengers ) strike team Blow up the Brass to Tebidaba Crude oil line in Bayelsa.. #BOOM

Related Topics:Niger Delta Avengers
Up Next