Tomilola Adenuga: How Expensive is Your Fashion? 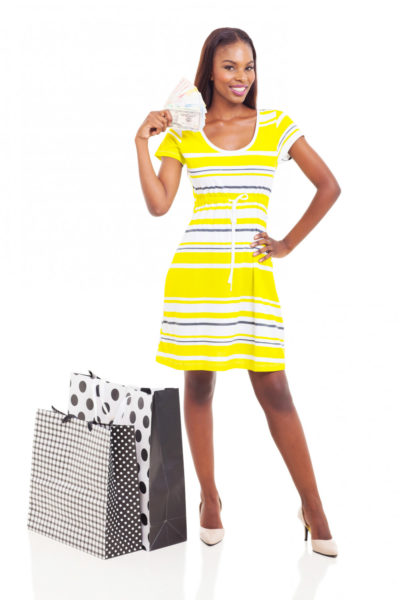 I had been waiting for over an hour at the reception area in an office for a meeting. Although I had been engrossed with my work, I was open to have some “small-talk” with the receptionist who had been nothing but friendly to me since I arrived.

As we got talking, she asked for my Instagram handle, which I obliged and after some few scrolls, she looked at me and burst out laughing.

“You can’t be serious”. She said with a straight face, I thought we were acting out a movie script. I couldn’t make out the emotions she displayed but I could sense some sarcasm.

She was shocked that I introduced myself to her as a Fashion Blogger and Beauty enthusiast, but there was I tagging and representing in my photos some very cheap and high street retailers namely H&M, PRIMARK or NEWLOOK e.t.c.

I tried to educate her on my beliefs, but I knew I could not win the argument with someone who had a myopic mindset. I continued my job till I was ushered in for my meeting.

As I left the building some 30 minutes later, our eyes met and she kind of looked remorseful. I bet she had spotted my “red soles” as I walked in for my meeting. I dared her to ask me if it was the original version.

My opinion- I would rather wear a “very cheap” or should I say “affordable” high street retailer than try to feel among whilst adorning a knock-off “Gusci”.

The question I get asked most times which I would like throw open is does spending a lot of money give you a pass mark as a fashion enthusiast or as we would say it a fashionista?

I love fashion, I write about Beauty and Fashion. Not just about myself or what I wore but I am even more interested in what others are wearing and how they do it with so much creativity. Regardless, if you spent a quarter of a million on a pair of Sophia Webster or a Manolo Blahnik or Zara, I should be able to applaud your creativity whilst admiring your sense of style.

I confess that I sometimes splurge and buy some expensive items- for three major reasons, the quality, making a statement and because I particularly love that item but on many occasions, I think of many other ways I could spend half a million Naira rather than spend it on a pair of shoes. I know with far lesser amounts, I can also get quality and beautiful items, which will make me, be all shades of confident if I was to have lunch with the Duchess of Cambridge.

There are many sides to the argument. Some people argue that despite some folks adorning themselves with the most expensive luxury items, they don’t look like the investments they have made. Yet many patronize the boutique sellers who import from Turkey and China and look like a million bucks.

As much as I see myself as a fashion enthusiast; quality, beauty and overall style count for me – not calculating the amount spent as the first criteria.

I am a firm believer that I can find rubies amongst thorns if I am very patient. A fellow blogger once asked me about my decision making when purchasing some fashion items and I advised her not to break the bank in order to look good. A 5k top if accessorized properly and worn with the right apparel should make me stand out.

Her argument? The top fashion, wedding, beauty sites won’t give her a mention if she does not tag the Manolo Blahnik, Rupert Anderson, Anya Hindmarch, Aquazzura or BCBG Luxury stores. I was gobsmacked. Really?

I think to every man his one and need I say, I have the most wonderful and surprising friends.

My friend, Ifeoluwakite, just had the sweetest baby girl ever. Her pregnancy food cravings were soooo weird. She called me one day and told me she was craving UNILAG’s DCC “ewa agonyin”. I bought some for her on my way from the Island one certain afternoon not minding the quizzical looks I got from the students as I carried the big 3 liter bowl of Supreme Ice cream converted solely for ewa agoyin.

You won’t imagine my shock when she called me two weeks later informing me she was in London and if I needed to get anything. What? We had not even done her baby shower, she was not close to travelling yet and I knew she was definitely not having her baby at the United Kingdom.

“So what is happening in London?” I queried. In her very cheery voice, my friend replied she was craving airline food and before anyone could stop her, she bullied her husband to buying a return ticket for five days. She had not informed any of her friends prior to making the trip because like my mother would say, “Omo Onigbese”.

I couldn’t believe my ears. This was someone who always complained about how crappy airline food was anytime we went on a trip. I could not process the amount, time and stress she went through just to satisfy her cravings.

As I imagined the length people could go to stay happy, I also reflected on this same friend who had complained to me that she would never pay a tailor or fashion designer up to 15k to make a dress. For what? She had a tailor at Ojuelegba who made very nice pieces. All she did was to borrow some very nice styles from asoebibella and show them to Mr. David. Even with their frequent fights, she always managed to look very nice despite paying between 3-5k for her outfits. As much as I abhorred and reprimanded her, I have also secretly nursed the idea of visiting Mr. David at Ojuelegba.

Let’s not start another conversation on how one needs to be prudent in this present economy, all I will say is “Wisdom is profitable to direct”.

Fans of Wana Udobang’s Room 313, Get In Here! It’s Time to Check Out Naomi’s Story