Arese Ugwu discusses Pitching to Brands in Episode 4 of "African Ambition: The Road to #TSMWSeries"

Tomike Adeoye's Baby Girl is Two Months Old! Her Get-Together Vlog has all the Scoop 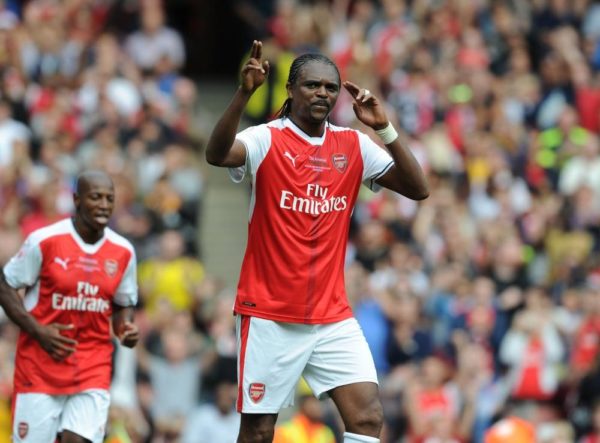 Nigerian football icon, Nwankwo Kano, on Saturday proved that age has not taken away his attacking prowess as he scored a hat trick for Arsenal Legends against AC Milan Glorie.

The game ended 4-2 in favour of the Arsene Wenger-led side.

Kanu, who had thought he was part of the first eleven, came off the bench in the 25th minute to score the first goal for Arsenal 2 minutes later.

Vieiri made it 1-1 for Milan in the 37th minute, and a header from Kanu in the 67th minute put Arsenal on the lead again.

Kanu completed his hat trick with a penalty kick in the 79th minute. Pires scored the fourth for Arsenal 5 minutes later. Vieiri made it two in the 88th minute after a rebound kick following the penalty save by Arsenal’s goalkeeper, Lehman.

The surprise was Kanu, because nobody knew where he played and he turned up with something special again. Players like Freddie Ljungberg and Robert Pires are still completely fit, and Kolo Toure, I’m not surprised about because he still plays for Celtic.

The class has not gone, the quality has not gone – the legs a little bit! But not too much. They had enough resources to make the game enjoyable. It is a great afternoon and that shows our values at the club because we raised one million pounds for the charity and we can be very proud of that.

Fans took to Twitter to hail the former Super Eagles player, adding that Wenger should replace his current striker, Olivier Giroud, with Kanu.

Uncle Kanu’s still got it ??

I would still have Kanu over Giroud. Form is temporary, class is permanent

I think I speak for everyone when I say: sign Kanu.

Retired Kanu still has more pace and is still more clinical than Giroud.
Wenger sign him up on a free bikonu??

Watch the highlights of the game below: