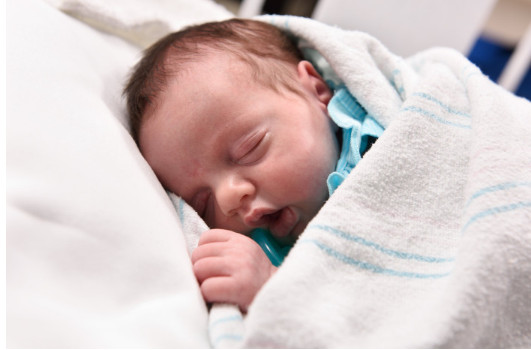 A baby girl, Lynlee Hope, from Lewisville, Texas, has been “born” for the second time after she was taken out of her mother’s womb for life-saving surgery, the BBC reports.

Her mother, Margaret Hawkins Boemer, when she was 16 weeks pregnant, discovered that her daughter, had a tumour in her spine.

Lynlee was removed from her mother’s womb (when the mother was 23-weeks pregnant) so that doctors can successfully remove a tumour – sacrococcygeal teratoma – from her spine.

She was put back in the womb afterwards.

The tumour  was diverting blood from the foetus, risking a fatal heart failure.

Boemer had originally been expecting twins, but lost one of her babies before the second trimester.

The tumour and the unborn baby were almost the same size by the time the operation was performed. Lynlee was given a 50% chance of survival.

“At 23 weeks, the tumour was shutting her heart down and causing her to go into cardiac failure, so it was a choice of allowing the tumour to take over her body or giving her a chance at life. It was an easy decision for us: We wanted to give her life,” Boemer had told CNN.

Doctor Darrell Cass of Texas Children’s Fetal Centre was one of the team who carried out the surgery.

He said the tumour had been so large that a “huge” incision was required to reach it, leaving the baby “hanging out in the air”.

“Lynlee’s heart virtually stopped during the procedure but a heart specialist kept her alive while most of the tumour was removed,” he added.

A Nigerian doctor, Oluyinka Olutoye, who was a co-surgeon in the operation also told CNN that he had performed the same operation once before, seven years ago, and the girl is “completely normal”.

The team then placed her back in her mother’s womb and sewed her uterus up.

Boemer spent the next 12 weeks on bed-rest, and Lynlee entered the world for the second time on 6 June.

She was born via Caesarean at almost full term, weighing 5Ib and 5oz, and named after both of her grandmothers.

When Lynlee was eight days old, a further operation helped remove the rest of the tumour from her tailbone.

Related Topics:Lynlee Hope
Up Next

The ORÍKÌ Luxury Spa and Personal Grooming Brand is ONE & they are having a Giveaway Just for YOU!