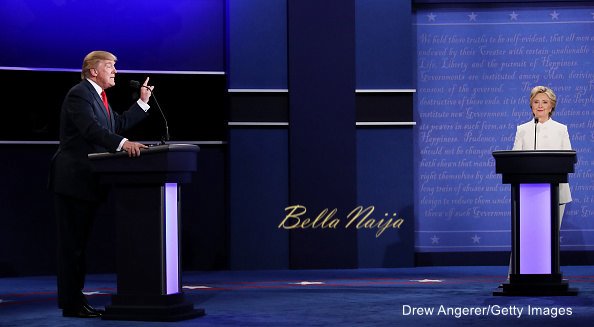 The candidates clashed on almost every issue ranging from refugee to abortion, experience, tax returns, hacking of emails and groping allegation in the debate monitored by the News Agency of Nigeria (NAN).

Clinton accused Trump of promoting external influence of which she particularly mentioned Russian President Vladimir Putin as his personal friend.

According to her, Trump would favour a puppet leader, but said not for America.

On allegations over Russian hacking, Clinton called on Trump to condemn alleged Russian government-linked hacking against her Democratic Party.

“Finally, will Donald Trump admit and condemn that the Russians are doing this?”

Responding, however, Trump accused Clinton of a rhetorical trick, calling the Russia issue “a great pivot off the fact that she wants open borders.”

“She wants open borders,” Trump said. “People are gonna pour into our country,” he said.

Trumped showed that he had little faith in American institutions, American voters and the media. He said that the media has showed a high level of biased reporting.

Trump also made it clear that he won’t commit to accepting election results.

Some viewers interviewed say its damaging  for Trump to feel that the election will not be free and fair.

Comparing her experience with Trump, Clinton said she towered above his opponent.

“In the 1980s, I was working to reform the schools in Arkansas. He was borrowing $14 million from his father to start his businesses.

In the 1990s, I went to Beijing and I said women’s rights are human rights. He insulted a former Miss Universe, Alicia Machado, called her an eating machine.

And on the day when I was in the Situation Room, monitoring the raid that brought Osama bin Laden to justice, he was hosting the ‘Celebrity Apprentice’,” Clinton said.

On groping, Trump denied allegations from a series of women who accuse him of unwanted physical advances over a period of decades.

“Those stories are all totally false,” Trump said. “… I didn’t even apologize to my wife, who’s sitting right here, because I didn’t do anything.”

Clinton, however, brought up Trump’s personal attacks on his accusers and others.

“Donald thinks belittling women makes him bigger. He goes after their dignity, their self worth, and I don’t think there’s a woman anywhere who doesn’t know what that feels like,” Clinton said.

On tax, Clinton also made a dig at Trump over his failure to release his tax returns.

Clinton also attacked Trump over his accusation that Syrian refugees could be a “Trojan Horse”.

“The killer of the dozens of people at the nightclub in Orlando, the Pulse nightclub, was born in Queens, the same place Donald was born. So let’s be clear about what the threat is and how we are best going to be able to meet it.”

Trump also promised to do more for the African-Americans than his rival Democratic presidential candidate Hillary Clinton could do in her lifetime.

Trump claimed that Clinton and President Barack Obama had not made much impact on them.

Trump, however, stressed that his administration would not take care of illegal immigrants or their debts.

He cautioned against voting for Clinton, saying a vote for her is a vote for the continuation of Obama’s administration.

He claimed that America “has been depleted militarily adding, our policemen and women are disrespected; we need law and order but we need justice too”.

“We’re going to make America strong again. We’ll make America great again, and it has to start now. We cannot take four more years of Barack Obama and that is what you get when you get her,” he said.

In her remarks at the debate, Clinton pledged to reach out to all Americans irrespective of their affiliations.

“I would like to say to everyone watching that I’m reaching out to all Americans, Democrats, Republicans and independents because we need everyone to help make our country what it should be.

“I know that we have the awesome responsibility of protecting our country and incredible opportunity of working to try to make life better for all of you,” she said.

According to her, she has made the cause of children and families the centre of mission of her life’s work adding, “that’s what my mission will be in the presidency”.

“I will stand up for families against powerful interests, against corporations, I will do everything I can to make sure you have good jobs with rising income,” she said.

The Democratic candidate also pledged to ensure that America children had better education.

Trump had during the debate, pledged to cut taxes and focus on growing the economy.

Clinton, however, disagreed with Trump, saying that “we need to put more money in social security trust fund”.

“We will make sure we have sufficient resources and that will mean raising the cap… I want to raise health benefits for women. If Trump repeals the America healthcare, healthcare will get worse…,” she said.

Trump also said he would wait to decide whether the outcome of the November 8 U.S. presidential election was legitimate before accepting it.

He alleged that the election was being rigged against him.

“I will look at it at the time. I’m not looking at it now. I will tell you at the time, I will keep you in suspense,” he said, leaving open the possibility that he will challenge the outcome if he loses.

His opponent Clinton, however, condemned Trump’s position, citing instances that Trump always declared that the results were rigged whenever things did not go his way.

“Let’s be clear about what he is saying and what that means: He is denigrating, he is talking down our democracy. And I for one am appalled that someone who is the nominee for one of our two major parties would take that position,” Clinton said.

Trump had repeatedly claimed this week that the election would be rigged against him, alleging voter fraud and media corruption and bias.

NAN reports that the third debate was adjudged the most controversial as Trump accused the media of biased coverage and poisoning the minds of American voters.