Woman abducted as a Newborn Found 18 years After | "My mother is no felon," She says in Defence of Abductor

Kamiyah as a baby (Composite image) and Gloria

A 51-year-old woman, Gloria Williams has been arrested by police in Jacksonville, Florida after her 18-year-old daughter ends up being the stolen baby from Jacksonville’s University Medical Center back in 1998.

Kamiyah Mobley was only 8 hours old when she was abducted, and she had always believed Gloria to be her biological mother.

Until now, Kamiyah was known as Alexis Manigo, the name Gloria had given.

At the time of Kamiyah’s disappearance, hospital CCTV footage was too grainy to identify the kidnapper. There were no photographs of the child so police produced a composite image.

Gloria has been charged with kidnapping.

For 18 years, a composite sketch was the only image of Kamiyah the family had.

Kamiyah’s family has been keeping hope alive for the last 18 years that she would be found alive. The woman who stole her posed as a nurse as part of her operation to steal the newborn.

Kamiyah’s mother, Shanara Mobley said Gloria said she was a nurse when she entered her hospital room. She claims that Gloria proceeded to examine the baby before telling her she had a fever and would need to be taken for a “thorough exam.”

DNA testing has revealed that Kamiya is Shanara’s child.

Gloria took the baby out and disappeared.

For 18 years, a composite sketch was the only image of #KamiyahMobley. The case was heartbreaking and she was never seen again…until now. pic.twitter.com/yGrfOgmaWJ

Jacksonville police says that the family has been informed of the news. “It is up to the victim on how contact will be made. The victim is now an adult.”

Jacksonville Sheriff Mike Williams said: “She had an idea that something may have occurred but… imagine her trying to process this. She was abducted as a newborn and needs time to process this… We want to respect her privacy and we ask that you do too.”

However, Kamiya has come out to defend Gloria, saying: “My mom’s no felon” 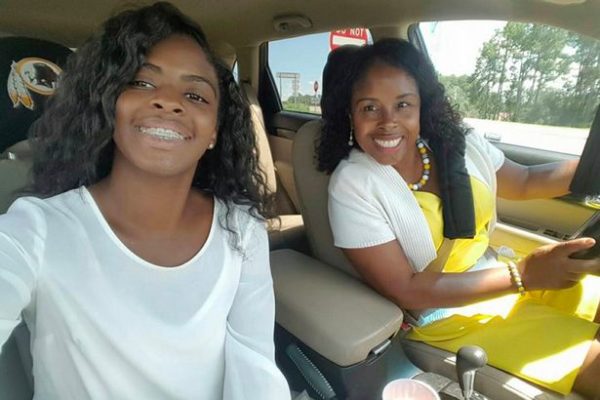 When Gloria was taken into custody, the pair shared an emotional goodbye, with Kamiya sobbing “Momma” and pushing her fingers through a security window.

Later in court, Williams blew a kiss to Kamiya who was in the public gallery.

The teenager responded by shouting: “I love you mom!”

In a Facebook post Kamiya (still using the name Alexis Kelli Manigo) added: “My mother raised me with everything I needed and most of all everything I wanted. The ignorant ones won’t understand it. My mother is no felon.”

Must Watch! Gov. Ajimobi of Oyo tells Protesting LAUTECH Students, “Go and do your worst!”