"Any leader who is tweeting policy is ridiculous" - The Daily Show's Trevor Noah speaks on Donald Trump, racism & apartheid, and his debut book "Born a crime" | WATCH 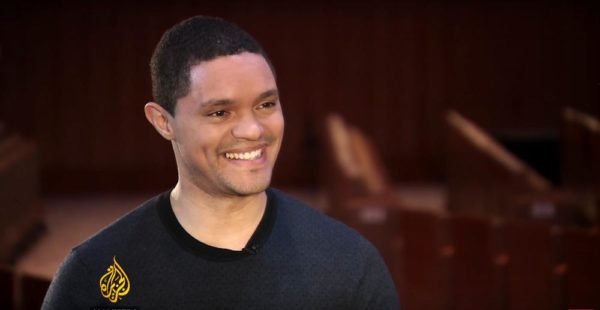 The Daily Show host Trevor Noah joined Talk To Al Jazeera on Saturday, one day after his autobiography, Born a Crime, won the Debut Author and Outstanding Biography/Autobiography prizes at the NAACP Image Awards.

Talk to Al Jazeera’s Dareen Abughaida started by asking about Noah’s recent comment relating current events in the US to what he has already lived through in his life.

In response, the comedian expressed concern that a culture of segregation and oppression is brewing under President Donald Trump.

“He is proud to put forth a white nationalist agenda that is becoming more and more something that a lot of Americans are excited about – but more Americans are not, which is the one beacon, the light you have to keep aiming towards.”

“It’s actually frightening to see how quickly you can repeat the ills of the past when enough people are afraid and hungry – and those are two things that if you combine them and use them in the right way you can get people to commit the most heinous crimes against each other,” he added.

When asked about Trump’s stated strategy to strengthen libel laws, Noah called it “a scary place to be in” but added, “The closer you get to censorship, the more comedy thrives. Freedom of speech is something that people pursue regardless of the laws. As human beings, we want to speak our minds, whether it’s whispered in back alleys or proclaimed from a pulpit. As human beings, we want to tell the truth about what we see. Dick Gregory… once said to me, ‘The truth is way funnier than any joke you can try to concoct.’ So essentially it doesn’t become harder, because as a comedian I just tell more of the truth.”

Among other criticisms, he called Trump “somebody who is all about themselves,” adding, “Donald Trump spent the first day of Black History month speaking about himself and how well he has been doing and his contribution, as opposed to what the month is supposed to be about…”

He added, “People always say, ‘What would you have done if you were around when Hitler was coming up?’ And everyone has theories. Now we’re in a time when there is someone who is presenting the same rhetoric, who is discrediting democracy, who is saying there are imaginary voters and a rigged election. Where does that lead? The question I always ask myself is: If Donald Trump acts like this when he has won an election, how will he act when he loses an election?”

On the topic of whether the media has contributed to Trump’s rise through the free exposure they have given him, Noah said there was a distinct difference between unchallenged platforms and critiques of current affairs. “It’s one thing to have Donald Trump on TV saying something and criticize that, call him out and fact-check him, dispel myths,” he said. “It’s another thing to put his podium on TV for two hours before he comes out, an empty podium … what are you doing? You’re giving the man free promotion…  As a comedy show, your job is to look for the truth, find the laughter and speak truth to power. Donald Trump will always be somebody that The Daily Show is looking at, as long as he is involved in the realm of politics.”

Speaking about Trump’s fondness for Twitter, he said, “Trump today is having conversations on a platform where he genuinely shouldn’t be. Any leader who is tweeting policy is ridiculous.”

He also speaks about being the target of racist tweets. “That’s social media. I feel like if you’re on social media, you’ll be the target of racist tweets. I always tell people, ‘Man, I come from a country where racism meant teargas and dogs and rubber bullets.’ So someone saying something to me online is really the most timid form of racism I have come across in a long time.”

Discussing his newly released book, Born a Crime, Noah credits his upbringing with sheltering him from the potentially jarring trauma of experiencing the true meaning of being considered a product of illegal activity by his own government and people.

“I did not know. I couldn’t live with my father, but I did not know why. I could not walk with my mother in the streets at times, but I did not know why,” he says. “The perception of your reality is everything. That’s what I believe. What we perceive is often times more important than what is real. When I was older, I realised how many obstacles they had to get over just for us to exist as a family.”

BellaNaija’s got a Valentine gift for you! Here’s how to win a FREE ticket to attend the “Money: What’s love got to do with it?” Seminar with Nimi Akinkugbe & Ibiai Ani