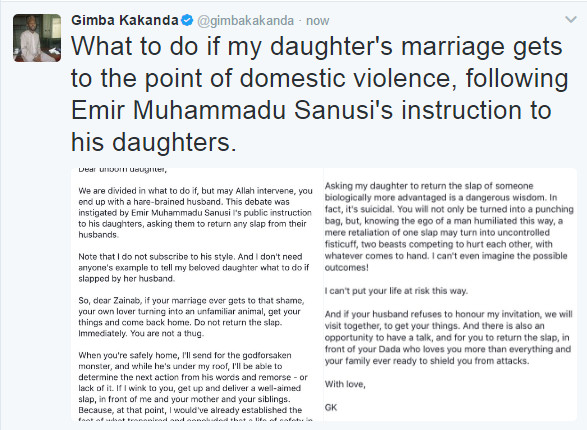 Twitter user Gimba Kakanda (@gimbakakanda) has written an interesting article, detailing how he will respond if his daughter is a victim of domestic violence.

“What to do if my daughter’s marriage gets to the point of domestic violence, following Emir Muhammadu Sanusi II‘s instruction to his daughters,” Gimba wrote as he shared a screenshot of the post originally published on his Facebook page.

We are divided in what to do if, but may Allah intervene, you end up with a hare-brained husband. This debate was instigated by Emir Muhammadu Sanusi II’s public instruction to his daughters, asking them to return any slap from their husbands.

Note that I do not subscribe to his style. And I don’t need anyone’s example to tell my beloved daughter what to do if slapped by her husband.

So, dear Zainab, if your marriage ever gets to that shame, your own lover turning into an unfamiliar animal, get your things and come back home. Do not return the slap. Immediately. You are not a thug.

When you’re safely home, I’ll send for the godforsaken monster, and while he’s under my roof, I’ll be able to determine the next action from his words and remorse – or lack of it. If I wink to you, get up and deliver a well-aimed slap, in front of me and your mother and your siblings. Because, at that point, I would’ve already established the fact of what transpired and concluded that a life of safety in your father’s house is millionfold more valuable than an unhappy marriage.

Asking my daughter to return the slap of someone biologically more advantaged is a dangerous wisdom. In fact, it’s suicidal. You will not only be turned into a punching bag, but, knowing the ego of a man humiliated this way, a mere retaliation of one slap may turn into uncontrolled fisticuff, two beasts competing to hurt each other, with whatever comes to hand. I can’t even imagine the possible outcomes!

I can’t put your life at risk this way.

And if your husband refuses to honour my invitation, we will visit together, to get your things. And there is also an opportunity to have a talk, and for you to return the slap, in front of your Dada who loves you more than everything and your family ever ready to shield you from attacks.

Mo Ibrahim Prize gets no Winner the Second year Running