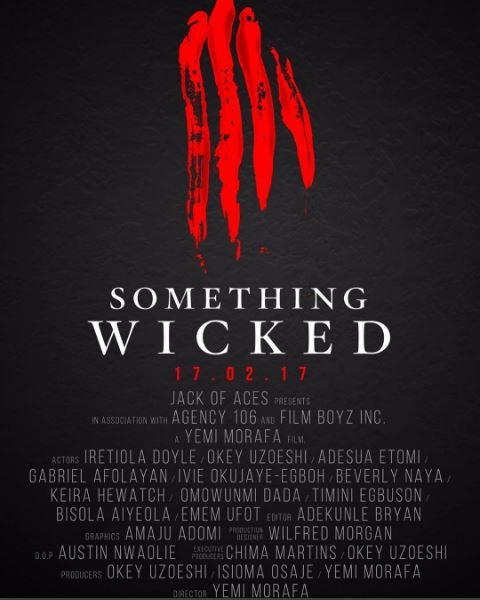 We join the story as a bald man (Uzoeshi looking either in pain or constipated) knocks ominuously on a door. He’s under a downpour and it’s nighttime. Scary stuff. He’s taken in by a family of three children Rebecca (Beverly Naya), Mai (Ivie Okujaye) and Aliyu (Gabriel Afolayan). The head of the house is a widow played by Ireti Doyle, who we come to learn is baldie’s relation. She is considering selling the house to take care of a business concern. Unlike many a Doyle character, this one is likable.

Her kids aren’t so likable. Aliyu is a foul-mouthed young man. Rebecca is a paranoiac girl in love with a cheating boyfriend played ineffectively by Timini Egbuson, with whom Naya has no discernible chemistry. Mai doesn’t speak; Ivie plays her a little too strenuously, as though cuteness compensates for sensory loss. To different degrees all three react vigorously to the new guy. He, on the other hand, is shown mostly quiet and washing dishes.

From this seeming mundane set-up, which takes too long to get anywhere, Something Wicked heads towards a barnstorming scene, which is exciting and frightening. Someone goes missing. Bodies pile up. And although it is almost immediately clear who is responsible for these crimes, there’s some satisfaction to the gripping finale. Unfortunately, the very last piece of this finale and film is disappointing.

The thriller/horror genre can either produce its effect from conjuring shocking episodes out of the barebones of the everyday or appeal to the supernatural. Both require some suspension of disbelief; only the latter demands, on occasion, for some level of religious belief for full impact. Because Nollywood has barely escaped the religiosity of its home country, many of its scarier films fall into the second category. Films like Living in Bondage or Rituals from the early/mid Nollywood may yet be frightening to atheists, but these films benefited from catering primarily to an audience that believes it is possible to convert pints of blood to bundles of cash. With the recent infusion of university educated, ultra-westernised filmmaking blood into Nollywood, it stands to reason that that other category will come to receive some attention.

One way of telling on which side this film belongs is to look at the title. “Something Wicked” is an abbreviation of “Something wicked this way comes,” a line taken from Shakespeare’s Macbeth. It was first used as a title by the American writer Ray Bradbury in a novel; the book was then adapted into a movie by Disney. Bradbury’s story influenced major American writers including Stephen King and Neil Gaiman, both of whom have quite the following in Nigeria.

Perhaps it is because of this history that Something Wicked is set in a middle-class area of Lagos. Maybe it is tricky to transfer such foreign references to a lower-class neighbourhood. While this robs Something Wicked of a gritty edge, it gives the viewer a sense that evil can find a place in the brightly lit mansions of the wealthy.

The film uses an impressively mobile camera. Some of the film’s best shots are new to Nollywood but a lot of this invention has been in use since Hitchcock’s Hollywood.

For all of its novelty and blood and twisted limbs in its wake, Something Wicked decides on an ending long abandoned by filmmakers the world over. To say what this is, is to give away something the makers want to keep. That it so easy to spoil, however, is proof of the weakness of the twist. Suffice to say there was the chance for Something Wicked to end on a really shocking note. But the filmmakers were too craven.

As it turns out, both the spiritual and the everyday horror films of Nollywood have one thing in common: neither of them can imagine anything outside of a happy ending.

The short film Bariga Sugar is to some degree the antithesis of Something Wicked. For one, while the feature film is set in a middle-class neighbourhood, this short film is set in a rundown ‘hood. In both films, as in life, money is a concern. While Doyle’s matriarch seeks millions to save her business, the women in Bariga Sugar use their bodies for a rather meagre income. It also ends on a different note from Something Wicked.

The story follows a mother and her daughter who have just arrived the ‘hood, where they are introduced to a number of clients and prostitutes. The daughter is our guide. She sees just the one difference between herself and her mum: Her mum has several friends; she has none. It is the film’s most poignant line in how it establishes innocence: the adult viewer knows those aren’t really friends of the lady.

In any case, the little girl does get a friend, a boy-  who, like many boys, hurts the girl he likes. She can’t read. He can and makes fun of her inability. This is a vital difference: already he knows he’s better than she is just by knowing how to read. She’s however more human. Their later friendship is heartwarming. But the film’s director, Ifeoma Chukwuogo, is waiting for the right moment to stick a knife into that heart.

A run through the film’s concerns gives the impression that this is goodwill filmmaking by the numbers. Prostitution, literacy, female empowerment are all broached. Fortunately, these are rendered subservient to a story that foregrounds a child’s humanity. Anchored by performances by two youngster leads, when Bariga Sugar succeeds as it mostly does, it gives the impression that if a filmmaker can find the right cast, character and location, she just might find her story.

The performances are uneven as there are times, kids being kids, the younger actors aren’t helped by weaker portions of the script. Also, the use of a woman from Edo state as brothel madam teeters on the edge of cliché. Still, Bariga Sugar makes for good viewing in its less than a half-hour duration. Besides a superb editing between scenes in the film’s first half, Chukwugo’s main accomplishment comes at the end. While her film flirts with sentimentality, she stays true to her material by giving it the only ending that is both right for the narrative as well as its real life setting.

That ending might make you consider the title again. What exactly is “sugar” doing there? With the contrast between title and denouement, Chukwugo achieves a courageous kind of inverted poetry. It should be a worthy wait to have her, when she’s ready, go to the big screen.

“For her to let people know that they’re not alone, I think was really powerful” – John Legend Speaks on Chrissy Teigen opening up about Postpartum Depression