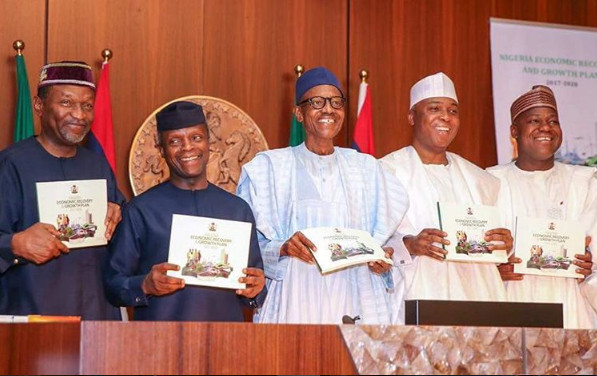 Nigeria has unveiled its Economic Recovery and Growth Plan (ERGP) containing strategies to bail the country out of recession and spur growth and prosperity.

President Muhammadu Buhari launched the document in Abuja on Wednesday almost two years after he assumed office as new President of Nigeria.

The plan which is the brainchild of the Ministry of Budget and National Planning contained 60 critical initiatives expected to help get Nigeria out of recession and reposition on the path of growth.

Some of the initiatives included stabilising macroeconomic, energy infrastructure and driving industrialisation.

Speaking at the brief ceremony that preceded the meeting of the Federal Executive Council, FEC, Buhari said that his government was determined to turn Nigeria from a consumer nation to a producing one.

“We are determined to change Nigeria from a consumer nation to a producing nation”, he said.

The Minister of Budget and National Planning, Udo Udoma, in his welcome address said that the initiative was in line with the change agenda of the government to revive the ailing economy.

“This is, therefore, a fulfilment to re-invigorate the economy”, he said.

Senate President Bukola Saraki, the Speaker of the House of Representatives, Yakubu Dogara and the Chairman of the Nigerian Governors Forum (NGF) and Governor of Zamfara State, Abdulaziz Yari, lauded the initiative.

Meanwhile, some financial experts have expressed optimism that there would be increased liquidity in the capital market in the second quarter of this year if the plan is stepped up for quick implementation.

They said that the sustained economic recovery measures of the Federal Government would impact positively on the market this quarter.

Dr Uche Uwaleke, the Head of Banking and Finance Department in Nasarawa State University, Keffi, said that the market would witness enhanced liquidity during the period with the appreciation of the naira.

Uwaleke said that the lower inflation rate and the expected passage of the 2017 budget would also help to boost liquidity in the stock market.

“For the equities market, the year-to-date return currently stands at a negative of 5.96 percent. However, for the second quarter of 2017, I expect a positive turnaround in the fortunes of the stock market, ” he said.

Sewa Wusu, the Head of Research at SCM Capital, said that investors were still exhibiting negative sentiments because of the current poor macroeconomic environment in the country.

Wusu said that the market outlook looked positive in the second quarter in view of the recent economic recovery measures of government.

Hogan-Ekpo, the Director General, West African Institute for Financial and Economic Management (WAIFEM) in Lagos, made the call while delivering a convocation lecture at Bayero University Kano.

“The government has launched the Economic Recovery and Growth Plan which if properly implemented will enable the economy to exit the current recession, while the growth component will ensure an average growth rate of 4.5 percent from 2017 to 2020,” he said

According to him, there is an urgent need for the Federal Government to adhere strictly to the plan if the economy is to get out of the recession.

He also stressed the need for government to invest in infrastructure, particularly in power, roads, railways and housing, among others.

“In a recession, recurrent expenditure, mostly personnel cost, will stimulate aggregate demand; sub-national governments owe salaries and allowances to workers, the sooner these workers are paid, the better for the economy”.

He’s a Survivor! Man celebrates the 4th Year Anniversary of Surviving an Accident that claimed over 80 Lives on Benin-Ore Road