Mrs Kush: The Things That Happen When You Cook with Too Much Pepper 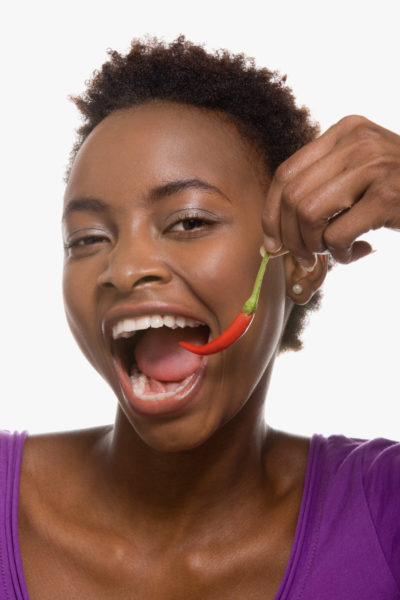 We all know that one person that has an abnormal love for spicy food. I mean most Nigerians like a bit of heat in their food to satisfy their “black man blood”. But there is a special breed of Nigerians that have acid in their mouths, in place of saliva. That is the only logical explanation for the abnormal quantity of pepper they consume and claim to love.
If you are a pepper connoisseur and your friends have started acting funny around you, I’m sure you can relate to the following:

They have stopped eating your food
After tasting your culinary creations a few times, they have concluded that hunger is a better alternative. It’s almost like you are punishing them for eating your food, so that have decided to kuku leave your food for you.

As a loving friend, you have decided to sacrifice you pepper taste for them
Even when you make an effort to reduce the pepper, they will still not eat because your “pepper meter” is broken. Like I always say, 50% off a rip off is still a rip off; the same applies to excessive pepper.

The people who have stopped eating your food, have also stopped giving you food
Cooking for you is a labour of… nope, it’s just labour. You always complain that the pepper is not enough. You have even gone into their kitchen to add ata gun gun (ground pepper) to your meal. They feel that you see their food as not delicious, because it doesn’t meet your standards of pepper. To you, it actually isn’t.

You have cancelled a whole meal you’ve been planning because there isn’t enough pepper
God forbid your Jollof rice actually tastes like rice.

You’ve been tested a few times, but you overcame
One of your friends decided to show you who’s boss and dumped a basket of Mile 12 pepper into your noodles. Even for you the pepper was too much, but your reputation was at stake so you powered through.

The basket of pepper incident was not an isolated event
You’ve actually done this to yourself, several times in fact. You solemnly swear on your flaming tongue you will never do it again. But like Icarus that flew too close to the sun, you can’t help yourself.

After what happened above… multiplied times 10, you begin your path to recovery
When you finally decide that over peppering is in fact a mini form of self-torture, you marvel that regular puff puff actually tastes sweet, and egg has its own distinct flavour.

You’ve finally managed to rehabilitate you mouth
Your pallet is now being reformed and you are gradually working your way back to modern society and sane levels of culinary pepper. You no longer have pepper induced diarrhoea and everything is going on fine.

But…your mother is a Yoruba Woman!
One day you go to your mum’s house and all it takes is one meal. All your de-pepperfying efforts have gone down the drain. You have relapsed to your old pepper ways and this time it’s with a vengeance.

So, to all my pepper friends from far and wide, my name is Mrs Kush and I’m a recovering pepper addict just like you. Yes, you will occasionally mess up and over pepper your stew, but I want you to know that hope is on the horizon; it’s called old age. My mother has experienced it and I myself am beginning to feel the effects. Maybe it’s peculiar to my family… I don’t know, but I seem to be replacing my pepper addiction with something else…Onion Sandwich anyone?

Love,
Mrs Kush.
(I am a food expert and I say this with confidence because I have the waistline to prove it.)

Now That the Honeymoon Is Over! The Transition From Hot Romance to Hot Reality