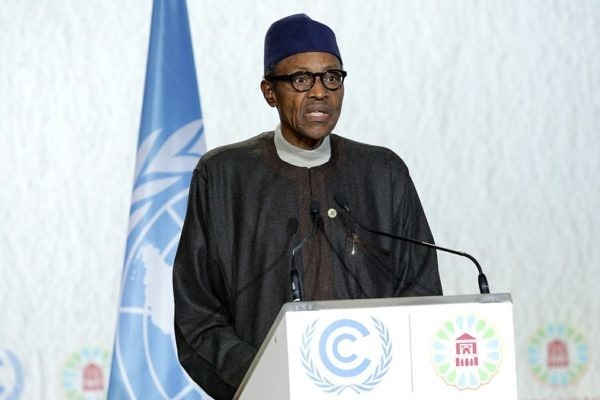 Douglas imagines President Muhammadu Buhari delivering an audio only democracy day speech and mid-term report on his achievements from an undisclosed location in London, United Kingdom.

Fellow Nigerians,
I hope this meets you in great spirits.
Contrary to what my political opponents are telling you, I am in the best health of my life. You might be seeing me going round the United Kingdom in the coming days campaigning for my friend Jeremy Corbyn. I do not understand these white people. Imagine a woman running against this man! The room Theresa May belongs is not in the office of the Prime Minister. You already know well my feelings about women and rooms.

Also, my doctors reckon I can do more about getting out than just campaigning for a man to take his rightful place. I may also be attending the Benefit Concerts in Manchester for the terrorist attack of a few weeks ago.

My children tell me there’s this wonderful artist called Miley Cyrus. She used to sound like us black people, but now she’s changed?
I want to see new things.

Terrible business about that bombing too. Who would have thought it possible in a great country like this? So, Nigeria is even better than these so called first world countries. As you know, we have technically defeated Boko Haram.

And that is why I am here. To remind you of the great achievements that my government has brought to you. Do not believe the inaccurate estimations of those social media people who appear in the offices of my subordinates while you sleep, looking for favours, contracts and appointments. My digital communications team calls them overlords. The only thing they are lording over is their own interests.
I am looking after yours. Now allow me to go ahead and list my achievements.

Freedom of Speech
We freed Audu Maikori. We continue to  allow our former employee, Chude Jideonwo, write against us.
Unlike past administrations, my government has completely changed the face of this fundamental human right.

Citizens are now allowed to say whatever they want: in newspapers, on Twitter, on Facebook. Even when a sitting governor of my party politely invited one of the talkers, Audu Maikori, for some questions, it was all harmless. We released him didn’t we? We allowed him to say his piece. We called him to ask him what he said, then we let him go… to keep talking – even if we may not have liked what he said.

A greater example of our achievements in this field is with media change agent and publicist, Chude Jideonwo who was an employee of my campaign during the elections. After being paid handsomely for his work, he now carries pen to stain the hands that fed him, criticizing me harshly and unkindly, telling me I broke his heart. Years ago, you know such will not be possible. Such articles will be greeted with letter bombs, but I have ensured no such thing happened. Change has come!

We have also made great strides in the creative sector. One of our own, Dino Melaye has published a fantastic book, ‘Antidotes for Corruption’ which we project will sell billions of copies and flush money into the economy and creative industry.

There are wicked rumours that Melaye was caught on tape bribing a judge. What you don’t know is he was undercover, gathering research for his next book. How do you know what corruption is if you don’t test out the practicals. Let’s not be dramatic. Change has come!

Corruption
Recovered money for your president’s care.
We have recovered over $151 million N8 billion looted funds since my administration started our famous whistle blowing policy! Of course, these monies are put to good use for the wellbeing of the nation, by making sure I get the best medical care at world class health facilities here in the United Kingdom. Before, we may not have been able to comfortably afford a Presidential Suite VVVIP private ward for me, but now we can. Change has come!

Corruption Part Two: Justice / Arrests
I know there have been some mumblings as to why the likes of Farouk Lawan, Femi Otedola, Diezani Allison-Maduekwe, Andrew Yakubu, Sambo Dasuki are not behind bars; all whom have been caught in acts of corruption. But what kind of ruler will I be if I don’t temper justice with mercy?
Yes, they stole money. Yes, they bribed. But did they kill anybody? Did they come and take food away from your table?

Let us just let them all go and keep the monies recovered. Change has come!

Douglas is a civil servant but this was not the plan. He convinced his parents to invest their elusive pensions in a private university education. He made sacrifices too. He tucked in every day, wore ties, ate tofu, attended church four times a week, listened to sermons probably drafted on private jets. He even graduated top of his class. At the end of it all the return was supposed to be a great job, regular salaries, workplace oppression by bosses who could actually write a sentence in proper English. But now he is a civil servant. Since the universe didn't keep to its end of its bargain, he won't either. He resumes work at the Secretariat at 11AM, on excellent days. Closes 3.30PM sharp. In between watching Africa Magic And gossiping with Folake in the next office, he writes things like this. You may also find him causing trouble on Twitter at: Tweets by dobetterdouglas