Muideen Owolabi Bakare: Living with Sickle Cell Anaemia is Like Fighting a War

Once upon a time, genotype tests before weddings were not a norm. Because these tests were not taken, it was more common to find two people—usually carriers of the sickle cell gene—getting married and birthing children with full blown sickle cell anaemia (SCA). Our world has changed a bit as more people know their genotypes even as children; however, this knowledge still hasn’t stopped these kinds of union. 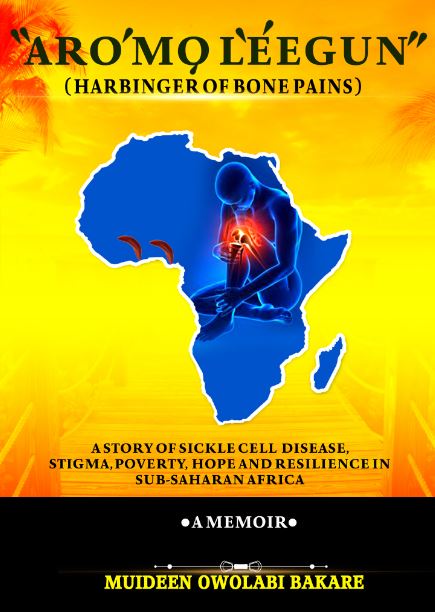 For Muideen Owolabi Bakare, born 1972, at a time when there was little awareness about sickle cell anaemia, the journey was not easy. Currently, as a psychiatry and mental health doctor, he actively seeks to educate the populace about the sickle cell disease. In his memoir titled, Aro’mo L’ėegun” (Harbinger of Bone Pains), he chronicles his experience as a sickler while simplifying scientific aspects of this disease.

Bakare’s parents first noticed his condition when he was nine months, shortly after he started walking. His joints would swell, causing him so much pain that he spent huge chunks of time in hospitals. This trend continued throughout his primary and secondary education, causing his overprotective parents to watch over him like hawks.

His distended belly­—from an enlarged spleen—and a limp from avascular necrosis in his left femur caused him to be ridiculed. The other children called him O-minikun meaning: water-filled abdomen. That, coupled with the fact that he was exempted from a lot of physically exerting tasks, made him feel less of a human. He soon developed an inferiority complex. Luckily, Bakare had a flair for academics so he threw himself into that. He also excelled in extra-curricular activities.

All the time spent in hospitals exposed him to the world of doctors. He was fascinated, told himself he would become a doctor so he could find a cure for his ailment.

Those of us who didn’t study medicine have heard about the course’s intensive workload. I remember someone telling me the clinic in his university was always filled with sick medical students in the weeks leading up to exams. However, as difficult as these periods were for Bakare, he graduated in time.

A memorable (and sad) part of his university experience involves a school doctor asking why he had chosen to study medicine. Didn’t Bakare know that the course was too stressful for a sickler? Why was Bakare wasting funds when he knew he would soon die? Another bout of discouragement came when he tried getting an internship position at the University of Ibadan Teaching Hospital. Apparently, there was an unwritten rule against taking sickle cell patients for housemanship.

I’m ashamed to say I had no idea this kind of stigmatization happened to people living with SCA. I’ve interacted with numerous SCA patients, but the only thing I can say I knew about some of these people was the feeling of being inadequate. Why in heaven’s name is their situation grounds for being disallowed to practice certain careers?

Bakare is one of many SCA patients determined to live despite a lifetime of acquainting himself with hospital staff and native doctors. His foray into psychiatry and mental health was originally a result of being disallowed to study Haematology because it would be too demanding for him. As luck would have it, things worked well and led him to a field which he now believes is the best place for him. He presently pioneers research in neurodevelopmental disability among Sub-Saharan African children with a special focus on Autism spectrum disorder in Africa.

This book helps break down complex terms, giving insight into the most technical details surrounding sickle cell anaemia. I believe many people fail to understand the basics about this disease, so reading this book can help provide a relatable perspective. Bakare also advises SCA patients on better living via good nutrition, psychical exercise, self-education, building a veritable inner-man, and determination.

Muideen Owolabi Bakare has promised that the proceeds generated from the sales of this memoir would be used to provide free medical treatment for indigent children with Sickle Cell disease. To support him you can get a copy of Aro’mo L’ėegun” (Harbinger of Bone Pains) here on the OkadaBooks store.

Chiamaka Onu-Okpara is an editor with experience editing fiction, creative non-fiction, and academic documents (Social Sciences and Humanities). She also writes fiction and poetry and has been published in Ake Review, Apex Magazine, and Kalahari Review amongst other places. Her first poem is forthcoming in Strange Horizons.

Aunty Bella: Miss. Had Sex with a Married Man to Stay in School