HaroldWrites: A Review of Ojay Aito's Book - Night of a Red Moon 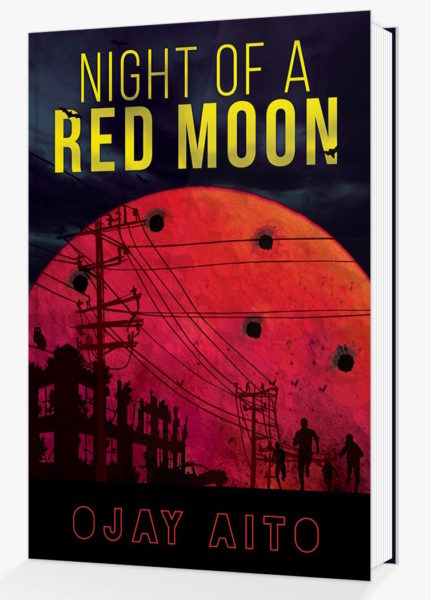 Night of a Red Moon is a 370-page book by author, Ojay Aito. Although, the full length novel looks voluminous, the most fascinating thing about the book resides not in the quantity of its pages, but in the story it tells – the weight of the story it tells.

Night of a Red Moon is a story of the bloody war between the indigenes of a small town known as Ago-Iwoye and the students of the Olabisi Onabanjo University, a tertiary institution in the community. This bloody war sparked off after Femi, a student of the school was gruesomely murdered by the Oodua People’s Congress, a local vigilante group. What had started as a peaceful protest against the aforesaid murder of Femi, later escalated into a small scuffle between the indigenes of the community and the students of the school. In no time, the small scuffle assumed a bloody garb of rife political undertone which left scores dead. It became a full-fledged war. There was unprecedented bloodshed in the land and the only person who could put an end to the war was only but a few hours old. A group of friends were caught in this sudden war which tested their bond of trust, friendship, and loyalty. In their desperate bid to survive and save their loved ones, they were exposed to the dastardly world of cold-blooded murders, rituals, rapes, violence and surreal interference of angels and demons.

Night of a Red Moon is a story of love, friendship, courage, stupidity, greed, violence, providence and the standoff between good and evil. A sober perusal and assimilation of this book exposes one’s mind to an avalanche of questions, top of which are, “how far will you go to do what is right when the odds are evidently against you? Are you willing to tread along a lonely tunnel, knowing full well that the envisaged light at the end is the lamp of the slaughterhouse?”

The author in his “Author’s Note” re-affirms that it is a work of fiction; although the plot of the book may have a semblance with a past real-life event. A simple search on Google using the phrase “June 16, 2005 Ogun State” would reveal something very chilling. The events of June 16, 2005, were truly horrific. Whether the account portrayed in the book, Night of a Red Moon is fact, fiction or faction (a combination of fact and fiction), one thing is certain: Night of a Red Moon is not your everyday work of literature; it is a retelling of a bloody history and a foreboding of the treacherous inhibitions of mankind when pushed overboard.

Night of a Red Moon is such a fantastic read that, a few downsides to the publication were not enough to whittle down the excitement it generates. One of the downsides of the work which I observed is the stretching of certain subplots. I understand the need to tell back stories at some point, but I think some back stories were overly stretched . For example, after Femi was killed, his belongings from school were delivered to his mother. Quite a few pages of the book were dedicated to his mother going through his possessions and stumbling on some old letters he had written. The importance of this aspect in the book was to let the reader know that, Femi found love before he died, but I do not think the poetic content of his letters (which were wholly reproduced) was necessary.

Another area of the book which could have been done differently was the development of romantic love among the characters. The romance between some of the characters came across as forced or rushed. For example, one of the characters, Seun had only just met Kate on the day of the tragic event, yet he felt so much admiration for her that, he staked his life in an attempt to save her.
Another character, Dan, had also only just met Dr. Susan on the night of the tragic event and at a time when the heat was at boiling point, yet he felt so drawn to her and she “reciprocated” the feeling almost immediately. Well, the reason for the romance among the characters can be explained as this element of love was so important for the unity of purpose of the characters.

Further to the above, I spotted a few other errors which can easily be attributed to the printers, and not the author.

Notwithstanding the aforementioned downsides, I believe Night of a Red Moon is a brilliant read. After I was done reading the book, I remember thinking to myself that the non-existence of these downsides would have made the work too perfect and a wise man once said, perfection is boring. The pace of the plot in the book makes up for whatever downside it may have. I dare say that, the author’s style of writing makes this book a worthy contender for a blockbuster motion picture. If you needed any pointers, take a peek at the cover design. I am sure you would agree it looks quite intriguing. But do not judge this book simply by its cover. The gory tales it harbours cut deeper than the Valyrian steel of a Lannister