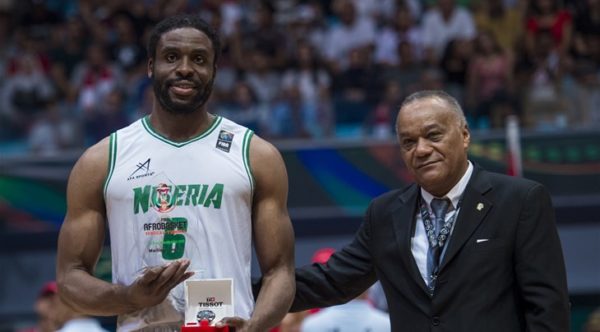 Zied Chennoufi led the way with team-high 19 points in the winning cause.

Meanwhile, 34-year-old Ike Diogu had a game-high 20 points but his effort was not good enough to avoid defeat. The forward recorded a tournament-high 22 points per game and averaged 8.7 rebounds per game at the 16-team FIBA Africa’s most important competition.

He was named the tournament’s Most Valuable Player, headlining the All-Star Five Awards offered by Tissot, where he was joined by Ikenna Iroegbu (Nigeria); Mohamed Hadidane (Tunisia), Mourad El Mabrouk (Tunisia) and Gorgui Dieng(Senegal).

Diogu, who was also been named on the All-Tournament team, was the tournament’s highest scorer with a total of 132 points and was Nigeria’s highest points scorer in four of their six games at the tournament.

Despite minimal time to prepare, D’Tigers put together a great performance at AfroBasket 2017! Thanks to the players & the fans for support! pic.twitter.com/cwior0mRFA

Earlier in the day, Senegal claimed the last spot on the podium, after seeing off Morocco, 73-62, in the 3rd-Place Game.

We are proud of you guys! It was a great tournament.

20 arrested in Tanzania for alleged homosexuality