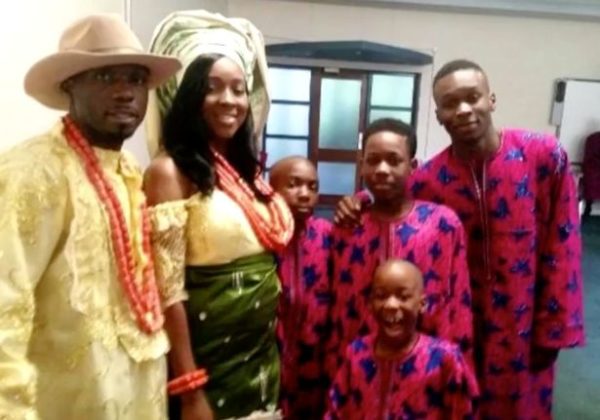 Omena Ubiaro and his family

Friends and family have announced the passing of Omena Ubiaro, 38, a father of five who lost his wife weeks ago to the same illness he was suffering from.

According to Mirror Online, Omena had fought bowel cancer for three years before he died in the early hours of September in a Wolverhampton hospice.

While battling for his life, friends and family launched a GoFundMe campaign to cater for his health and family. Click HERE to donate.

It breaks my heart to report that sadly our dear brother Omena has lost his fight to cancer at the early hours of Monday 4 September 2017.

I would like to offer a heartfelt “THANK YOU” to everyone who have contributed so far financially, with prayers and with words of encouragement.

Unfortunately our worst fears have been confirmed and we now need your donations now more than ever to support the children. No amount is too small as a little streams make mighty Oceans.

His wife Makeda was diagnosed with the disease last August but lost the battle after an emergency surgery on July 29, 2017.

Omena died a day to his wife’s funeral scheduled for September 5, leaving behind five children between the ages of 7 and 19.

Here’s the GoFundMe support video he made before his passing.

The couple met as teenagers at St Francis Xavier College in Clapham, South London. In 2004, they moved to Birmingham after their marriage.

They renewed their vows in August 2015 after Omena was diagnosed of the disease.

You can support the family HERE.

Lookalike hired to stand as Buhari in Nigeria – Nnamdi Kanu