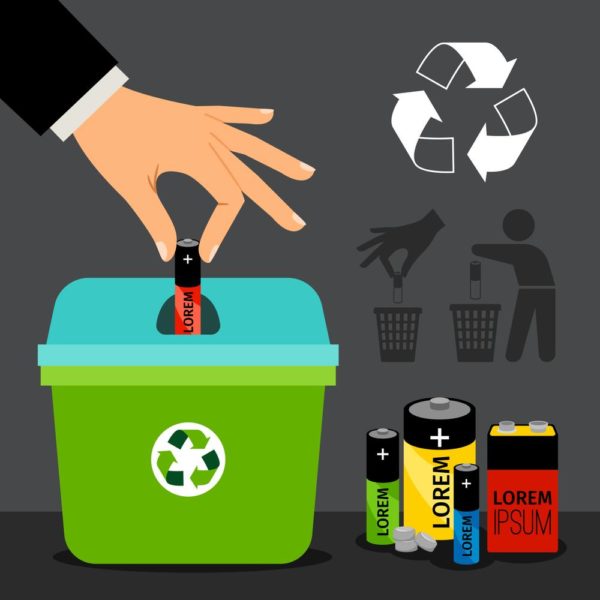 Electronic waste commonly known as E-waste comprises of discarded electrical electronic equipment (EEE) disposed in homes, garages, offices and landfill, discarded without intention for reuse by the owner. EEE are appliances that have a battery or a power cord examples are blenders, computers, game consoles, telephones, printers, batteries etc.

Formal e-waste is known to be found in dumpsites and with recyclers. Informally, homes and offices also contribute to e-waste by accumulating unused electronics. Humans, plants and animals are exposed to heavy metals from e-waste via various means such as ingestion of contaminated water and food, inhalation etc.

According to United Nations Environment Program, an estimated amount of 50 million tonnes of e-waste is produced from electronics industry, which is equivalent to 125,000 jumbo jets (that’s 82 times more than the planes ever built). Just a tonne of e-waste can produce 8,000 mobile phones, 135 desktop computers, 37 televisions and 3,333 computer keyboards. Studies by Breivik et al. 2014 says the tonnes of e-waste may increase to 65.4 million by this year 2017.

Developed parts of the world such as Europe and America, have begun a criminal enterprise of illegally trading and dumping e-waste to underdeveloped countries like Ghana and Nigeria. The dumping of discarded EEE to low and middle-income countries is unregulated, which brings about an increase in e-waste. E-waste is often shipped to countries with weak regulations of the importation of secondhand EEE, Africa and parts of Asia receive about 80% of the world’s e-waste.

In 2016, Christian Purefoy did a research that identified up to five hundred containers of secondhand electronics imported into Nigeria on a monthly basis, and three quarters of the imported EEE are faulty beyond repair.

What is commonly called Second-hand or “Tokunbo” electronics from the developed parts of the world are usually unused or old appliances already discarded in their countries and recycled to Nigerian smugglers for resale. Some of these products have actually been trashed in dumpsites, but are picked up by smugglers and sold at a cheaper price.

Liquid crystal display (LCD) contains mercury, just as circuit boards and cathode ray tube glass contains lead. Chromium, arsenic, cadmium, brominated flame and polychlorinated biphenyls (PCBs) are a few of the harmful materials used in the production of electronics.
When these electronics are left in the environment for a period of time, they begin to leach into the environment, thereby causing emissions which are harmful to the body.

The positive side to e-waste is the potential of recovering valuable metals such as aluminium, gold, silver, copper, iron and rare earth metals, which can be recycled. However, only about 15% of these e-waste are being recycled due to poor recycling process in countries.

E-waste recycling brings about wealth creation and job employment for thousands of people, as individuals go around in search of metal scraps. But this is not without its own issues. The accumulation of e-waste in the environment causes harm to the human health. The International Resource Panel stated in their research, that recycling has been relatively low in recent years, and if care is not taken, we might run out of metals in decades to come.

E-waste is a major health hazard in the environment which leads to various health effects such as:

Alarmingly, children are employed as e-waste recyclers because their small hands make it easy for them to dismantle the parts. Children already have a higher risk of been affected by e-waste in the environment and this act only worsens their state of health.

One can be exposed to e-waste through various routes such as: air, dust,  food, soil and water. E-waste also affects the ecosystem and marine life. Breast feeding mothers, pregnant women and children have a higher vulnerability of getting contaminated.

How to mitigate E-waste in the environment

I hope you learned a few things. Please share any tips you may have on how to properly recycle electronic waste in Nigeria.

#BeInspired Mondays with IK: Play it Back

Adefolake Ayotunde-Salami is currently the Social Safeguard Consultant on a World Bank Assisted Project (SFTAS). She has a B.Sc, M.Sc and hold numerous certifications. She is also an Independent Consultant for top companies in Nigeria and has work experience in Nigeria and the United Kingdom. She is the author of a book on Amazon and Smashwords titled “Functioning In The Knowledge Of Who You Are” and a website (www.adefolakeadekola.com) where she writes articles based on extensive research. She is a Columnist for Bellanaija, Nigeria's biggest blog and she loves to watch series when she is less busy .