Perhaps one of the characteristics of a developing nation is the battling of challenges that may seem archaic to a more informed population. While organisations like The Girl Gen and End Cutting Girls are fighting to put an end to female genital mutilation (FGM), a Facebook user, Alhaji Adebayo, is currently running a “bonanza”, offering to carry out female circumcision for free for 8 days, ending Thursday, January 4th, 2018.

According to the World Health Organization (WHO), FGM comprises all procedures that involve partial or total removal of the external female genitalia, or other injury to the female genital organs for non-medical reasons.

Now, non-medical reasons in this case is cultural, where FGM is believed to increase marriageability by ensuring premarital virginity and marriage fidelity. Why? Because FGM is believed to reduce a woman’s libido, therefore helping her resist pre/extramarital sexual acts.

FGM is rooted in gender inequality, the attempt to police women’s sexuality.

The truth is FGM has no health benefits. It is known to interfere with the natural functions of girls’ and women’s bodies.

It is known to oftentimes result in complications which include: urinary problems, vaginal problems, menstrual problems, sexual problems, increased risk of childbirth difficulty, and even psychological problems. And the list is often longer.

It appears Adebayo, an Accounting & Audit graduate of Kwara State Polytechnic, is widely known for this practice as, photos shared on his page had at least a dozen bystanders watching him cut the girls. The children’s parents probably gave approval for the circumcision, another sad reality. Experts say this practice is common in Osun, Oyo, Ekiti, Kwara, Imo and Ebonyi states.

Adebayo cuts the girls, little girls, in his home in Ajere House, Alapansanpa Compound Alore Area in Kwara State. The little girls are held to the floor by men, a flimsy piece of cloth to cushion their innocent bodies. There is a bucket, into which the blood from the cutting goes.

It is possible that the girls will bleed for days. They have no one to fight for them. Adebayo, as seen on his Facebook, is involved in grassroots politics in his state, Kwara State.

Adebayo, in defence of his practice, claims that he has a foundation that pays for “the hospital bills for those that prefer to do their own (FGM) at the hospital”.

Former President Goodluck Jonathan in 2015 signed into law a federal ban on female genital mutilation. As at 2016, 26 states were yet to ratify it into their state laws.

Evidently, the act is still in practice in the country.

It is necessary that the Federal Government is urged to enforce its laws, and stop the mutilation of the bodies of women. 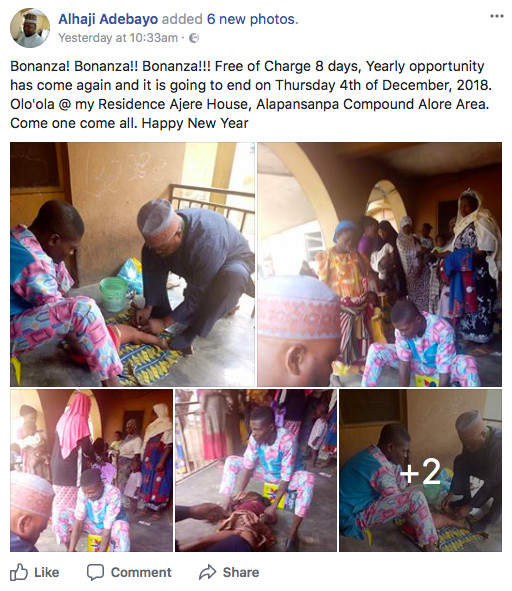 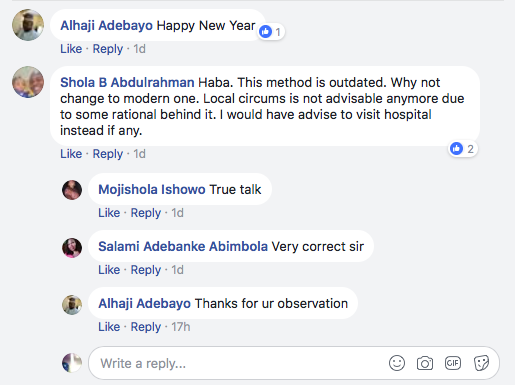 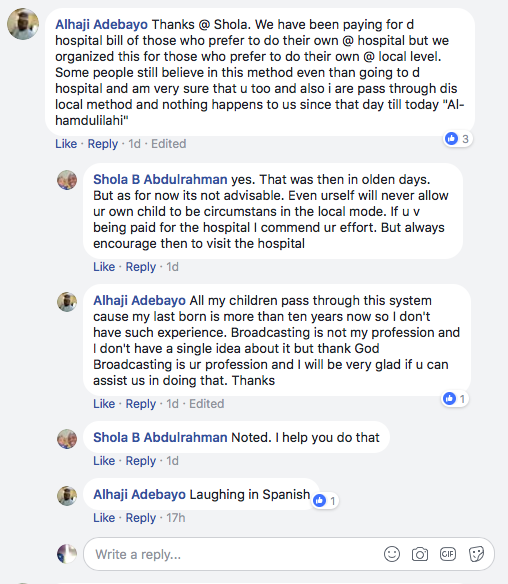 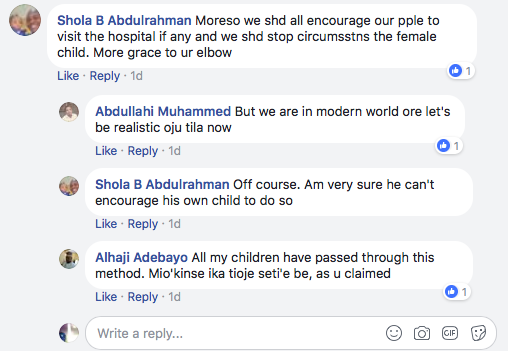 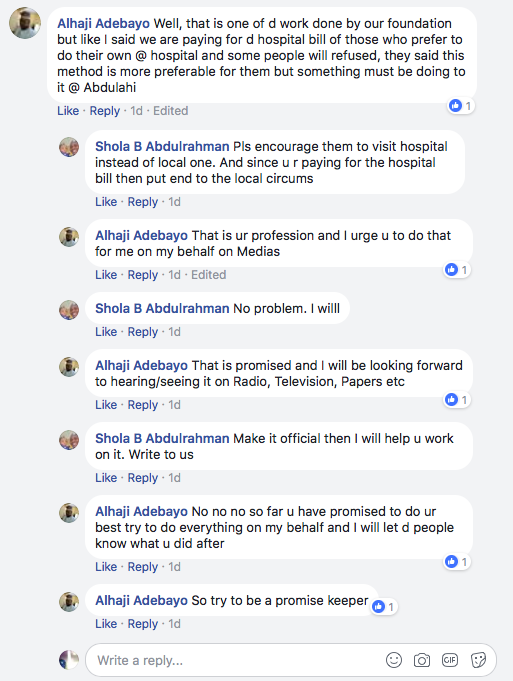 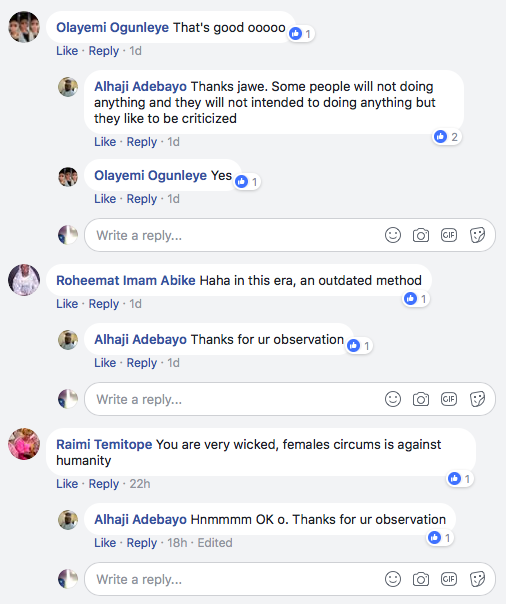 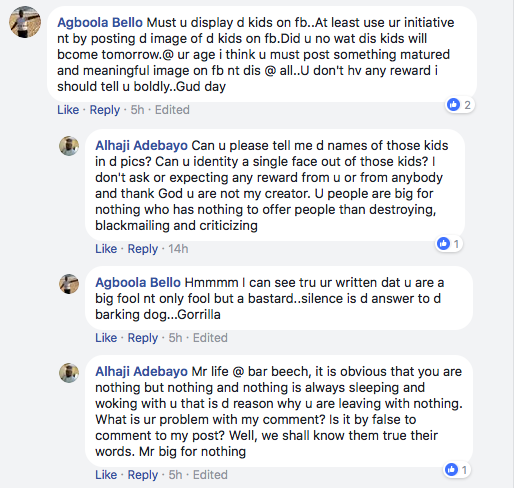 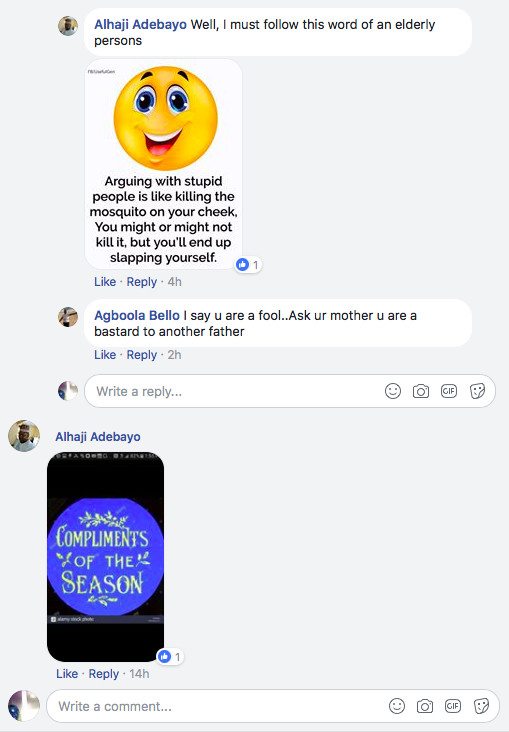 Do you know of any victims? Please contact The Girl Gen or End Cutting Girls  to help them get the necessary help.

We also use this opportunity to call for all state governments to ratify the laws criminalizing this activity and to preserve the fundamental human rights of girls in Nigeria.