Oris Aigbokhaevbolo: Imoh Umoren's Club Attempts to Be Smart But Does Not Quite Succeed 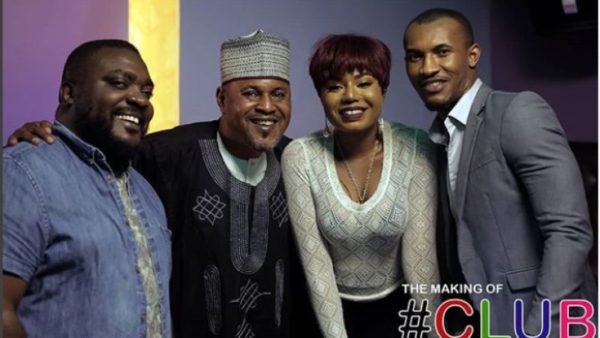 From its dialogue to its plot, Club, as directed Imoh Umoren has a single ambition: it wants to be smart. It doesn’t quite succeed.

The film treats its viewers to a cold open. We see a man tied to a chair being beaten, receiving the standard incompatible-punch-and-grunt of too many Nollywood films. A politician (played by Saheed Balogun) watches. Something about the violence disturbs him. Well, something about the scene’s shoddily enacted violence and rather bad lighting might disturb the viewer.

Because Umoren’s (and Halima Bakene’s script) come back to this scene later, it turns out the lighting might be an aesthetic choice, as the film takes place around a club. But I can’t think of an excuse for the amateurish handling of violence—not after Eric Aghimien produced a decent stab in the belly in 2013’s A Mile from Home.
A voiceover by the actress Nancy Isime is our guide to the film. Isime plays Pam (which seems a nod to Pam Grier, the American actress famous for her roles in Blaxploitation movies of the 1970s.) Usually a good interpreter of roles, Isime, a little rounder than she was in ‘Gidi Blues’, is hopelessly miscast in Club. Not that she is helped by lines that were probably brilliant hilarious upon their Final Draft debut, but should never be spoken by anyone with a pulse.

The film’s trailer had provided warning, given that risible scene where Isime laughs and says something about bringing a knife to a gun fight: “so cliché”. This scene takes place in a club with bouncers and we are never satisfactorily told how the knife was snuck in. There are many similar incredible turns and wacky lines in the film. Some work, but way too many are clearly the result of a brand of lazy writing that thinks cheek is always its own virtue. Club is camp that doesn’t quite know it is supposed to be camp. It is a bit of a marvel how Isime, whose face seems swollen throughout the film, continued to wrap her mouth around some of her lines.

In any case, Pam is in charge of the club but needs a few millions to treat her sick father. She asks her cartoonish, wise-cracking boss, but gets blown off. At some point during the film, the man asks the apparently celibate Pam, grin in his eye, “When last did you have some nuts?” and then he adds: “Groundnuts”. An early scene has Isime say “she works her ass off” as the camera holds onto her ample bum in a visual pun. In Umoren’s mind, cleverness is next to godliness.

Pam tells us she has a plan and not long after a dead body turns up at the club when a politician is around. Who did it? To be honest, no one should care. Too little is at stake. But the film continues. The body belongs to a supposedly ravishing stripper, who is filmed so bad she is more shell-of-her-self than bombshell. Her irate boyfriend is a suspect, as is a drug selling guy with a grudge against Pam.

These suspects give their self-serving versions of the event. This harks back to Rashomon, Kurosawa’s 1950 adaptation of a Ryunosoke Akutagawa’s short story, but lacks that story’s understanding of human motives. The viewer might care to think that the truth is maybe to be found somewhere within the cluster of tales told to Pam, but the bigger truth is that Umoren’s Club doesn’t earn that thought.

Cut your losses: You gave the film your ticket money; don’t give it your care.

Watch the trailer for Club here:

Dr. Folashade Alli: What You Need to Know About Stroke

Tunji Andrews: Looking to Return to Nigeria as an Entrepreneur? Here’s the Undiluted Truth