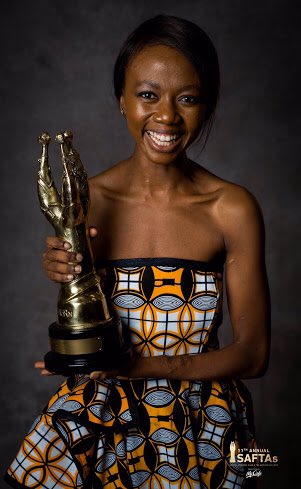 South African actress Shoki Mokgapa is dead. According TshisaLIVE, the 34-year-old Intersexions star passed away on Tuesday night from a yet to be confirmed cause.

Following her shocking death, South Africans have taken to social media to mourn the vibrant actress who won a SAFTA award in 2017 for Best Actress in a Feature Film.

We are extremely sad to hear about the passing of Shoki Mokgapa. Everyone here at CMP loved working with her and she will be greatly missed. Our thoughts and prayers are with her family at this time. pic.twitter.com/wtFCDEiAs3

South Africa has lost another Award Winning Actress again Shoki Mokgapa Rest in Peace my sister. Your talent was on another level. ????? pic.twitter.com/luJNIG1WSS

@SAGActors is shocked at the loss of @ShokiMokgapa. This talented award winning actress will be sorely missed in the acting community. Condolences to her family, a tragedy indeed when such a light is lost. pic.twitter.com/1GuqWdJ4Md

Saddened by the passing of Shoki Mokgapa. An absolute ball of fire and talent that you could never deny. My deepest condolences to her family and close friends. #RIPShokiMokgapa #RipShoki pic.twitter.com/QKlbHP7Nwm

Beverly Osu is Pretty in Pink for 26th Birthday Photoshoot ?