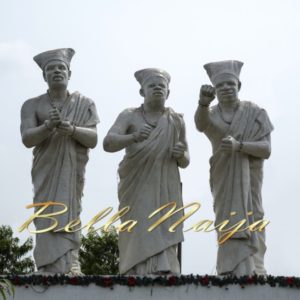 Asides its geographical virtues, the infrastructures that define Lagos as a state of great comeliness that it is today were not created by God, neither were they a product of the big bang.

Sometime in May, a heated debate on Facebook Nigeria ensued between the residents/enthusiasts of Lagos and those of Abuja. While Lagosians described Abuja as spoilt, entitled, and privileged, the Abuja residents spotting the Achilles heel―the congestion, traffic, and stress of Lagos―went for the kill. The debate ended with a poll where only twenty-seven percent of participants agreed to live in Lagos in an event that they could get all that Lagos offered to them from another city, say Abuja. (It is worthy to note that this poll was carried out by an Abuja resident, Bibian Pius-Urum). The Lagosians, not succumbing to defeat, taunted the Abuja folks as people with no good gibing content, who had to resort to singing same old song until it had become hackneyed.

Eby Pius-Urum, a fashion designer and a caterer who had her thriving business in Lagos even referred to the traffic and stress as “…the sauce.” “Laye! Lagos will loose it’s (sic) taste without the traffic,” she wrote. But amused spectators, like me, would see this as a lame excuse; a pitiful case of one denying one’s problem. Besides, it is funny how one, particularly an inhabitant of Lagos, would refer to Abuja as privileged. The statement, though factual, is an embodiment of the trite expression of pot calling kettle black.

Lagos is a history of political privileges and attention. Lagos was among the first (if not the first) cities occupied by the whites when they came into the geographical expanse now known as Nigeria. The city was even christened by the Portuguese who were the first Europeans to visit the settlement. The whites revamped the land, providing it with virtually everything―ports (both air and sea), good road network, electricity, water, etc. And after the amalgamation of 1914, Lagos would go ahead to become the capital of the country for almost eight decades. If Lagos was human, it would be that over pampered child that had been showered with so much love and attention right from birth.

Although the capital of Nigeria in 1991 was moved to Abuja, Lagos still remains the capital of all sectors in Nigeria―business and finance, entertainment, literature, information technology, even religion. Having inherited prodigious financial history and political attention―the bait it has used to lure people to itself―the city has become a hothouse for money, one constantly choked by a horde of hustlers – a place of urgency and din.

Although, ethnically dominated by Yorubas, Lagos enjoys a sort of de-centralization and de-tribalization. The World Population Review stated that there are more than 250 ethnic groups represented in Lagos. And with Nigeria having a total of 250 ethnic groups, one could logically assert that Lagos is Nigeria—a melting pot of cultures; a rainbow state.

People who live in Lagos are usually assertive and quick-witted, which I believe is a good thing. But these traits are more of survival instincts than they are innate. My friend, Samuel Sulemanu, had said to me twice, “they will sell you easily in Lagos.” He said this because he believed that I exhibit a tropism towards trust; that I am too quick to believe people. Traits one shouldn’t possess in Lagos. While this may be true, it is also worrisome that the people who live in Lagos have grown comfortably with insecurity; have become wary of performing or receiving good deeds; have worn paranoia like an armour.

Apart from these, people outside Lagos, especially new graduates and recent ex corps members, are being financially bullied into Lagos. Recently, I received a call from my mother. She told me of a job offer: a firm was in need of a pharmacist, salary was attractive, but firm is in Lagos. I heaved in exasperation because every time I had sought for a high-income job, I was always referred to this city. To get real money one has to be there. In cities like Enugu (the acclaimed Eastern capital which I love and also look forward to settle in), one would receive the crumbs that have fallen off Lagos’ table. This is disturbing!

So I took to Facebook to ask a question: Why are all the good job opportunities located in Lagos? There was a myriad of answers and reactions to this question. Some people said that the major attraction to Lagos are the sea ports. A commenter, Charles Jaja-Sackey, a Nigerian based in the United Kingdom said that it is not so easy establishing ports in other states like Cross-River and Rivers. “You can’t open ports in other states,” Charles started. “It’s not that straightforward: You need natural harbours that would allow ships, otherwise you’d be stuck with spending extra resources in extended continuous dredging, and additional expenses in operations because smaller ships would have to go into sea to help offload larger ships. It’s pointless. We have a thriving port in Lagos, we just need to expand it.”

While this argument may have some validity to it, it doesn’t erase the fact that not all companies or organizations that have situated their headquarters in Lagos need the sea ports. Ports are mainly required for export and import. I am a pharmacist. Pharmacy is a profession with diverse areas, but of all these areas only industrial pharmacies and community pharmacies involved in wholesales would require ports. Yet, a huge percentage of highly remunerative community pharmacies are littered around the Lagos metropolis. Every year, hundreds of inducted pharmacists pour into the city to find lucrative organizations for internship, NYSC or post-NYSC placement.

Aside being a pharmacist, I write. And there is this gnawing pain that I feel when literary festivals and workshops are constantly held in Lagos. Do writers make use of ports too? Aren’t there writers in Enugu, Asaba, Minna, Kaduna, Benin, Calabar, Lokoja who can benefit from these festivals and workshops without having to travel long distances? Why make writers yearn with envy at literary opportunities readily available to their Lagos counterparts?

Or should we talk about the numerous churches littered all around the city contributing to development of the state in one way or another? How, every year, thousands pour into the holy land that is Lagos for healing and spiritual refilling.

Many humorously hinted that the reason most good opportunities are located in Lagos is because the city is the Centre of Excellence. This title, I think, stems from the fact that the city is only privileged to be the treasure trove of businesses. Let another city have the influx of businesses that Lagos has had over the years, and we would have to find a new slogan for it. I am of the opinion that when individuals and corporate organizations go into Lagos to set up new businesses or opportunities, despite the fact that the city is already saturated, they do it out of insecurity, fear. “That is the place you’d find the largest market for everything” is the common excuse. A valid one. But the city is now saturated, supersaturated even, so it is not out of place for these businesses to crystallize out of Lagos and settle in other cities. This is one of the major ways economic growth can permeate into other cities. As long as there are people living in these cities, there will always be viable market and manpower. There is no need to fear.

Because if this doesn’t happen, it shouldn’t come to us as a surprise, like Chizaram Precious―in Machiavelli-esque style―quipped on the post, if Lagos “. . . as Nigeria’s smallest state . . . soon implodes on itself.”

Nafisa Atiku: Young People Are Taking Responsibility for the Future