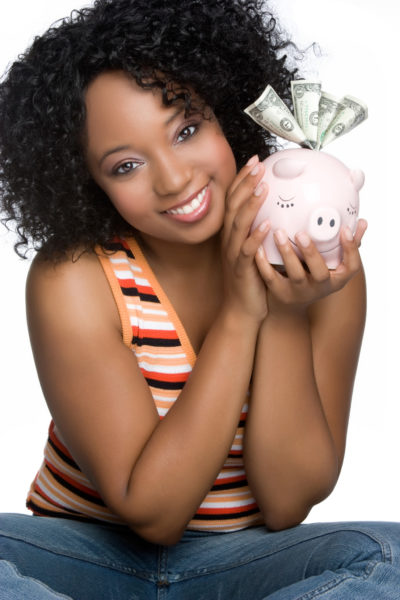 It’s a story I heard often while growing up. It’s a story I still hear often enough. The story sounds the same in every case, to tell one is to tell all. Of course, the specifics differ.

Let’s say a man is the breadwinner of his family. He caters to his family, provides shelter, feeding. But things go awry and he’s suddenly doing badly. He’s broke and can’t provide for his family any longer. Luckily, his wife has a job. She’s doing fine, you know, makes enough to pay the kids’ school fees. Enough to feed the family with, keep a roof over their heads.

It’s important that we look at things not only from the angle of how we’d like them to be, but also examine the circumstances that make them what they are today – especially in Nigeria.

It’s normal for the man to feel some dissatisfaction – no one loses their job and doesn’t hate the world and themselves for it. Maybe it’s even normal, too, for the man’s ego to feel a little bruised. After all, we’ve been socialized to demand security and provision from the husband; to see your wife take up that responsibility can make one feel small, irrelevant. It’s almost like the entire reason for your being has been taken away from you. So, yeah, maybe it makes sense for the ego to be bruised.

But when that extends to the point where you begin to detest your wife, where you begin to demand certain actions of self-abnegation of her that you didn’t demand when you were the breadwinner, only to feed your ego, to make you feel like a man again, then it becomes a problem.

So many examples have been given lately on Twitter: 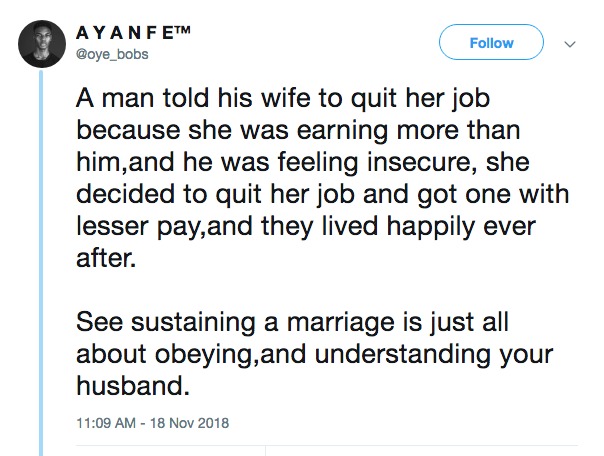 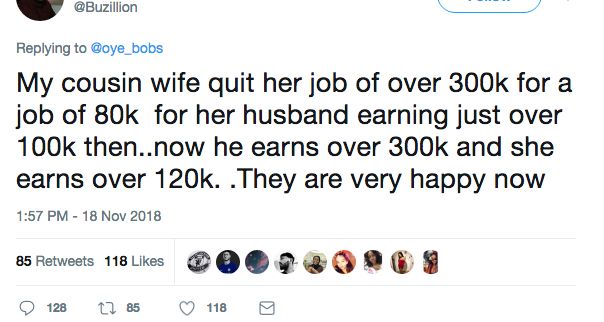 Ours is a society that believes marriage, as an institution, is built around a certain set of rules, and those rules include the income distribution between a couple. A man is the head and the woman has to submit. This somehow has been translated to mean, also, that the man has to make more and the woman, obviously, less. Somehow, it’s been taken to mean a marriage revolves around the happiness of the man.

These tweets show it. “Sustaining a marriage is just all about obeying, and understanding your husband,” the first tweet says. It burdens one person, the woman, with the responsibility of sustaining a relationship between two people. Although they say the man is the head, suddenly it’s the man who’s to sustain it. And how? By obeying and understanding her husband. By keeping him happy, even at the expense of her own happiness.

But, as many replies to these tweets say, is it the responsibility of the woman to make her husband feel like a man?

There were so many other options for the men to explore. The best would have been for them to simply deal with their insecurities, work themselves into getting rid of it. They could also have let all the insecurity push them to working their asses off and earning more. You have an issue with your wife earning more than you do? Well, work harder to earn even more. Rather than use their insecurities to push themselves up, our dear husbands instead brought their wives down.

To an extent, too, the wives are culpable. They decided to quit their jobs to satisfy insecure men. It does question their decision making, but it also questions to what extent they are ready to become breadwinners. It’s very possible that the women simply did not want to be the ones responsible for providing for the family. Everyone’s probably heard it at least once: My money is my money and his money is our money. It’s a lot of responsibility, so it is not out of the question to ask: are women ready to take up that mantle? For my money to become our money.

BN Hot Topic: Uninvited Visitors, Missionaries and the Call to Save the Lost