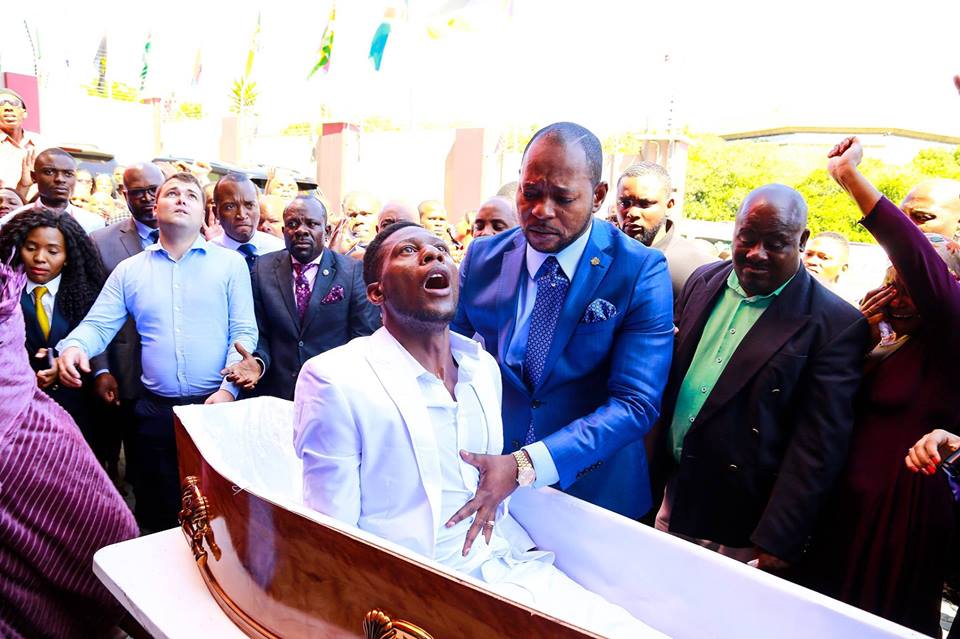 Three funeral firms have said they’ve reported to the police, Pastor Alph Lukau, the Founder and General Overseer Alleluia Ministries International based in Johannesburg, over a resurrection stunt.

Lukau made the rounds on social media after he shared a video of himself raising a man, identified as Elliot, from the dead.

While Pastor Alph Lukau is busy talking, I encourage to concentrate on the mouth of the guy in the coffin then you will decide if he was dead or not.

Maybe this guy can bring back the like of Nelson Mandela, Hector Peterson, Hugh Masekela, Steve Biko, OR Tambo and others. pic.twitter.com/lFoNsM0grO

Kings & Queens Funeral Services said: “Alleged family members of the deceased” told them they had had a “dispute with a different funeral service provider”.

They also said the customers came with “Black Phoenix stickers on their private car” when they wanted to hire a hearse.

Kings and Queens Funeral Parlour manager in Polokwane, Vivien Mponda said that the hearse used to transport the man had been booked for a mechanical service in Johannesburg.

“We are also not part of the people being raised from the dead. We don’t have the records including the death certificate of the alleged deceased. I have been struggling to get hold of the driver to explain what had happened,” Mponda said.

The coffin was purchased from Kingdom Blue.

The funeral firms say they were manipulated into being involved in the whole process.

Prince Mafu, speaking on behalf of the funeral directors said: “It is with regret that the outcome of such a plot has adversely affected our reputation as service providers. We have reported the matter at Jeppe police station for further investigation.”

The church said the “dead” man was actually “already alive” when his “body” got to the premises, according to the news outlet.

Pastor Lukau had only “completed a miracle that God had already started,” Sowetan Live quoted the church’s representatives as saying.

The church has also released an official statement on the issue, saying that at no point did Lukau claim to have resurrected the man. The statement added that before the man was brought to the church, undertakers had said there was movement in the coffin.

However, in the video footage, Lukau said “he died since Friday….” Photos shared on the church’s Facebook page were also captioned “A DEAD man comes back to life with Pastor Alph Lukau.”

Meanwhile, the video has kicked off the #ResurrectionChallenge trend and social media users are having a good laugh about it.